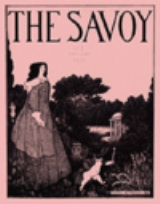 The Savoy was a magazine of literature, art, and criticism published in 1896 in London. It featured work by authors such as W. B. Yeats, Max Beerbohm
Max Beerbohm
Sir Henry Maximilian "Max" Beerbohm was an English essayist, parodist and caricaturist best known today for his 1911 novel Zuleika Dobson.-Early life:...
, Joseph Conrad
Joseph Conrad
Joseph Conrad was a Polish-born English novelist.Conrad is regarded as one of the great novelists in English, although he did not speak the language fluently until he was in his twenties...
, and Aubrey Beardsley
Aubrey Beardsley
Aubrey Vincent Beardsley was an English illustrator and author. His drawings, done in black ink and influenced by the style of Japanese woodcuts, emphasized the grotesque, the decadent, and the erotic. He was a leading figure in the Aesthetic movement which also included Oscar Wilde and James A....
. Only eight issues of the magazine were published. The publisher was Leonard Smithers
Leonard Smithers
Leonard Smithers was a London publisher associated with the Decadent movement. Born in Sheffield, he worked as a solicitor, qualifying in 1884, and became friendly with the explorer and orientalist Sir Richard Francis Burton. He published Burton's translation of the Book of One Thousand and One...
, a controversial friend of Oscar Wilde
Oscar Wilde
Oscar Fingal O'Flahertie Wills Wilde was an Irish writer and poet. After writing in different forms throughout the 1880s, he became one of London's most popular playwrights in the early 1890s...
who was also known as a pornographer. Among other publications by Smithers were rare erotic works and unique items such as books bound in human skin.

The magazine was started by Smithers, writer Arthur Symons
Arthur Symons
Arthur William Symons , was a British poet, critic and magazine editor.-Life:Born in Milford Haven, Wales, of Cornish parents, Symons was educated privately, spending much of his time in France and Italy...
(The Symbolist Movement In Literature) and artist Aubrey Beardsley
Aubrey Beardsley
Aubrey Vincent Beardsley was an English illustrator and author. His drawings, done in black ink and influenced by the style of Japanese woodcuts, emphasized the grotesque, the decadent, and the erotic. He was a leading figure in the Aesthetic movement which also included Oscar Wilde and James A....
. It is considered a little magazine, and was described as "a manifesto in revolt against Victorian materialism".

Symons attempted to distance the magazine from the Decadent movement
Decadent movement
The Decadent movement was a late 19th century artistic and literary movement of Western Europe. It flourished in France, but also had devotees in England and throughout Europe, as well as in the United States.-Overview:...
and imprisoned Oscar Wilde by writing, "We are not Realists, or Romanticists, or Decadents" in his editorial note in the first issue. However, he went on to write, "For us, all art is good which is good art," which is very similar to the Decadent creed of "art for art's sake."
The source of this article is wikipedia, the free encyclopedia.  The text of this article is licensed under the GFDL.