The Hundred Year Association of New York, founded in 1927, is a non-profit organization
Non-profit organization
Nonprofit organization is neither a legal nor technical definition but generally refers to an organization that uses surplus revenues to achieve its goals, rather than distributing them as profit or dividends...
in New York City
New York City
New York is the most populous city in the United States and the center of the New York Metropolitan Area, one of the most populous metropolitan areas in the world. New York exerts a significant impact upon global commerce, finance, media, art, fashion, research, technology, education, and...
aimed at recognizing and rewarding dedication and service to the City of New York by businesses and organizations that have been in operation in the city for a century or more and by individuals who have devoted their lives to the city as city employees.

The Association also provides services to its members to promote to the public their history and contributions to the educational and civic affairs of New York and to preserve, foster and perpetuate high ideals and worthy traditions that have been handed down through the years in the business and professional life of the city. It also stands ready to use the background of experience of its members for the common good as opportunity arises; and to aid and counsel those less experienced whose success would contribute substantially to the City’s business and civic fabric.

Any association, corporation, partnership or individual proprietorship whose continuity in its own right, or as successor to an organization in business for over 100 years is eligible for membership. Organizations 75 years or older may join as associate members.

The Association is led by elected officers and a Board of Governors. The most recent Chairman, Richard A. Cook, died in June 2007 after a long illness. The current President is Clinton W. Blume, III. The Association's Executive Director is Luke Vander Linden.

Past presidents have included James A. Farley.

Initiated in 1958, the Association grants the 'Isaac Liberman Public Service Awards' annually to career New York City
New York City
New York is the most populous city in the United States and the center of the New York Metropolitan Area, one of the most populous metropolitan areas in the world. New York exerts a significant impact upon global commerce, finance, media, art, fashion, research, technology, education, and...
civil servants who have excelled beyond their normal duties during the course of the year. Employees are nominated by their supervisor and department's commissioner or director and awards are determined by the Association's Awards Committee in conjunction with the City of New York's Department of Citywide Administrative Services.

The public service awards are named for Isaac Liberman, founder of The Hundred Year Association when he was president of Arnold Constable Stores in Brooklyn.

More than $1,200,000 has been granted since the awards program’s inception.

Each year since 1930, The Association has presented its 'Gold Medal Award' "in recognition of outstanding contributions to the City of New York." While typically presented to a single individual, the award has been granted on occasion to more than one person or an organization.

Past winners have been:

1934 Robert Moses
Robert Moses
Robert Moses was the "master builder" of mid-20th century New York City, Long Island, Rockland County, and Westchester County, New York. As the shaper of a modern city, he is sometimes compared to Baron Haussmann of Second Empire Paris, and is one of the most polarizing figures in the history of... 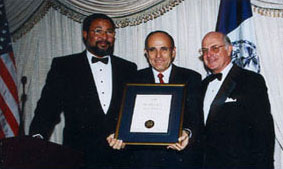 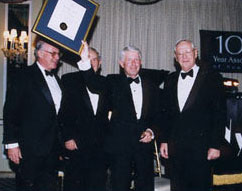 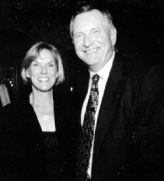 1984 J. Peter Grace
J. Peter Grace
Joseph Peter Grace was a multimillionaire American industrialist and conglomerateur of Irish Catholic heritage. He was president of the diversified chemical company, ' for 48 years, making him the longest reigning CEO of a public company.Born in Manhasset, New York, he succeeded his father, Joseph... 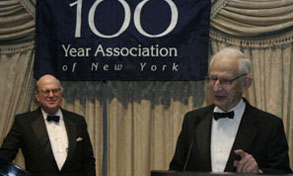