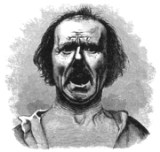 Encyclopedia
The Expression of the Emotions in Man and Animals is a book by Charles Darwin
Charles Darwin
Charles Robert Darwin FRS was an English naturalist. He established that all species of life have descended over time from common ancestry, and proposed the scientific theory that this branching pattern of evolution resulted from a process that he called natural selection.He published his theory...
, published in 1872, concerning genetically determined aspects of behaviour. It was published thirteen years after On The Origin of Species and is, along with his 1871 book The Descent of Man, Darwin's main consideration of human origins. Most unusually, Darwin sought out the opinions of some eminent British psychiatrists in the preparation of the book and it is generally regarded as Darwin's main contribution to psychology
Psychology
Psychology is the study of the mind and behavior. Its immediate goal is to understand individuals and groups by both establishing general principles and researching specific cases. For many, the ultimate goal of psychology is to benefit society...
. The Expression of the Emotions is also - like Alice's Adventures in Wonderland
Alice's Adventures in Wonderland
Alice's Adventures in Wonderland is an 1865 novel written by English author Charles Lutwidge Dodgson under the pseudonym Lewis Carroll. It tells of a girl named Alice who falls down a rabbit hole into a fantasy world populated by peculiar, anthropomorphic creatures...
(1865) - an important landmark in the history of book illustration
Book illustration
The book illustration is specific type of illustration, which appears in books. Some of modern illustrations are performed by American Society of Children's Book Writers and Illustrators....
.


History of the Book 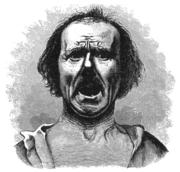 In July 1838 - a few days after Queen Victoria's coronation - Charles Darwin opened his private notebook on "metaphysics" (philosophical speculation) - the M Notebook - and, over the next three months, filled it with his thoughts about the possible interaction of hereditary factors with the mental and behavioural aspects of human and animal life. The critical importance of this notebook has been customarily viewed in its relationship to Darwin's conception of natural selection
Natural selection
Natural selection is the nonrandom process by which biologic traits become either more or less common in a population as a function of differential reproduction of their bearers. It is a key mechanism of evolution....
as the central mechanism of evolutionary development - which he seems to have grasped in September 1838. Another striking aspect of these notes is their tentative and fragmented quality which finds its fullest expression in Darwin's descriptions of conversation with his father (a successful doctor with a special interest in psychiatric illness) about recurring patterns of behaviour in succeeding generations of his patients' families. Darwin was anxious about the materialistic drift in his thinking - and of the disrepute which this could attract in early Victorian England - at the time, he was mentally preparing for marriage with his cousin Emma Wedgwood who was possessed of refined Christian sensibilities. On 21 September 1838, Darwin recorded a confused and disturbing dream in which he was involved in a public execution at which the corpse came to life and claimed to have faced death like a hero. The point which emerges is that Darwin arrived at some central aspects of evolutionary theory at the exact moment in which he was considering - almost obsessively - a scientific understanding of human behaviour and family life. A full discussion of the significance of Darwin's early notebooks - together with an annotated presentation of their text - can be found in Paul H. Barrett's Metaphysics, Materialism and the Evolution of Mind - Early Writings of Charles Darwin (1980).

Little of this was to surface in On The Origin of Species in 1859, although Chapter 7 contains a mildly expressed argument concerning the nature of instinctive behaviour. In the public management of his evolutionary theory, Darwin understood that its relevance to human emotional life could carry explosively negative consequences. Nevertheless, while preparing the text of The Variation of Animals and Plants under Domestication
The Variation of Animals and Plants under Domestication
The Variation of Animals and Plants under Domestication is a book written by Charles Darwin that was first published in January 1868.A large proportion of the book contains detailed information on the domestication of animals and plants but it also contains in Chapter XXVII a description of...
in 1866, Darwin took the decision to focus his public statement of evolutionary biology with a book on human ancestry, sexual selection and secondary sexual characteristics including emotional expression. After his initial correspondence with the psychiatrist James Crichton-Browne
James Crichton-Browne
Sir James Crichton-Browne MD FRS was a leading British psychiatrist famous for studies on the relationship of mental illness to neurological damage and for the development of public health policies in relation to mental health...
Darwin set aside his material concerning emotional expression in order to complete The Descent of Man which covered human ancestry and sexual selection. Darwin concluded work on The Descent of Man on 15th January 1871. On 17th January 1871, he started work on his newly independent book The Expression of the Emotions, employing the unused material on emotional expression; and, on 22nd August 1872, he finished work on the proofs. In this way, Darwin brought his evolutionary theory into close approximation with behavioural science, although many Darwin scholars have remarked on a kind of spectral Lamarckism
Lamarckism
Lamarckism is the idea that an organism can pass on characteristics that it acquired during its lifetime to its offspring . It is named after the French biologist Jean-Baptiste Lamarck , who incorporated the action of soft inheritance into his evolutionary theories...
haunting the text of the Emotions.

Structure of the Book


Cultural Relations of the Book

A second edition was published by Darwin's son around 1889. It did not contain several revisions wanted by Darwin, which were not published until the third edition of 1999 (edited by Paul Ekman
Paul Ekman
Paul Ekman is a psychologist who has been a pioneer in the study of emotions and their relation to facial expressions. He has been considered one of the 100 most eminent psychologists of the twentieth century...
).