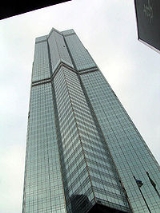 Encyclopedia
The Center is the fifth tallest skyscraper
Skyscraper
A skyscraper is a tall, continuously habitable building of many stories, often designed for office and commercial use. There is no official definition or height above which a building may be classified as a skyscraper...
in Hong Kong
Hong Kong
Hong Kong is one of two Special Administrative Regions of the People's Republic of China , the other being Macau. A city-state situated on China's south coast and enclosed by the Pearl River Delta and South China Sea, it is renowned for its expansive skyline and deep natural harbour...
, after International Commerce Centre
International Commerce Centre
The International Commerce Centre is a 108 floor, skyscraper completed in 2010 in West Kowloon, Hong Kong. It is a part of the Union Square project built on top of Kowloon Station. The development is owned and jointly developed by MTR Corporation Limited and Sun Hung Kai Properties, Hong...
, Two International Finance Centre
International Finance Centre
The International Finance Centre is an integrated commercial development on the waterfront of Hong Kong's Central District....
(88 storeys), Central Plaza
Central Plaza, Hong Kong
Central Plaza is the third tallest skyscraper in Hong Kong. With a height of 374 m , Central Plaza is only surpassed by 2 IFC in Central and the ICC in West Kowloon. The building is located at 18 Harbour Road, in Wan Chai on Hong Kong Island...
and Bank of China Tower. With a height of 346 m (1,135 feet), it comprises 73 stories. The Center is one of the few skyscrapers in Hong Kong that is entirely steel-structured with no reinforced concrete core. It is located on Queen's Road Central in the Central and Western District
Central and Western District
The Central and Western District located on northern part of Hong Kong Island is one of the 18 administrative districts of Hong Kong. It had a population of 261,884 in 2001...
, roughly halfway between the MTR
MTR
Mass Transit Railway is the rapid transit railway system in Hong Kong. Originally opened in 1979, the system now includes 211.6 km of rail with 155 stations, including 86 railway stations and 69 light rail stops...
Island Line
Island Line (MTR)
The Island Line is one of 10 lines of the MTR, the mass transit system in Hong Kong. It runs from Sheung Wan in the Central and Western District to Chai Wan in the Eastern District. The line first opened in 31 May 1985...
's Sheung Wan and Central stations. 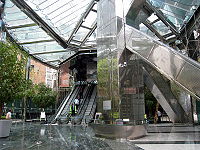 The Center is notable for its arrangement of hundreds of neon
Neon
Neon is the chemical element that has the symbol Ne and an atomic number of 10. Although a very common element in the universe, it is rare on Earth. A colorless, inert noble gas under standard conditions, neon gives a distinct reddish-orange glow when used in either low-voltage neon glow lamps or...
lights arranged as bars in increasing frequency towards the top of the building, which slowly scroll through the colours of the spectrum at night. During the Christmas
Christmas
Christmas or Christmas Day is an annual holiday generally celebrated on December 25 by billions of people around the world. It is a Christian feast that commemorates the birth of Jesus Christ, liturgically closing the Advent season and initiating the season of Christmastide, which lasts twelve days...
season, the building's neon arrangement follows a festive motif and resembles a Christmas tree
Christmas tree
The Christmas tree is a decorated evergreen coniferous tree, real or artificial, and a tradition associated with the celebration of Christmas. The tradition of decorating an evergreen tree at Christmas started in Livonia and Germany in the 16th century...
.

The direct translation of the Chinese name of the building is "Central Centre" or the "centre of Central", even though the building is in fact near the boundary of Central
Central, Hong Kong
Central is the central business district of Hong Kong. It is located in Central and Western District, on the north shore of Hong Kong Island, across Victoria Harbour from Tsim Sha Tsui, the southernmost point of Kowloon Peninsula...
and Sheung Wan
Sheung Wan
Sheung Wan is an area in Hong Kong, located in the north-west of Hong Kong Island, between Central and Sai Ying Pun. Administratively, it is part of the Central and Western District...
(Wing Kut Street
Wing Kut Street
Wing Kut Street is a border street of Sheung Wan and Central extended from Aberdeen Street on the Hong Kong Island, Hong Kong. It is also a street market.-See also:*List of streets and roads in Hong Kong...
).

In addition, several historical structures were demolished from the project. Many cloth shops located on Wing On Street, also known as Cloth Alley, were moved to the Western Market
Western Market
Western Market is one of the oldest structures in Sheung Wan, Hong Kong Island, Hong Kong. The current structure was the North Block of the original Western Market. It is the oldest surviving market building in the city...
while Eu Yan Sang
Eu Yan Sang
Eu Yan Sang is a company that specialises in traditional Chinese medicine. It currently runs more than 160 retail outlets in Hong Kong, Macau, China, Malaysia, and Singapore, plus two factories in Hong Kong and Malaysia...
, a traditional Chinese medicine shop, was moved near the Stag Building to continue business.