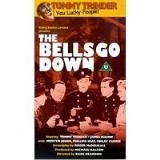 Encyclopedia
The Bells Go down is a black-and-white wartime film made by Ealing Studios
Ealing Studios
Ealing Studios is a television and film production company and facilities provider at Ealing Green in West London. Will Barker bought the White Lodge on Ealing Green in 1902 as a base for film making, and films have been made on the site ever since...
in 1943. The reference in the title is to the alarm bells in the fire station that "go down" when a call to respond is made. The film is an ensemble
Ensemble cast
An ensemble cast is made up of cast members in which the principal actors and performers are assigned roughly equal amounts of importance and screen time in a dramatic production. This kind of casting became more popular in television series because it allows flexibility for writers to focus on...
piece that covers the period of time between August 27, 1939, and September 9, 1940, when World War II began and London was subjected to aerial bombing, and is a tribute to the solidarity of not just those engaged in service, but among the British people as a whole.

It was produced by Michael Balcon
Michael Balcon
Sir Michael Elias Balcon was an English film producer, known for his work with Ealing Studios.-Background:...
and directed by Basil Dearden
Basil Dearden
Basil Dearden was an English film director.-Life and career:Dearden was born at Westcliff-on-Sea, Essex. He graduated from theatre direction to film, working as an assistant to Basil Dean...
and was intended to give praise to the British
United Kingdom
The United Kingdom of Great Britain and Northern IrelandIn the United Kingdom and Dependencies, other languages have been officially recognised as legitimate autochthonous languages under the European Charter for Regional or Minority Languages...
Auxiliary Fire Service
Auxiliary Fire Service
The Auxiliary Fire Service was first formed in 1938 in Great Britain as part of Civil Defence Air raid precautions. Its role was to supplement the work of brigades at local level. In this job it was hampered severely by the incompatibility of equipment used by these different brigades - most...
(AFS). Although a fictional plot employing fictitious landmarks and localities, many of the incidental shots were taken at actual fires that were started during the air raids
Strategic bombing
Strategic bombing is a military strategy used in a total war with the goal of defeating an enemy nation-state by destroying its economic ability and public will to wage war rather than destroying its land or naval forces...
on London
London
London is the capital city of :England and the :United Kingdom, the largest metropolitan area in the United Kingdom, and the largest urban zone in the European Union by most measures. Located on the River Thames, London has been a major settlement for two millennia, its history going back to its...
in the previous two years. A sub-plot depicted the rivalry between the part-time AFS and the full time London Fire Brigade
London Fire Brigade
The London Fire Brigade is the statutory fire and rescue service for London.Founded in 1865, it is the largest of the fire services in the United Kingdom and the fourth-largest in the world with nearly 7,000 staff, including 5,800 operational firefighters based in 112 fire...
(the two brigades merged into the National Fire Service
National Fire Service
The National Fire Service was the single fire service created in Great Britain in 1941 during the Second World War; a separate National Fire Service was created in 1942....
in 1941). The reasons for joining the service, the training and finally the work and tragedy during September 1940 blitz on London
The Blitz
The Blitz was the sustained strategic bombing of Britain by Nazi Germany between 7 September 1940 and 10 May 1941, during the Second World War. The city of London was bombed by the Luftwaffe for 76 consecutive nights and many towns and cities across the country followed...
were shown for several characters. A background narration was spoken by Leo Genn.

On September 3, 1939, at the start of World War II, several East End Londoners
East End of London
The East End of London, also known simply as the East End, is the area of London, England, United Kingdom, east of the medieval walled City of London and north of the River Thames. Although not defined by universally accepted formal boundaries, the River Lea can be considered another boundary...
join the London County Council
London County Council
London County Council was the principal local government body for the County of London, throughout its 1889–1965 existence, and the first London-wide general municipal authority to be directly elected. It covered the area today known as Inner London and was replaced by the Greater London Council...
Auxiliary Fire Service. Tommy Turk (Trinder) is a light-hearted gambler who avoids work, living with his mother (Varley) who runs a local fish and chips
Fish and chips
Fish and chips is a popular take-away food in the United Kingdom, Australia, New Zealand and Canada...
shop. Tommy has bought a greyhound
Greyhound
The Greyhound is a breed of sighthound that has been primarily bred for coursing game and racing, and the breed has also recently seen a resurgence in its popularity as a pedigree show dog and family pet. It is a gentle and intelligent breed...
pup he names "Short Head" and hopes to race. Bob Matthews (Friend) is a newcomer to the East End who just lost his job and has to postpone his wedding to Nan Harper (Hiatt) as a result. Tommy and Bob meet in The Hopvine, a pub run by Ma and Pa Robbins (Muriel George and Pierce), whose son Ted (Mason) is a fireman with the London Fire Brigade. Ted's girl Susie has just joined the brigade as a dispatcher
Dispatcher
Dispatchers are communications personnel responsible for receiving and transmitting pure and reliable messages, tracking vehicles and equipment, and recording other important information...
, but Ma Robbins' cannot hide her thinly disguised disapproval of Susie's love of dance hall
Dance hall
Dance hall in its general meaning is a hall for dancing. From the earliest years of the twentieth century until the early 1960s, the dance hall was the popular forerunner of the discothèque or nightclub...
s. The Army won't accept new enlistments, so Tommy persuades Bob to join the AFS with him. Sam, a small-time thief of Guinness
Guinness
Guinness is a popular Irish dry stout that originated in the brewery of Arthur Guinness at St. James's Gate, Dublin. Guinness is directly descended from the porter style that originated in London in the early 18th century and is one of the most successful beer brands worldwide, brewed in almost...
, inadvertently joins the service trying to avoid the clutches of Eastchapel Police Constable O'Brien (Richard George), who dogs him with the persistence of Javert
Javert
Javert is a fictional character from the novel Les Misérables by Victor Hugo. He is a prison guard, and later policeman, who devotes his life to the law. He is always referred to just simply as "Javert" or "Inspector Javert" by the narrator and other characters throughout the novel; his first name...
. The three are assigned immediately to the "Q" sub-station of the East End's District 21, set up in a school to train under Ted.

"Q sub" responds to its first call at Christmas. Although the fire is out when they arrive, crusty District Officer MacFarlane (Currie) is impressed with Ted's efforts and posts him, along with Tommy, Sam, and Bob, as a crew at District 21's superintendent's station. Nan and Bob finally marry and take a flat
Apartment
An apartment or flat is a self-contained housing unit that occupies only part of a building...
near Benjamin's Wharf. She becomes pregnant, suffering fainting spells, and befriends Ma Turk. Ted is reluctant to marry, so Susie goes dancing with ladies' man Tommy as a means of making Ted jealous, while Ted rides Tommy for his apparent aversion to fighting fires. Tommy races Short Head, who perpetually loses, costing not just Tommy, but his fellow firemen who have wagered on her. Tommy continues to steal barrels of Guinness, but O'Brien begins to close in.

In August 1940 the Battle of Britain
Battle of Britain
The Battle of Britain is the name given to the World War II air campaign waged by the German Air Force against the United Kingdom during the summer and autumn of 1940...
is raging, but London has not been bombed. The 21-Q crew still have yet to fight a serious fire and has become sensitive about it. Tommy discovers Short Head has been losing because Ma Turk has been feeding her doughnut
Doughnut
A doughnut or donut is a fried dough food and is popular in many countries and prepared in various forms as a sweet snack that can be homemade or purchased in bakeries, supermarkets, food stalls, and franchised specialty outlets...
s, and he enters her in a high-stakes race on September 7, planning to wager all his money. His plans are interrupted that afternoon by the first massive German air raid on London, which targets the East End Docks. The widespread fires cause chaos as water lines are broken and AFS crews are pressed into front-line service. Ted saves Tommy's life by using a high-pressure hose to knock him away from a delay-action bomb
Delay-action bomb
A delay-action bomb is an aerial bomb designed to explode some time after impact, with the bomb's fuzes set to delay the explosion for times ranging from very brief to several weeks...
just before it explodes. The second night of the blitz, the 21-Q crew, still struggling to bring the Docks' fire under control, have forged bonds with their full-time counterparts and officers in action. Ted's parents are unaccounted for, and Susie goes to find them. The Hopvine has been bombed, but through Susie's persistence, they are found in the cellar and rescued. The next morning, during a break, Tommy learns that Short Hand won her race—but he forgot to place the wager.

The third night German bombers return again, creating a huge fire at Benjamin's Wharf, and the District 21 crews are shifted there. Bob ironically finds himself fighting a warehouse fire from his inside own burning flat, which has been declared expendable. However he takes comfort in the knowledge that Nan, about to give birth, is safe with Ma Turk at St John's Hospital. P.C. O'Brien arrives to arrest Sam, but a bomb explosion blows him into the Thames River, where Sam rescues him from drowning. Soon they learn that St. John's Hospital is also on fire. Chief MacFarlane transfers Ted's crew to the hospital fire and enters the burning building to direct efforts to save the main building. Bob learns that Nan is safe and he has a new son. Another bomb strikes the hospital, trapping Chief MacFarlane. Tommy beats Ted to the ladder and finds the chief, but the building collapses, killing both. Some time after the fire is out, all the survivors and their families gather to christen the baby, who Nan and Bob have decided to name "Tommy".