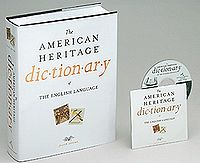 The American Heritage Dictionary of the English Language (AHD) is an American
American English
American English is a set of dialects of the English language used mostly in the United States. Approximately two-thirds of the world's native speakers of English live in the United States....
dictionary
Dictionary
A dictionary is a collection of words in one or more specific languages, often listed alphabetically, with usage information, definitions, etymologies, phonetics, pronunciations, and other information; or a book of words in one language with their equivalents in another, also known as a lexicon...
of the English language
English language
English is a West Germanic language that arose in the Anglo-Saxon kingdoms of England and spread into what was to become south-east Scotland under the influence of the Anglian medieval kingdom of Northumbria...
published by Boston publisher Houghton Mifflin, the first edition of which appeared in 1969. Its creation was spurred by the controversy over the Webster's Third New International Dictionary.

James Parton, the owner of the history magazine American Heritage
American Heritage (magazine)
American Heritage is a quarterly magazine dedicated to covering the history of the United States for a mainstream readership. Until 2007, the magazine was published by Forbes. Since that time, Edwin S...
, was appalled by the permissiveness of Webster's Third, published in 1961, and tried to buy the G. and C. Merriam
Merriam-Webster
Merriam–Webster, which was originally the G. & C. Merriam Company of Springfield, Massachusetts, is an American company that publishes reference books, especially dictionaries that are descendants of Noah Webster’s An American Dictionary of the English Language .Merriam-Webster Inc. has been a...
Company so he could undo the changes. When that failed, he contracted with Houghton to publish a new dictionary. The AHD was edited by William Morris and relied on a usage panel of 105 writers, speakers, and eminent persons chosen for their well-known conservatism in the use of language. However Morris made inconsistent use of the panels, often ignoring their advice and inserting his own opinions.

Citations were based on a million-word, three-line citation database prepared by Brown University
Brown University
Brown University is a private, Ivy League university located in Providence, Rhode Island, United States. Founded in 1764 prior to American independence from the British Empire as the College in the English Colony of Rhode Island and Providence Plantations early in the reign of King George III ,...
linguist Henry Kucera
Henry Kucera
Henry Kučera, born Jindřich Kučera was a Czech linguist who was a pioneer in corpus linguistics and linguistic software....
.

For expert consultation on words or constructions whose usage is controversial or problematic, the American Heritage Dictionary relies on the advice of a usage panel. In its current form, the panel consists of 200 prominent members of professions whose work demands sensitivity to language. Present and former members of the usage panel include novelists (Isaac Asimov
Isaac Asimov
Isaac Asimov was an American author and professor of biochemistry at Boston University, best known for his works of science fiction and for his popular science books. Asimov was one of the most prolific writers of all time, having written or edited more than 500 books and an estimated 90,000...
, Barbara Kingsolver
Barbara Kingsolver
Barbara Kingsolver is an American novelist, essayist and poet. She was raised in rural Kentucky and lived briefly in the former Republic of Congo in her early childhood. Kingsolver earned degrees in biology at DePauw University and the University of Arizona and worked as a freelance writer before...
, David Foster Wallace
David Foster Wallace
David Foster Wallace was an American author of novels, essays, and short stories, and a professor at Pomona College in Claremont, California...
, and Eudora Welty
Eudora Welty
Eudora Alice Welty was an American author of short stories and novels about the American South. Her novel The Optimist's Daughter won the Pulitzer Prize in 1973. Welty was awarded the Presidential Medal of Freedom, among numerous awards. She was the first living author to have her works published...
), poets (Rita Dove
Rita Dove
Rita Frances Dove is an American poet and author. From 1993-1995 she served as Poet Laureate Consultant in Poetry to the Library of Congress, a position now popularly known as "U.S. Poet Laureate"...
, Galway Kinnell
Galway Kinnell
Galway Kinnell is an American poet. He was Poet Laureate of Vermont from 1989 to 1993. An admitted follower of Walt Whitman, Kinnell rejects the idea of seeking fulfillment by escaping into the imaginary world. His best-loved and most anthologized poems are "St...
, Mary Oliver
Mary Oliver
Mary Oliver is an American poet who has won the National Book Award and the Pulitzer Prize. The New York Times described her as "far and away, this country's [America's] best-selling poet".-Early life:...
, and Robert Pinsky
Robert Pinsky
Robert Pinsky is an American poet, essayist, literary critic, and translator. From 1997 to 2000, he served as Poet Laureate Consultant in Poetry to the Library of Congress. Pinsky is the author of nineteen books, most of which are collections of his own poetry...
) playwrights (Terrence McNally
Terrence McNally
Terrence McNally is an American playwright who has received four Tony Awards, an Emmy, two Guggenheim Fellowships, a Rockefeller Grant, the Lucille Lortel Award, the Hull-Warriner Award, and a citation from the American Academy of Arts and Letters. He has been a member of the Council of the...
and Marsha Norman
Marsha Norman
Marsha Norman is an American playwright, screenwriter, and novelist. She received the 1983 Pulitzer Prize for Drama for her play night, Mother...
), journalists (Liane Hansen
Liane Hansen
Liane Hansen is an American journalist and radio personality who was senior host of the National Public Radio newsmagazine Weekend Edition Sunday until her retirement in May 2011...
and Susan Stamberg
Susan Stamberg
Susan Stamberg is an American radio journalist who is currently a Special Correspondent for National Public Radio and guest host for Weekend Edition Saturday.Stamberg was born in Newark, New Jersey...
), literary critics (Harold Bloom
Harold Bloom
Harold Bloom is an American writer and literary critic, and is Sterling Professor of Humanities at Yale University. He is known for his defense of 19th-century Romantic poets, his unique and controversial theories of poetic influence, and his prodigious literary output, particularly for a literary...
), columnists and commentators (William F. Buckley, Jr.
William F. Buckley, Jr.
William Frank Buckley, Jr. was an American conservative author and commentator. He founded the political magazine National Review in 1955, hosted 1,429 episodes of the television show Firing Line from 1966 until 1999, and was a nationally syndicated newspaper columnist. His writing was noted for...
, and Robert J. Samuelson
Robert J. Samuelson
Robert Jacob Samuelson is a contributing editor of Newsweek and The Washington Post where he has written about business and economic issues since 1977. His columns appear in both publications. His articles also appear in the Los Angeles Times, The Boston Globe, and other influential newspapers...
), linguists and cognitive scientists (Steven Pinker
Steven Pinker
Steven Arthur Pinker is a Canadian-American experimental psychologist, cognitive scientist, linguist and popular science author...
and Calvert Watkins
Calvert Watkins
Calvert Watkins is a professor Emeritus of linguistics and the classics at Harvard University and professor-in-residence at UCLA.His doctoral dissertation, Indo-European Origins of the Celtic Verb I...
), and humorists (Garrison Keillor
Garrison Keillor
Gary Edward "Garrison" Keillor is an American author, storyteller, humorist, and radio personality. He is known as host of the Minnesota Public Radio show A Prairie Home Companion Gary Edward "Garrison" Keillor (born August 7, 1942) is an American author, storyteller, humorist, and radio...
and David Sedaris
David Sedaris
David Sedaris is a Grammy Award-nominated American humorist, writer, comedian, bestselling author, and radio contributor....
).

The members of the panel are sent regular ballots asking about matters of usage; the completed ballots are returned and tabulated, and the results form the basis for special usage notes appended to the relevant dictionary entries. In many cases, these notes not only report the percentage of panelists who consider a given usage or construction to be acceptable, but will also report the results from balloting of the same question in past decades, to give a clearer sense of how the language changes over time.

The AHD is also somewhat innovative in its liberal use of photographic illustrations, which at the time was highly unusual for general reference dictionaries, many of which went largely or completely unillustrated. It also has an unusually large number of biographical entries for notable persons.

The first edition appeared in 1969, highly praised for its Indo-European
Indo-European languages
The Indo-European languages are a family of several hundred related languages and dialects, including most major current languages of Europe, the Iranian plateau, and South Asia and also historically predominant in Anatolia...
etymologies
Etymology
Etymology is the study of the history of words, their origins, and how their form and meaning have changed over time.For languages with a long written history, etymologists make use of texts in these languages and texts about the languages to gather knowledge about how words were used during...
. In addition to the normally expected etymologies, which for instance trace the word ambiguous to a Proto-Indo-European
Proto-Indo-European language
The Proto-Indo-European language is the reconstructed common ancestor of the Indo-European languages, spoken by the Proto-Indo-Europeans...
root
Root
In vascular plants, the root is the organ of a plant that typically lies below the surface of the soil. This is not always the case, however, since a root can also be aerial or aerating . Furthermore, a stem normally occurring below ground is not exceptional either...
ag-, meaning "to drive," the appendices included a seven-page article by Professor Calvert Watkins
Calvert Watkins
Calvert Watkins is a professor Emeritus of linguistics and the classics at Harvard University and professor-in-residence at UCLA.His doctoral dissertation, Indo-European Origins of the Celtic Verb I...
entitled "Indo-European and the Indo-Europeans" and "Indo-European Roots", 46 pages of entries that are each organized around one of some thousand Proto-Indo-European roots and the English words of the AHD that are understood to have evolved from them. These entries might be called "reverse etymologies": the ag- entry there, for instance lists 49 words derived from it, as diverse as agent, essay, purge, stratagem, ambassador, axiom, and pellagra, along with information about varying routes through intermediate transformations on the way to the contemporary words.

The AHD has a long tradition of inserting minor revisions (such as a biographical entry, with photograph, for each newly elected U.S. President) in successive printings of any given edition.

The most recent edition, the Fifth Edition, was published in November 2011.