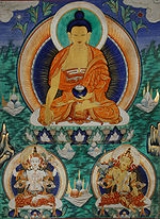 I have a thangka on my wall but i was wondering what 3 budhas in a circle with a wall behind them meen? If any one can help me with this question th...
More

Help us publish a manuscript of traditional Thangka techniques
More 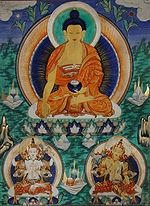 Originally, thangka painting became popular among traveling monks because the scroll paintings were easily rolled and transported from monastery to monastery. These thangka served as important teaching tools depicting the life of the Buddha, various influential lamas and other deities and bodhisattva
Bodhisattva
In Buddhism, a bodhisattva is either an enlightened existence or an enlightenment-being or, given the variant Sanskrit spelling satva rather than sattva, "heroic-minded one for enlightenment ." The Pali term has sometimes been translated as "wisdom-being," although in modern publications, and...
s. One popular subject is The Wheel of Life, which is a visual representation of the Abhidharma
Abhidharma
Abhidharma or Abhidhamma are ancient Buddhist texts which contain detailed scholastic and scientific reworkings of doctrinal material appearing in the Buddhist Sutras, according to schematic classifications...
teachings (Art of Enlightenment).

To Buddhists these Tibetan religious paintings offer a beautiful manifestation of the divine, being both visually and mentally stimulating.

Thangka, when created properly, perform several different functions. Images of deities can be used as teaching tools when depicting the life (or lives) of the Buddha, describing historical events concerning important Lamas, or retelling myths associated with other deities. Devotional images act as the centerpiece during a ritual or ceremony and are often used as mediums through which one can offer prayers or make requests. Overall, and perhaps most importantly, religious art is used as a meditation tool to help bring one further down the path to enlightenment. The Buddhist Vajrayana
Vajrayana
Vajrayāna Buddhism is also known as Tantric Buddhism, Tantrayāna, Mantrayāna, Secret Mantra, Esoteric Buddhism and the Diamond Vehicle...
practitioner uses a thanga image of their yidam
Yidam
In Vajrayana Buddhism, an Ishta-deva or Ishta-devata is a fully enlightened being who is the focus of personal meditation, during a retreat or for life. The term is often translated into English as tutelary deity, meditation deity, or meditational deity...
, or meditation deity, as a guide, by visualizing “themselves as being that deity, thereby internalizing the Buddha qualities (Lipton, Ragnubs).”

Historians note that Chinese painting
Chinese painting
Chinese painting is one of the oldest continuous artistic traditions in the world. The earliest paintings were not representational but ornamental; they consisted of patterns or designs rather than pictures. Early pottery was painted with spirals, zigzags, dots, or animals...
had a profound influence on Tibetan painting in general. Starting from the 14th and 15th century, Tibetan painting had incorporated many elements from the Chinese, and during the 18th century, Chinese painting had a deep and far-stretched impact on Tibetan visual art. According to Giuseppe Tucci
Giuseppe Tucci
Giuseppe Tucci was an Italian scholar of oriental cultures, specialising in Tibet and history of Buddhism. During its zenith, Tucci was a supporter of Italian Fascism, and he used idealized portrayals of Asian traditions to support Italian ideological campaigns...
, by the time of the Qing Dynasty
Qing Dynasty
The Qing Dynasty was the last dynasty of China, ruling from 1644 to 1912 with a brief, abortive restoration in 1917. It was preceded by the Ming Dynasty and followed by the Republic of China....
, "a new Tibetan art was then developed, which in a certain sense was a provincial echo of the Chinese 18th century's smooth ornate preciosity."

Thangka is a Nepalese art
Newa art
Newa art is the art form practiced over centuries by Newa people. The pictorial art consists of:* Paubha or Thangka* Wall paintings * Paintings on the walls of temples* Paintings in manuscripts...
form exported to Tibet after Princess Bhrikuti
Bhrikuti
The Nepali Princess Bhrikuti Devi, known to Tibetans as Bal-mo-bza' Khri-btsun, Bhelsa Tritsun or, simply, Khri bTsun , is traditionally considered to have been the first wife of the earliest emperor of Tibet, Songtsän Gampo , and an incarnation of Tara...
of Nepal, daughter of King Lichchavi, married Sron Tsan Gampo, the ruler of Tibet imported the images of Aryawalokirteshwar and other Nepalese deities to Tibet.

Based on technique and material, thangkas can be grouped by types. Generally, they are divided into two broad categories: those that are painted (Tib.) bris-tan—and those made of silk, either by appliqué or embroidery.

Thangkas are further divided into these more specific categories:


Whereas typical thangkas are fairly small, between about 18 and 30 inches tall or wide, there are also giant festival thangkas, usually Appliqué, and designed to be unrolled against a wall in a monastery for particular religious occasions. These are likely to be wider than they are tall, and may be sixty or more feet across and perhaps twenty or more high.

Thangkas are painted on cotton
Cotton duck
Cotton duck , also simply duck, sometimes duck cloth or duck canvas, commonly called "canvas" outside the textile industry, is a heavy, plain woven cotton fabric...
or silk. The most common is a loosely woven cotton produced in widths from 40 to 58 centimeters (16 - 23 inches). While some variations do exist, thangkas wider than 45 centimeters (17 or 18 inches) frequently have seams in the support. The paint consists of pigment
Pigment
A pigment is a material that changes the color of reflected or transmitted light as the result of wavelength-selective absorption. This physical process differs from fluorescence, phosphorescence, and other forms of luminescence, in which a material emits light.Many materials selectively absorb...
s in a water soluble medium
Media (arts)
In the arts, a media or medium is a material used by an artist or designer to create a work.-Architecture:In the art and science of architecture, the design and construction of buildings and interiors, infrastructure and other physical structures are created...
. Both mineral and organic pigments are used, tempered with a herb and glue solution. In Western terminology, this is a distemper
Distemper (paint)
Distemper is a term with a variety of meanings for paints used in decorating and as a historical medium for painting pictures. The binding element may be some form of glue or oil; these are known in decorating respectively as soft distemper and oil bound distemper.-Soft distemper:Distemper is an...
technique.

The composition of a thangka, as with the majority of Buddhist art
Buddhist art
Buddhist art originated on the Indian subcontinent following the historical life of Siddhartha Gautama, 6th to 5th century BC, and thereafter evolved by contact with other cultures as it spread throughout Asia and the world....
, is highly geometric. Arms, legs, eyes, nostrils, ears, and various ritual implements are all laid out on a systematic grid of angles and intersecting lines. A skilled thangka artist will generally select from a variety of predesigned items to include in the composition, ranging from alms bowls and animals, to the shape, size, and angle of a figure's eyes, nose, and lips. The process seems very methodical, but often requires deep understanding of the symbolism involved to capture the spirit of it.

Thangka often overflow with symbolism and allusion. Because the art is explicitly religious, all symbols and allusions must be in accordance with strict guidelines laid out in Buddhist scripture. The artist must be properly trained and have sufficient religious understanding, knowledge, and background to create an accurate and appropriate thangka. Lipton and Ragnubs clarify this in Treasures of Tibetan Art:

“Tibetan art
Tibetan art
Tibetan art refers to the art of Tibet. For more than a thousand years, Tibetan artists have played a key role in the cultural life of Tibet. From designs for painted furniture to elaborate murals in religious buildings, their efforts have permeated virtually every facet of life on the Tibetan...
exemplifies the nirmanakaya, the physical body of Buddha, and also the qualities of the Buddha, perhaps in the form of a deity. Art objects, therefore, must follow rules specified in the Buddhist scriptures regarding proportions, shape, color, stance, hand positions, and attributes in order to personify correctly the Buddha or Deities.”