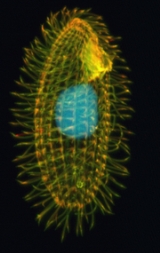 Encyclopedia
Tetrahymena are free-living ciliate
Ciliate
The ciliates are a group of protozoans characterized by the presence of hair-like organelles called cilia, which are identical in structure to flagella but typically shorter and present in much larger numbers with a different undulating pattern than flagella...
protozoa
Protozoa
Protozoa are a diverse group of single-cells eukaryotic organisms, many of which are motile. Throughout history, protozoa have been defined as single-cell protists with animal-like behavior, e.g., movement...
that can also switch from commensalistic
Commensalism
In ecology, commensalism is a class of relationship between two organisms where one organism benefits but the other is neutral...
to pathogenic modes of survival. They are common in fresh-water. Tetrahymena species used as model organisms in biomedical research are T. thermophila and T. pyriformis. 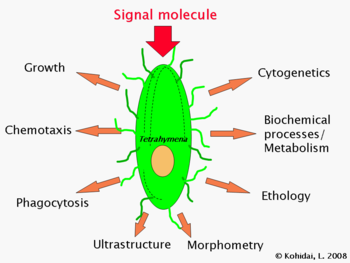 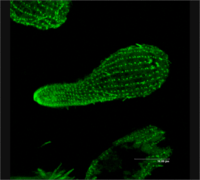 As a ciliated protozoan, Tetrahymena thermophila exhibits striking nuclear dimorphism
Nuclear dimorphism
Nuclear dimorphism is a term referred to the special characteristic of having two different kinds of nuclei in a cell. This feature is observed in protozoa ciliates and some foraminifera. Ciliates contain two nucleus types: a macronucleus that is primarily used to control metabolism, and a...
: two types of cell nuclei, a large, somatic macronucleus
Macronucleus
A macronucleus is the larger type of nucleus in ciliates. Macronuclei are polyploid and undergo direct division without mitosis. It controls the non-reproductive cell functions, the everyday tasks, such as metabolism...
and a small, germline micronucleus
Micronucleus
A the micronucleus is the smaller nucleus in ciliate protozoans, such as the paramecium. In fission it divides by mitosis, and in conjugation furnishes the pairing of gamete nuclei, by whose reciprocal fusion a zygote nucleus is formed, which gives rise to the macronuclei and micronuclei of the...
, exist in a single cell at the same time and carry out different functions with distinct cytological and biochemical properties. This unique versatility allows scientists to use Tetrahymena to identify several key factors regarding gene expression and genome integrity. In addition, Tetrahymena possesses hundreds of cilia and has complicated microtubule
Microtubule
Microtubules are a component of the cytoskeleton. These rope-like polymers of tubulin can grow as long as 25 micrometers and are highly dynamic. The outer diameter of microtubule is about 25 nm. Microtubules are important for maintaining cell structure, providing platforms for intracellular...
structures, making it also an ideal model to elucidate the diversity and functions of microtubule systems.

Since Tetrahymena can be easily cultured in a large quantity in the laboratory, for years it has been a great source for biochemical analysis of important enzymatic activities and for purification of sub-cellular components. In addition, advanced molecular genetic techniques have been developed, including DNA-mediated transformation, gene 'knock-out' and 'knock-in' by homologous recombination
Homologous recombination
Homologous recombination is a type of genetic recombination in which nucleotide sequences are exchanged between two similar or identical molecules of DNA. It is most widely used by cells to accurately repair harmful breaks that occur on both strands of DNA, known as double-strand breaks...
, epitope
Epitope
An epitope, also known as antigenic determinant, is the part of an antigen that is recognized by the immune system, specifically by antibodies, B cells, or T cells. The part of an antibody that recognizes the epitope is called a paratope...
tagging and inducible/repressible gene expression, making it an excellent model to study the gene function in vivo. Recently, the whole macronuclear genome
Genome
In modern molecular biology and genetics, the genome is the entirety of an organism's hereditary information. It is encoded either in DNA or, for many types of virus, in RNA. The genome includes both the genes and the non-coding sequences of the DNA/RNA....
has been sequenced, which should promise Tetrahymena to be continuously utilized as a model system in the genomic and post-genomic era.

Tetrahymena thermophila occurs in 7 different variants (sexes) that can reproduce in 21 different combinations. A sex cannot reproduce sexually with itself.
Studies on Tetrahymena have contributed to several scientific milestones: