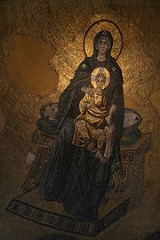 A tessera is an individual tile in a mosaic
Mosaic
Mosaic is the art of creating images with an assemblage of small pieces of colored glass, stone, or other materials. It may be a technique of decorative art, an aspect of interior decoration, or of cultural and spiritual significance as in a cathedral...
, usually formed in the shape of a cube. It is also known as an abaciscus, abaculus, or, in Persian کاشي معرق. In antiquity, mosaics were formed from naturally colored pebble
Pebble
A pebble is a clast of rock with a particle size of 4 to 64 millimetres based on the Krumbein phi scale of sedimentology. Pebbles are generally considered to be larger than granules and smaller than cobbles . A rock made predominantly of pebbles is termed a conglomerate...
s, but by 200 BC purpose-made tesserae were being used. Marble
Marble
Marble is a metamorphic rock composed of recrystallized carbonate minerals, most commonly calcite or dolomite.Geologists use the term "marble" to refer to metamorphosed limestone; however stonemasons use the term more broadly to encompass unmetamorphosed limestone.Marble is commonly used for...
or limestone
Limestone
Limestone is a sedimentary rock composed largely of the minerals calcite and aragonite, which are different crystal forms of calcium carbonate . Many limestones are composed from skeletal fragments of marine organisms such as coral or foraminifera....
was cut into small cubes that were arranged into the design. Later, tesserae were made from colored glass, or clear glass backed with metal foils. The Byzantines used tesserae with gold leaf
Gold leaf
right|thumb|250px|[[Burnishing]] gold leaf with an [[agate]] stone tool, during the water gilding processGold leaf is gold that has been hammered into extremely thin sheets and is often used for gilding. Gold leaf is available in a wide variety of karats and shades...
, in which case the glass pieces were flatter, with two glass pieces sandwiching the gold. This produced a golden reflection emanating from in between the tesserae as well as their front, causing a far richer and more luminous effect than even plain gold leaf would create.