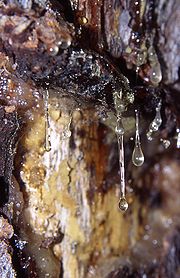 Terpenes are a large and diverse class of organic compounds, produced by a variety of plants, particularly conifers, though also by some insects such as termites or swallowtail butterflies, which emit terpenes from their osmeterium
Osmeterium
The osmeterium is a fleshy organ found in the prothoracic segment of larvae of Swallowtail butterflies including Birdwings. This organ emits smelly compounds believed to be pheromones. Normally hidden, this forked structure can be everted when the caterpillar is threatened, and used to emit a...
. They are often strong smelling and thus may have had a protective function.

When terpenes are modified chemically, such as by oxidation or rearrangement of the carbon skeleton, the resulting compounds are generally referred to as terpenoid
Terpenoid
The terpenoids , sometimes called isoprenoids, are a large and diverse class of naturally occurring organic chemicals similar to terpenes, derived from five-carbon isoprene units assembled and modified in thousands of ways. Most are multicyclic structures that differ from one another not only in...
s. Some authors will use the term terpene to include all terpenoids. Terpenoids are also known as isoprenoids.

Terpenes and terpenoids are the primary constituents of the essential oil
Essential oil
An essential oil is a concentrated hydrophobic liquid containing volatile aroma compounds from plants. Essential oils are also known as volatile oils, ethereal oils or aetherolea, or simply as the "oil of" the plant from which they were extracted, such as oil of clove...
s of many types of plants and flowers. Essential oils are used widely as natural flavor additives for food, as fragrances in perfumery, and in traditional and alternative medicines such as aromatherapy
Aromatherapy
Aromatherapy is a form of alternative medicine that uses volatile plant materials, known as essential oils, and other aromatic compounds for the purpose of altering a person's mind, mood, cognitive function or health....
. Synthetic variations and derivatives of natural terpenes and terpenoids also greatly expand the variety of aromas used in perfumery and flavors used in food additives. Vitamin A
Vitamin A
Vitamin A is a vitamin that is needed by the retina of the eye in the form of a specific metabolite, the light-absorbing molecule retinal, that is necessary for both low-light and color vision...
is an example of a terpene.

Terpenes are released by trees more actively in warmer weather, acting as a natural form of cloud seeding
Cloud seeding
Cloud seeding, a form of intentional weather modification, is the attempt to change the amount or type of precipitation that falls from clouds, by dispersing substances into the air that serve as cloud condensation or ice nuclei, which alter the microphysical processes within the cloud...
. The clouds reflect sunlight, allowing the forest to regulate its temperature.

The aroma and flavor of hops
Hops
Hops are the female flower clusters , of a hop species, Humulus lupulus. They are used primarily as a flavoring and stability agent in beer, to which they impart a bitter, tangy flavor, though hops are also used for various purposes in other beverages and herbal medicine...
, highly desirable in some beers, comes from terpenes. Of the terpenes in hops myrcene, b-pinene, b-caryophyllene, and a-humulene are found in the largest quantities.

Terpenes are derived biosynthetically from units of isoprene
Isoprene
Isoprene , or 2-methyl-1,3-butadiene, is a common organic compound with the formula CH2=CCH=CH2. Under standard conditions it is a colorless liquid...
, which has the molecular formula C5H8. The basic molecular formulae of terpenes are multiples of that, (C5H8)n where n is the number of linked isoprene units. This is called the isoprene rule or the C5 rule. The isoprene units may be linked together "head to tail" to form linear chains or they may be arranged to form rings. One can consider the isoprene unit as one of nature's common building blocks.

Research into terpenes has found that many of them possess qualities that make them ideal active ingredients as part of natural agricultural pesticides.

Terpin hydrate is a derivative of turpentine
Turpentine
Turpentine is a fluid obtained by the distillation of resin obtained from trees, mainly pine trees. It is composed of terpenes, mainly the monoterpenes alpha-pinene and beta-pinene...
. An expectorant and humectant
Humectant
A humectant is a hygroscopic substance. It is often a molecule with several hydrophilic groups, most often hydroxyl groups, but amines and carboxyl groups, sometimes esterified, can be encountered as well; the affinity to form hydrogen bonds with molecules of water is crucial here.Since...
, it is commonly used in the treatment of acute
Acute (medicine)
In medicine, an acute disease is a disease with either or both of:# a rapid onset, as in acute infection# a short course ....
or chronic
Chronic (medicine)
A chronic disease is a disease or other human health condition that is persistent or long-lasting in nature. The term chronic is usually applied when the course of the disease lasts for more than three months. Common chronic diseases include asthma, cancer, diabetes and HIV/AIDS.In medicine, the...
bronchitis
Bronchitis
Acute bronchitis is an inflammation of the large bronchi in the lungs that is usually caused by viruses or bacteria and may last several days or weeks. Characteristic symptoms include cough, sputum production, and shortness of breath and wheezing related to the obstruction of the inflamed airways...
and related conditions.

Terpenes are used by termites
Termite
Termites are a group of eusocial insects that, until recently, were classified at the taxonomic rank of order Isoptera , but are now accepted as the epifamily Termitoidae, of the cockroach order Blattodea...
of the Nasutitermitinae family to attack enemy insects, through the use of a specialized mechanism called a Fontanellar gun
Fontanellar gun
The fontanellar gun is a type of specialized weaponry used by the soldiers of the North American termite subfamily Nasutitermitinae to ward off predators...
.