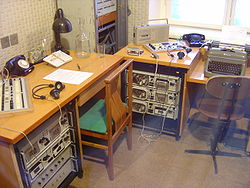 Telephone tapping
Telephone tapping
Telephone tapping is the monitoring of telephone and Internet conversations by a third party, often by covert means. The wire tap received its name because, historically, the monitoring connection was an actual electrical tap on the telephone line...
in the countries of the Eastern Bloc
Eastern bloc
The term Eastern Bloc or Communist Bloc refers to the former communist states of Eastern and Central Europe, generally the Soviet Union and the countries of the Warsaw Pact...
was a widespread method of the mass surveillance
Mass surveillance
Mass surveillance is the pervasive surveillance of an entire population, or a substantial fraction thereof.Modern governments today commonly perform mass surveillance of their citizens, explaining that they believe that it is necessary to protect them from dangerous groups such as terrorists,...
of the population by the secret police
Secret police
Secret police are a police agency which operates in secrecy and beyond the law to protect the political power of an individual dictator or an authoritarian political regime....
.

In Romania
Communist Romania
Communist Romania was the period in Romanian history when that country was a Soviet-aligned communist state in the Eastern Bloc, with the dominant role of Romanian Communist Party enshrined in its successive constitutions...
, telephone
Telephone
The telephone , colloquially referred to as a phone, is a telecommunications device that transmits and receives sounds, usually the human voice. Telephones are a point-to-point communication system whose most basic function is to allow two people separated by large distances to talk to each other...
tapping was conducted by the General Directorate for Technical Operations of the Securitate
Securitate
The Securitate was the secret police agency of Communist Romania. Previously, the Romanian secret police was called Siguranţa Statului. Founded on August 30, 1948, with help from the Soviet NKVD, the Securitate was abolished in December 1989, shortly after President Nicolae Ceaușescu was...
. Created with Soviet
Soviet Union
The Soviet Union , officially the Union of Soviet Socialist Republics , was a constitutionally socialist state that existed in Eurasia between 1922 and 1991....
assistance in 1954, the outfit monitored all voice and electronic communication
Communication
Communication is the activity of conveying meaningful information. Communication requires a sender, a message, and an intended recipient, although the receiver need not be present or aware of the sender's intent to communicate at the time of communication; thus communication can occur across vast...
s in and out of Romania. They bugged
Covert listening device
A covert listening device, more commonly known as a bug or a wire, is usually a combination of a miniature radio transmitter with a microphone. The use of bugs, called bugging, is a common technique in surveillance, espionage and in police investigations.A bug does not have to be a device...
telephones and intercepted all telegraphs and telex
Teleprinter
A teleprinter is a electromechanical typewriter that can be used to communicate typed messages from point to point and point to multipoint over a variety of communication channels that range from a simple electrical connection, such as a pair of wires, to the use of radio and microwave as the...
messages, as well as placing microphone
Microphone
A microphone is an acoustic-to-electric transducer or sensor that converts sound into an electrical signal. In 1877, Emile Berliner invented the first microphone used as a telephone voice transmitter...
s in both public and private buildings.