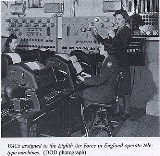 Overview
A teleprinter is a electromechanical typewriter that can be used to communicate typed messages from point to point and point to multipoint over a variety of communication channels that range from a simple electrical connection, such as a pair of wires, to the use of radio
Radio
Radio is the transmission of signals through free space by modulation of electromagnetic waves with frequencies below those of visible light. Electromagnetic radiation travels by means of oscillating electromagnetic fields that pass through the air and the vacuum of space...
and microwave
Microwave
Microwaves, a subset of radio waves, have wavelengths ranging from as long as one meter to as short as one millimeter, or equivalently, with frequencies between 300 MHz and 300 GHz. This broad definition includes both UHF and EHF , and various sources use different boundaries...
as the transmission medium
Transmission medium
A transmission medium is a material substance that can propagate energy waves...
. They could also serve as a command line interface to early mainframe computer
Mainframe computer
Mainframes are powerful computers used primarily by corporate and governmental organizations for critical applications, bulk data processing such as census, industry and consumer statistics, enterprise resource planning, and financial transaction processing.The term originally referred to the...
s and minicomputer
Minicomputer
A minicomputer is a class of multi-user computers that lies in the middle range of the computing spectrum, in between the largest multi-user systems and the smallest single-user systems...
s, sending typed data to the computer with or without printed output, and printing the response from the computer.

Teleprinters are now largely obsolete, though they are still widely used in the aviation industry (AFTN and airline teletype system), and variations called Telecommunications Devices for the Deaf (TDDs) are still used by the hearing impaired for typed communications over ordinary telephone lines.