Encyclopedia
Telavi is the main city and administrative center of Georgia
Georgia (country)
Georgia is a sovereign state in the Caucasus region of Eurasia. Located at the crossroads of Western Asia and Eastern Europe, it is bounded to the west by the Black Sea, to the north by Russia, to the southwest by Turkey, to the south by Armenia, and to the southeast by Azerbaijan. The capital of...
's eastern province of Kakheti
Kakheti
Kakheti is a historical province in Eastern Georgia inhabited by Kakhetians who speak a local dialect of Georgian. It is bordered by the small mountainous province of Tusheti and the Greater Caucasus mountain range to the north, Russian Federation to the Northeast, Azerbaijan to the Southeast, and...
. Its population consists of some 21,800 inhabitants (as of the year 2002). The city is located on foot-hills of Tsiv-Gombori Range
Tsiv-Gombori Range
The Tsiv-Gombori or Gombori is a mountain range in the Georgian section of Greater Caucasus mountains. It is located in the province of Kakheti, eastern Georgia, and stretches to the distance of 107 km, with the highest mountain being at 1.991 m above sea level.The Gombori range serves as a...
at 500-800 meters above the sea level.

First archaeological findings from Telavi date back to Bronze Age
Bronze Age
The Bronze Age is a period characterized by the use of copper and its alloy bronze as the chief hard materials in the manufacture of some implements and weapons. Chronologically, it stands between the Stone Age and Iron Age...
. One of the earliest surviving accounts of Telavi is from the 2nd century AD, by Greek
Ancient Greece
Ancient Greece is a civilization belonging to a period of Greek history that lasted from the Archaic period of the 8th to 6th centuries BC to the end of antiquity. Immediately following this period was the beginning of the Early Middle Ages and the Byzantine era. Included in Ancient Greece is the...
geographer
Geographer
A geographer is a scholar whose area of study is geography, the study of Earth's natural environment and human society.Although geographers are historically known as people who make maps, map making is actually the field of study of cartography, a subset of geography...
Claudius Ptolemaeus, who mentions the name Teleda (a reference to Telavi). Telavi began to transform into a fairly important and large political and administrative center in the 8th century AD. Interesting information on Telavi is provided in the records by an Arab geographer Al-Muqaddasi
Al-Muqaddasi
Muhammad ibn Ahmad Shams al-Din Al-Muqaddasi , also transliterated as Al-Maqdisi and el-Mukaddasi, was a medieval Arab geographer, author of Ahsan at-Taqasim fi Ma`rifat il-Aqalim .-Biography:Al-Muqaddasi, "the Hierosolomite" was born in Jerusalem in 946 AD...
of the 10th century, who mentions Telavi along with such important cities of that time's Caucasus as Tbilisi
Tbilisi
Tbilisi is the capital and the largest city of Georgia, lying on the banks of the Mt'k'vari River. The name is derived from an early Georgian form T'pilisi and it was officially known as Tiflis until 1936...
, Shamkhor, Ganja, Shemakha and Shirvan. Speaking about the population of Telavi, Al-Muqaddasi points out that for the most part is consisted of Christians
Georgian Orthodox and Apostolic Church
The Georgian Apostolic Autocephalous Orthodox Church is an autocephalous part of the Eastern Orthodox Church. Since the 4th century AD, Georgian Orthodoxy has been the state religion of Georgia, and it remains the country's largest religious institution....
. 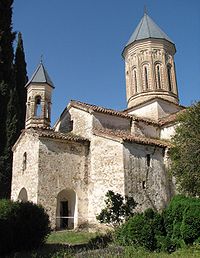 From the 10th until the 12th century (AD), Telavi served as the capital of the Kingdom of Kakheti
Kingdom of Kakheti
The Kingdom of Kakheti was a late medieval/early modern monarchy in eastern Georgia, centered at the province of Kakheti, with its capital first at Gremi and then at Telavi...
and later Kingdom of Kahet-Hereti. During the so called Golden Era of the Georgian State (12-13th centuries), Telavi turned into one of the most important political and economic centers of the Georgian State
Kingdom of Georgia
The Kingdom of Georgia was a medieval monarchy established in AD 978 by Bagrat III.It flourished during the 11th and 12th centuries, the so-called "golden age" of the history of Georgia. It fell to the Mongol invasions of the 13th century, but managed to re-assert sovereignty by 1327...
. After the disintegration of the united Georgian Kingdom in the 15th century, the role of Telavi started to decline and the city eventually became an ordinary town of trade and crafts. Telavi re-gained its political importance in the 17th century when it became a capital of kingdom of Kakheti
Kakheti
Kakheti is a historical province in Eastern Georgia inhabited by Kakhetians who speak a local dialect of Georgian. It is bordered by the small mountainous province of Tusheti and the Greater Caucasus mountain range to the north, Russian Federation to the Northeast, Azerbaijan to the Southeast, and...
. By 1762, it turned into the second capital (after Tbilisi) of the united Eastern Georgia
Eastern Georgia
Eastern Georgia commonly refers to the eastern part of the nation of Georgia, which in historic times included the kingdom of Iberia in the Caucasus. The present-day term refers to the territory of Georgia which lies to the east and south of the Likhi and Meskheti Ranges, but excludes the region...
n Kingdom of Kartl-Kakheti
Kartl-Kakheti
The Kingdom of Kartli-Kakheti was created in 1762 by the unification of two eastern Georgian kingdoms, which had existed independently since the disintegration of the united Georgian Kingdom in the 15th century....
. The reign of King Erekle II
Erekle II
Erekle II was a Georgian monarch of the Bagrationi Dynasty, reigning as the king of Kakheti from 1744 to 1762, and of Kartli and Kakheti from 1762 until 1798. In the contemporary Persian sources he is referred to as Erekli Khan, while Russians knew him as Irakli...
, who was born and died in this city, was a special epoch in the history of Telavi. During this period (1744-1798) it grew into a strategic and cultural centre. Erakle II established there theological seminary
Seminary
A seminary, theological college, or divinity school is an institution of secondary or post-secondary education for educating students in theology, generally to prepare them for ordination as clergy or for other ministry...
and founded a theatre. Erekle II's reforms touched upon all the aspects of life in the country. They changed fundamentally the political, economical and cultural orientation of Kartli-Kakheti and, subsequently of the whole Georgia. His name became a symbol of freedom and national independence of the Georgian people. Erakle II is still called affectionately “Patara Kakhi” (Little Kakhetian), and his heroic deeds are described in the folk literature. 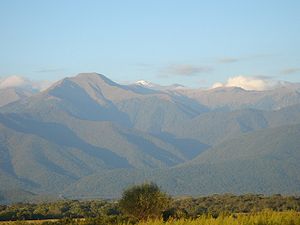 In 1801, after the Kingdom of Kartli-Kakheti was annexed by the Russian Empire
Russian Empire
The Russian Empire was a state that existed from 1721 until the Russian Revolution of 1917. It was the successor to the Tsardom of Russia and the predecessor of the Soviet Union...
, Telavi lost its status as a capital. In the 19th century, the city was given the status of an administrative center of an uyezd
Uyezd
Uyezd or uezd was an administrative subdivision of Rus', Muscovy, Russian Empire, and the early Russian SFSR which was in use from the 13th century. Uyezds for most of the history in Russia were a secondary-level of administrative division...
within the Tbilisi Gubernyia. During that period, the economy of the city was mainly composed of small-scale industries
Light industry
Light industry is usually less capital intensive than heavy industry, and is more consumer-oriented than business-oriented...
(leather painting, pottery production, wine-making, etc.), commerce and agriculture. The town's population was about 12,000 in the end of the 19th century (including about 2,000 Armenians
Armenians
Armenian people or Armenians are a nation and ethnic group native to the Armenian Highland.The largest concentration is in Armenia having a nearly-homogeneous population with 97.9% or 3,145,354 being ethnic Armenian....
, chiefly refuges from Ottoman Armenia, and 10,000 ethnic Georgians
Georgians
The Georgians are an ethnic group that have originated in Georgia, where they constitute a majority of the population. Large Georgian communities are also present throughout Russia, European Union, United States, and South America....
).

Telavi and its surroundings are rich by historical, architectural and natural monuments. The most important heritage monuments preserved within the city limits include:


Telavi is the only city in Georgia, where four fortification monuments from different historical periods remain relatively intact. Due to this reason, architects, scholars and art historians consider Telavi as the most "medieval" cities in the country. Another curious sight in Telavi is a 900-year-old sycamore
Sycamore
Sycamore is a name which is applied at various times and places to three very different types of trees, but with somewhat similar leaf forms....
(45 meters high, 12.4 meters around the trunk). Other notable landmarks around Telavi include the Alaverdi Cathedral (11th century AD) - the second highest cathedral in Georgia after the newly built Tbilisi Sameba Cathedral
Tbilisi Sameba Cathedral
The Holy Trinity Cathedral of Tbilisi commonly known as Sameba is the main Cathedral of the Georgian Orthodox Church located in Tbilisi, the capital of Georgia. Constructed between 1995 and 2004, it is the third-tallest Eastern Orthodox Cathedral in the World...
, the Ikalto Academy
Ikalto
Ikalto is a village about 10 km west of the town Telavi in the Kakheti region of Eastern Georgia. It is mostly known for its monastery complex and the Ikalto Academy....
(8-12th centuries AD) - where the famous Georgian writer Shota Rustaveli
Shota Rustaveli
Shota Rustaveli was a Georgian poet of the 12th century, and one of the greatest contributors to Georgian literature. He is author of "The Knight in the Panther's Skin" , the Georgian national epic poem....
studied, the Church of St. George (dedicated to the patron saint of Georgia; it is said that in Georgia there are 365 churches in the name of St. George), ruins of the city and castle of Gremi
Gremi
Gremi is a 16th-century architectural monument – the royal citadel and the Church of the Archangels – in Kakheti, Georgia. The complex is what has survived from the once flourishing town of Gremi and is located east of the present-day village of the same name in the Kvareli district, 175...
(the former capital of Kakheti from the 15-17th centuries AD), Shuamta - a complex made up of three churches of different periods - 6th, 7th and 8th centuries in a highland forest, Akhali Shuamta ("New Shuamta" in English) - the monastery close to Dzveli Shuamta ("Old Shuamta" in English), built in the 16th century, the stunning Tsinandali Gardens (the residential Palace of Noblemen Chavchavadzes family) and many others.

At present, the city of Telavi is connected with Tbilisi by two highways. The most widely traveled (and better-paved) highway runs through the rural areas of Kakheti and is longer (the overall length of the highway is approximately 156 km) than the route, which runs through the highlands of the Gombori Mountain Range. The shorter route (approximately 96 km) is quite scenic, but is less used due to the reconstruction works that are being carried out there.

Because of its beauty, historical monuments and most importantly, the hospitality and the reputation for kindness of its residents, the city is a popular tourist destination in Georgia.

Telavi serves as the hometown of the Georgian bush pilot
Bush flying
Bush flying is a term for aircraft operations carried out in remote, inhospitable regions of the world. Bush flying involves operations in rough terrain where there are often no prepared landing strips or runways, frequently necessitating that bush planes be equipped with abnormally large tires,...
Mimino (Vakhtang Kikabidze
Vakhtang Kikabidze
Vakhtang "Buba" Kikabidze is a Georgian and Soviet singer, actor, screenwriter, producer, and composer. He performed in a number of films, among them the main role of a helicopter pilot in the iconic Soviet film Mimino....
) in the 1977 Soviet comedy Mimino
Mimino
Mimino , is a 1977 comedy film by Soviet Georgian director Georgi Daneliya produced by Mosfilm and Gruziya-film, starring Vakhtang Kikabidze and Frunzik Mkrtchyan. Anatoliy Petritskiy served as the film's Director of Photography. The Soviet era comedy won the 1977 Golden Prize at the Moscow...
.