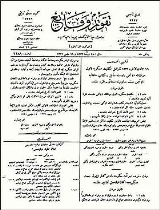 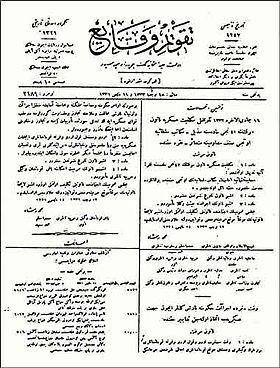 The Tehcir Law was passed by the Ottoman Parliament on May 27, 1915 and allegedly came into force on June 1, 1915, with publication in Takvim-i Vekayi, the official gazette of the Ottoman State. The temporary law expired on February 8, 1916.

After the expiration of the "Tehcir Law" evacuation and massacres still followed. On 13 September 1915, the Ottoman parliament passed the "Temporary Law of Expropriation and Confiscation," stating that all property, including land, livestock, and homes belonging to Armenians, was to be confiscated by the authorities.


The background of the legislation

Before the Ottoman parliament implemented the "Tehcir Law", there was a circular by Talaat Pasha. In the night of April 24, 1915, Mehmed Talaat Bey, who was the minister of interior at the time, ordered 250 Armenian intellectuals to be deported from the Ottoman capital
Armenian notables deported from the Ottoman capital in 1915
The deportation of Armenian notables, also known as the Red Sunday refers to the night when leaders of the Armenian community of the Ottoman capital, Constantinople, and later other centers were arrested and moved to two holding centers near Ankara by the Minister of the Interior Mehmed Talaat Bey...
.

In May 1915, Mehmed Talaat requested that the cabinet
Cabinet (government)
A Cabinet is a body of high ranking government officials, typically representing the executive branch. It can also sometimes be referred to as the Council of Ministers, an Executive Council, or an Executive Committee.- Overview :...
and Grand Vizier
Grand Vizier
Grand Vizier, in Turkish Vezir-i Azam or Sadr-ı Azam , deriving from the Arabic word vizier , was the greatest minister of the Sultan, with absolute power of attorney and, in principle, dismissable only by the Sultan himself...
Said Halim Pasha
Said Halim Pasha
Said Halim Pasha , Ottoman Empire Grand Vizier from 1913-17. Born in Cairo, Egypt, he was the grandson of Muhammad Ali of Egypt, "founder of modern Egypt". The "Pasha" in his name is an honorific that translates in English to "Lord", or "Lord Said Halim".He was one of the signers in Ottoman-German...
legalize a measure for relocation and settlement of Armenians to other places due to what Talat called "the Armenian riots and massacres, which had arisen in a number of places in the country" are a threat to national security."


The nature of the law

Tehcir Law was a temporary law that expired on February 8, 1916. It was a civil law
Civil law (legal system)
Civil law is a legal system inspired by Roman law and whose primary feature is that laws are codified into collections, as compared to common law systems that gives great precedential weight to common law on the principle that it is unfair to treat similar facts differently on different...
, planned, implemented and enforced with an office (created by the law) to coordinate the activities under the name of “Migrant General Directorate” (Turkish: Göçmen Genel Müdürlüğü). The civil law gave the military an enforcing power only if there were opposing parties to the implementation. The rules and regulations of the law, as published in the Takvim-i Vekayi (Ottoman official newspaper), were public and they were shared with all parties.


The question of the law

Tehcir Law publicly was allegedly about (1) the military measures against those opposing government orders, country’s defense, and the protection of peace; and against those organizing armed attacks and resistance, and killing rebels during aggression and uprising in wartime, (2) the transfer and resettlement on a single basis or en masse, the people living in villages and towns who are found to be engaged in espionage or treason, (3) the temporary law’s effect and expiration, and (4) the definition of the responsible parties (application). One Ottoman Archival material dated July 12 suggest that massacres were part of those measures implemented against the Armenians. The Turkish Martial Court supports this by referring to documents that claim that the main reason for the evacuation was annihilation.


The subject of the law

Although this law was directed against one particular ethnic group (Armenian) the Assyrian population also fell victim as did some Christians from the East.

In the text of the law, there is no explicit mention that Armenians were the main target, and the text notes that (1) the ill, (2) the blind, (3) Catholics, (4) Protestants, (5) the soldiers and their families, (6) the officers, (7) merchants, some workers and masters were not subject to evacuation. If conditions got worse, these groups are ordered to be settled in the city centers.


Rights of subject of the law

The alleged intention of the law, which was published during World War I
World War I
World War I , which was predominantly called the World War or the Great War from its occurrence until 1939, and the First World War or World War I thereafter, was a major war centred in Europe that began on 28 July 1914 and lasted until 11 November 1918...
, was a temporary movement of the citizens during the conflicts and not the permanent displacement as there was a decree (regulation, or adjunct) with respect to the relocated citizens by the "Tehcir Law" who wanted to return; claimed "except those people [affected by the Tehcir Law], no one else will be touched." Also if we look at the fourth section of the Tehcir law, it was specifically designed to hold the enforcer units responsible to follow up and record the properties owned by the subjects of the immigration. The law included a responsible party for the protection of properties the owners could/will return in a later term. Another law was passed to regulate the enforcement of this section On 10 June 1915. In this section, it was demanded that there would be three copies of this information; one kept in the regional churches, one in the regional administration, and one kept by the commission responsible for the execution of the law. The second and third parties of this law were held responsible for the protection of the properties until the immigrants' return.

While on the surface the law was allegedly temporary, the main reason of the law was to settle the Armenian issue once for all, therefore permanent. Kamuran Gurun has released archival material from the minister of war that provides the aim of passing the law. In that letter Enver takes it as permanent and not temporary with the aim of fixing the Armenian problem once and for all.

While it is claimed that the debts of the evacuated population were to be completely canceled, and recurring tax debts (property tax) of the Armenians were postponed until they returned, the Armenian properties were seized by the government, sold or given to the Muslim residents or given to Muslim immigrants. A significant amount of money made from the sale of the seized properties was transferred and secured in Berlin.


The financial burden of the law

A fund was initiated with the law. The control of the fund was assigned to director Şükrü Bey, a directorate under the immigrants general office (Immigrant and Tribe Settling). He was accused of complicity during the Martial court in the destruction of the Armenian population. Also considered to maintain the link between the Ittihadists and the special organization. From the documents:

Also, the Ottoman government under the international agreements assigned within the capitulations, enabled fund transfers using the missionaries and consuls. Armenian immigrants from the United States sent funds, which were distributed to the Armenians under the knowledge of the government by these institutions. The American Near East Relief Committee, a relief organization for refugees in the Middle East, helped donate over $102 million to Armenians both during and after the war.

It has to be noted that the funds within the provinces aided the immigrants, whose money allocations were sent under provincial budgets depending on the condition of needs.

Those are contradicted by the Ottoman barring access to its own allies relief to the starving Armenian population.


The application of the law

The law was a selective law as explained under "The subject of the law". The list covers the citizens of the Ottoman Empire that were affected by the law.

Abolishment of the law

The law was abolished on February 21, 1916, with an order sent to all Ottoman provinces, while the destruction of the Armenian population continued also claimed political detainees continued to be displaced to Der Zor province
Deir ez-Zor Vilayet
The Sanjak of Zor was a sanjak of the Ottoman Empire. It was spun off from the Vilayet of Baghdad in 1857.The capital was Deir Ez-Zor, a town on the right bank of the Euphrates, which was also the only considerable town of the sanjak. At the beginning of the 20th century, the sanjak had an area of...
. All the activities finalized on March 15, 1916.
The source of this article is wikipedia, the free encyclopedia.  The text of this article is licensed under the GFDL.