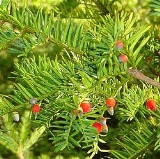 Encyclopedia
The family Taxaceae, commonly called the yew family, includes three genera and about 7 to 12 species of coniferous plant
Plant
Plants are living organisms belonging to the kingdom Plantae. Precise definitions of the kingdom vary, but as the term is used here, plants include familiar organisms such as trees, flowers, herbs, bushes, grasses, vines, ferns, mosses, and green algae. The group is also called green plants or...
s, or in other interpretations (see Classification, below), six genera and about 30 species.

They are many-branched, small tree
Tree
A tree is a perennial woody plant. It is most often defined as a woody plant that has many secondary branches supported clear of the ground on a single main stem or trunk with clear apical dominance. A minimum height specification at maturity is cited by some authors, varying from 3 m to...
s and shrub
Shrub
A shrub or bush is distinguished from a tree by its multiple stems and shorter height, usually under 5–6 m tall. A large number of plants may become either shrubs or trees, depending on the growing conditions they experience...
s. The leaves are evergreen
Evergreen
In botany, an evergreen plant is a plant that has leaves in all seasons. This contrasts with deciduous plants, which completely lose their foliage during the winter or dry season.There are many different kinds of evergreen plants, both trees and shrubs...
, spirally arranged, often twisted at the base to appear 2-ranked. They are linear to lanceolate, and have pale green or white stomatal bands on the undersides. The plants are dioecious
Plant sexuality
Plant sexuality covers the wide variety of sexual reproduction systems found across the plant kingdom. This article describes morphological aspects of sexual reproduction of plants....
, rarely monoecious
Plant sexuality
Plant sexuality covers the wide variety of sexual reproduction systems found across the plant kingdom. This article describes morphological aspects of sexual reproduction of plants....
. The male cones
Conifer cone
A cone is an organ on plants in the division Pinophyta that contains the reproductive structures. The familiar woody cone is the female cone, which produces seeds. The male cones, which produce pollen, are usually herbaceous and much less conspicuous even at full maturity...
are 2-5 mm long, and shed pollen
Pollen
Pollen is a fine to coarse powder containing the microgametophytes of seed plants, which produce the male gametes . Pollen grains have a hard coat that protects the sperm cells during the process of their movement from the stamens to the pistil of flowering plants or from the male cone to the...
in the early spring. The female cones are highly reduced, with just one ovuliferous scale and one seed. As the seed matures, the ovuliferous scale develops into a fleshy aril
Aril
An aril is any specialized outgrowth from the funiculus that covers or is attached to the seed. It is sometimes applied to any appendage or thickening of the seed coat in flowering plants, such as the edible parts of the mangosteen and pomegranate fruit, the mace of the nutmeg seed, or the...
partly enclosing the seed. The mature aril is brightly coloured, soft, juicy and sweet, and is eaten by bird
Bird
Birds are feathered, winged, bipedal, endothermic , egg-laying, vertebrate animals. Around 10,000 living species and 188 families makes them the most speciose class of tetrapod vertebrates. They inhabit ecosystems across the globe, from the Arctic to the Antarctic. Extant birds range in size from...
s which then disperse the hard seed undamaged in their droppings. However, the seeds are deadly poisonous to humans, containing the poisons Taxine and Taxol. 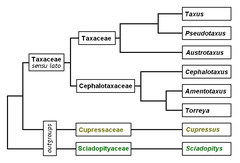 The Taxaceae is now generally included with all other conifers in the order Pinales
Pinales
The Order Pinales in the Division Pinophyta, Class Pinopsida comprises all the extant conifers. This order was formerly known as the Coniferales....
, as DNA
DNA
Deoxyribonucleic acid is a nucleic acid that contains the genetic instructions used in the development and functioning of all known living organisms . The DNA segments that carry this genetic information are called genes, but other DNA sequences have structural purposes, or are involved in...
analysis has shown that the yews are monophyletic with the other families in the Pinales (Chase et al., 1993; Price, 2003), a conclusion supported by micromorphology studies (Anderson & Owens, 2003). Formerly they were often treated as distinct from other conifers by placing them in a separate order Taxales
Taxales
The plant order Taxales was until recently treated as a distinct order in the division Pinophyta, class Pinopsida, and included only those species in the family Taxaceae, known commonly as yews. Under this interpretation, all other conifers were classified separately in the order Pinales...
.

The genera Torreya and Amentotaxus, previously included in this family, are better transferred to the Cephalotaxaceae
Cephalotaxaceae
The family Cephalotaxaceae is a small grouping of conifers, with three genera and about 20 species, closely allied to the Taxaceae, and included in that family by some botanists. They are restricted to east Asia, except for two species of Torreya found in the southwest and southeast of the USA;...
, as genetic tests show they are more closely related to Cephalotaxus than to Taxus. Alternatively, they may be included, with Cephalotaxus, in a broader interpretation of Taxaceae as a single larger family (Price, 2003). In this sense, the Taxaceae includes six genera and about 30 species.

The differences between the Taxaceae and the Cephalotaxaceae are as follows:

A few botanists have transferred Austrotaxus to its own family, the Austrotaxaceae, suggesting it may be closer to the Podocarpaceae
Podocarpaceae
Podocarpaceae is a large family of mainly Southern Hemisphere conifers, comprising about 156 species of evergreen trees and shrubs. It contains 19 genera if Phyllocladus is included and if Manoao and Sundacarpus are recognized....
than to the other Taxaceae, but genetic evidence does not support this transfer.