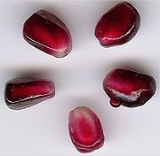 Distinguish from aryl
Aryl
In the context of organic molecules, aryl refers to any functional group or substituent derived from an aromatic ring, be it phenyl, naphthyl, thienyl, indolyl, etc....
, which is a type of organic chemical radical. 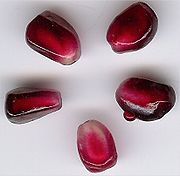 An aril (or arillus) is any specialized outgrowth from the funiculus
Ovule
Ovule means "small egg". In seed plants, the ovule is the structure that gives rise to and contains the female reproductive cells. It consists of three parts: The integument forming its outer layer, the nucellus , and the megaspore-derived female gametophyte in its center...
(attachment point of the seed) (or hilum
Hilum (biology)
In botany, the hilum is a scar or mark left on a seed coat by the former attachment to the ovary wall or to the funiculus...
) that covers or is attached to the seed. It is sometimes applied to any appendage or thickening of the seed coat in flowering plants, such as the edible parts of the mangosteen
Mangosteen
The purple mangosteen , colloquially known simply as mangosteen, is a tropical evergreen tree believed to have originated in the Sunda Islands and the Moluccas of Indonesia. The tree grows from 7 to 25 m tall...
and pomegranate
Pomegranate
The pomegranate , Punica granatum, is a fruit-bearing deciduous shrub or small tree growing between five and eight meters tall.Native to the area of modern day Iran, the pomegranate has been cultivated in the Caucasus since ancient times. From there it spread to Asian areas such as the Caucasus as...
fruit, the mace of the nutmeg seed, or the hairs of a cotton plant. The aril is an edible enticement, encouraging transport by animals and thereby assisting in seed dispersal. Pseudarils are aril-like structures commonly found on the pyrenes
Pyrena
Pyrena or pyrene is the name for a nutlet resembling a seed, or the kernel of a drupe or drupelet....
of Burseraceae
Burseraceae
Burseraceae is a moderate-sized family of 17-18 genera and about 540 species of flowering plants. The actual numbers differ according to the time period in which a given source is written describing this family. The Burseraceae is also known as the Torchwood family, the frankincense and myrrh...
species - the fleshy, edible pericarp splits neatly in two halves, then falling away or being eaten to reveal a brightly-coloured pseudaril around the black seed.

The aril may create a fruit
Fruit
In broad terms, a fruit is a structure of a plant that contains its seeds.The term has different meanings dependent on context. In non-technical usage, such as food preparation, fruit normally means the fleshy seed-associated structures of certain plants that are sweet and edible in the raw state,...
-like structure (called a false-fruit). False fruit are found in numerous Angiosperm taxa. The edible flesh of the longan
Longan
Dimocarpus longan, commonly known as the longan, is a tropical tree native to South and Southeast Asia, in the Indomalaya ecozone known for its edible fruit.-Vernacular names:The fruit is known as longan or longyan in English...
, lychee
Lychee
The lychee is the sole member of the genus Litchi in the soapberry family, Sapindaceae. It is a tropical and subtropical fruit tree native to Southern China and Southeast Asia, and now cultivated in many parts of the world...
, ackee
Ackee
The ackee, also known as the vegetable brain, achee, akee apple or akee is a member of the Sapindaceae , native to tropical West Africa in Cameroon, Gabon, São Tomé and Príncipe, Benin, Burkina Faso, Côte d'Ivoire, Ghana, Guinea, Guinea-Bissau, Mali, Nigeria, Senegal, Sierra Leone and Togo.It is...
and lleuque
Prumnopitys andina
Prumnopitys andina , the Chilean plum yew, is an evergreen coniferous tree native to south-central Chile and a few areas in adjacent parts of westernmost Argentina from 36 to 40° South latitude...
fruits are highly developed arils surrounding the seed rather than a pericarp layer. Such arils are also found in a few species of gymnosperm
Gymnosperm
The gymnosperms are a group of seed-bearing plants that includes conifers, cycads, Ginkgo, and Gnetales. The term "gymnosperm" comes from the Greek word gymnospermos , meaning "naked seeds", after the unenclosed condition of their seeds...
s, notably the yews
Taxus
Taxus is a genus of yews, small coniferous trees or shrubs in the yew family Taxaceae. They are relatively slow-growing and can be very long-lived, and reach heights of 1-40 m, with trunk diameters of up to 4 m...
and related conifers
Pinophyta
The conifers, division Pinophyta, also known as division Coniferophyta or Coniferae, are one of 13 or 14 division level taxa within the Kingdom Plantae. Pinophytes are gymnosperms. They are cone-bearing seed plants with vascular tissue; all extant conifers are woody plants, the great majority being...
. Instead of the wood
Wood
Wood is a hard, fibrous tissue found in many trees. It has been used for hundreds of thousands of years for both fuel and as a construction material. It is an organic material, a natural composite of cellulose fibers embedded in a matrix of lignin which resists compression...
y cone
Conifer cone
A cone is an organ on plants in the division Pinophyta that contains the reproductive structures. The familiar woody cone is the female cone, which produces seeds. The male cones, which produce pollen, are usually herbaceous and much less conspicuous even at full maturity...
typical of most gymnosperms, the reproductive structure of the yew consists of a single seed that becomes surrounded by a fleshy, cup-like covering. This covering is derived from a highly modified cone scale.

In the photographs of a European yew (Taxus baccata
Taxus baccata
Taxus baccata is a conifer native to western, central and southern Europe, northwest Africa, northern Iran and southwest Asia. It is the tree originally known as yew, though with other related trees becoming known, it may be now known as the English yew, or European yew.-Description:It is a small-...
) below, the aril starts out as a small, green band at the base of the seed, then turns brown to red as it enlarges and surrounds the seed, eventually becoming fleshy and scarlet in color at maturity. The aril is attractive to fruit-eating bird
Bird
Birds are feathered, winged, bipedal, endothermic , egg-laying, vertebrate animals. Around 10,000 living species and 188 families makes them the most speciose class of tetrapod vertebrates. They inhabit ecosystems across the globe, from the Arctic to the Antarctic. Extant birds range in size from...
s and is non-toxic (all other parts of the yew are toxic), serving therefore to promote dispersal of the yew seed by birds, which digest the fleshy aril as a food source, and pass the seed out in their droppings. 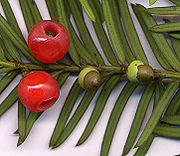