Encyclopedia
The Tawny Frogmouth is an Australia
Australia
Australia , officially the Commonwealth of Australia, is a country in the Southern Hemisphere comprising the mainland of the Australian continent, the island of Tasmania, and numerous smaller islands in the Indian and Pacific Oceans. It is the world's sixth-largest country by total area...
n species of frogmouth
Frogmouth
The frogmouths are a group of nocturnal birds related to the nightjars. They are found from India across southern Asia to Australia.They are named for their large flattened hooked bills and huge frog-like gape, which they use to capture insects. Their flight is weak.They rest horizontally on...
, a type of bird found throughout the Australian mainland, Tasmania
Tasmania
Tasmania is an Australian island and state. It is south of the continent, separated by Bass Strait. The state includes the island of Tasmania—the 26th largest island in the world—and the surrounding islands. The state has a population of 507,626 , of whom almost half reside in the greater Hobart...
and southern New Guinea
New Guinea
New Guinea is the world's second largest island, after Greenland, covering a land area of 786,000 km2. Located in the southwest Pacific Ocean, it lies geographically to the east of the Malay Archipelago, with which it is sometimes included as part of a greater Indo-Australian Archipelago...
. The Tawny Frogmouth is often mistaken to be an owl
Owl
Owls are a group of birds that belong to the order Strigiformes, constituting 200 bird of prey species. Most are solitary and nocturnal, with some exceptions . Owls hunt mostly small mammals, insects, and other birds, although a few species specialize in hunting fish...
. Many Australians refer to the Tawny Frogmouth by the colloquial names of "Mopoke" or "Morepork", which usually are common alternative names for the Southern Boobook
Southern Boobook
The Southern Boobook , also called the Mopoke, Morepork, Ruru or Tasmanian Spotted Owl, is a small brown owl found throughout New Zealand, Tasmania, across most of mainland Australia and in Timor, southern New Guinea and nearby islands.The bird has almost 20 alternative common names, most of which...
. Frogmouths are not raptorial
Raptorial
The term raptorial implies much the same as "predatory", but most often refers to modifications of an arthropod's foreleg that make it function for the grasping of prey while it is consumed, where the gripping surfaces are formed from the opposing faces of two successive leg segments...
birds.

The Tawny Frogmouth was first described in 1801 by English naturalist John Latham
John Latham (ornithologist)
John Latham was an English physician, naturalist and author. He was born at Eltham in Kent, and was the eldest son of John Latham, a surgeon there, and his mother was a descendant of the Sothebys, in Yorkshire....
. Its specific name is derived from the Latin
Latin
Latin is an Italic language originally spoken in Latium and Ancient Rome. It, along with most European languages, is a descendant of the ancient Proto-Indo-European language. Although it is considered a dead language, a number of scholars and members of the Christian clergy speak it fluently, and...
stems "stix" "owl" (Latin: strix) and "-oides" "form" (Latin −oides). It belongs to the frogmouth family Podargidae, which also includes the other types of frogmouths like the Javan
Javan Frogmouth
The Javan Frogmouth is a species of bird in the Podargidae family. The species is sometimes known as Horsfield's Frogmouth.It is found in Brunei, Indonesia, Malaysia, Myanmar, the Philippines, and Thailand....
and Solomons Frogmouths. Tawny Frogmouths came from Aves (modern birds) then the neoaves, which has such birds like flamingo
Flamingo
Flamingos or flamingoes are gregarious wading birds in the genus Phoenicopterus , the only genus in the family Phoenicopteridae...
s, cuckoo
Cuckoo
The cuckoos are a family, Cuculidae, of near passerine birds. The order Cuculiformes, in addition to the cuckoos, also includes the turacos . Some zoologists and taxonomists have also included the unique Hoatzin in the Cuculiformes, but its taxonomy remains in dispute...
s and the owl
Owl
Owls are a group of birds that belong to the order Strigiformes, constituting 200 bird of prey species. Most are solitary and nocturnal, with some exceptions . Owls hunt mostly small mammals, insects, and other birds, although a few species specialize in hunting fish...
s, that continued on to Caprimulgiformes
Caprimulgiformes
The Caprimulgiformes is an order of birds that includes a number of birds with global distribution . They are generally insectivorous and nocturnal...
, this is the group that includes the nightjars and oilbirds and then onto Podargidae. Podargidae have been around for about 56 million years, since the Eocene
Eocene
The Eocene Epoch, lasting from about 56 to 34 million years ago , is a major division of the geologic timescale and the second epoch of the Paleogene Period in the Cenozoic Era. The Eocene spans the time from the end of the Palaeocene Epoch to the beginning of the Oligocene Epoch. The start of the...
period.

Although related to owls, frogmouths are more closely related to nightjar
Nightjar
Nightjars are medium-sized nocturnal or crepuscular birds with long wings, short legs and very short bills. They are sometimes referred to as goatsuckers from the mistaken belief that they suck milk from goats . Some New World species are named as nighthawks...
s and oilbird
Oilbird
The Oilbird , also known as Guácharo, is a bird found in the northern areas of South America . They are nocturnal feeders on the fruits of the Oil Palm and tropical laurels, and are the only nocturnal fruit eating birds in the world...
s. 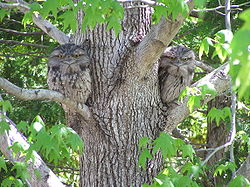 Males and females look alike and are 35–53 cm (14–21 in) long. This very bulky species can weigh up to 680 grams (1.5 lbs) and, in overweight zoo specimens, up to 1400 grams (3.1 lbs). This species thus reaches the highest weights known in the Caprimulgiformes
Caprimulgiformes
The Caprimulgiformes is an order of birds that includes a number of birds with global distribution . They are generally insectivorous and nocturnal...
order. They have yellow eyes and a wide beak topped with a tuft of bristly feathers. They make loud clacking sounds with their beaks and emit a reverberating booming call.

Tawny Frogmouths hunt at night and spend the day roosting on a dead log or tree branch close to the tree trunk. Their camouflage
Camouflage
Camouflage is a method of concealment that allows an otherwise visible animal, military vehicle, or other object to remain unnoticed, by blending with its environment. Examples include a leopard's spotted coat, the battledress of a modern soldier and a leaf-mimic butterfly...
is excellent — staying very still and upright, they look just like part of the branch.

The Tawny Frogmouth is almost exclusively insectivorous, feeding rarely on frogs and other small prey. They catch their prey with their beaks rather than with their talons, another way in which they are different from owls. Owls fly around at night hunting food, but Tawny Frogmouths generally remain sitting very still on a low perch, and wait for food to come to them. They catch prey with their beaks, and sometimes drop from their perch onto the prey on the ground. The bird's large eyes and excellent hearing aid nocturnal hunting.

Tawny Frogmouth pairs stay together until one of the pair dies. They breed from August to December. They usually use the same nest each year, and must make repairs to their loose, untidy platforms of sticks. After mating, the female lays two or three eggs onto a lining of green leaves in the nest. Both male and female take turns sitting on the eggs to incubate them until they hatch about 25 days later. Both parents help feed the chicks.

When feeling threatened, the Tawny Frogmouth stays perfectly still, with eyes almost shut and with bill pointed straight, relying on camouflage for protection.