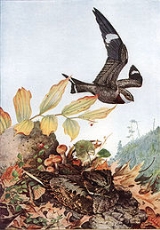 
Nightjars are medium-sized nocturnal or crepuscular
Crepuscular
Crepuscular animals are those that are active primarily during twilight, that is during dawn and dusk. The word is derived from the Latin word crepusculum, meaning "twilight." Crepuscular is, thus, in contrast with diurnal and nocturnal behavior. Crepuscular animals may also be active on a bright...
bird
Bird
Birds are feathered, winged, bipedal, endothermic , egg-laying, vertebrate animals. Around 10,000 living species and 188 families makes them the most speciose class of tetrapod vertebrates. They inhabit ecosystems across the globe, from the Arctic to the Antarctic. Extant birds range in size from...
s with long wings, short legs and very short bills. They are sometimes referred to as goatsuckers from the mistaken belief that they suck milk from goats (the Latin
Latin
Latin is an Italic language originally spoken in Latium and Ancient Rome. It, along with most European languages, is a descendant of the ancient Proto-Indo-European language. Although it is considered a dead language, a number of scholars and members of the Christian clergy speak it fluently, and...
for goatsucker is Caprimulgus). Some New World
New World
The New World is one of the names used for the Western Hemisphere, specifically America and sometimes Oceania . The term originated in the late 15th century, when America had been recently discovered by European explorers, expanding the geographical horizon of the people of the European middle...
species are named as nighthawks. Nightjars usually nest on the ground.

Nightjars are found around the world. They are mostly active in the late evening and early morning or at night, and feed predominantly on moths and other large flying insects.

Most have small feet, of little use for walking, and long pointed wings. Their soft plumage is cryptically coloured to resemble bark or leaves. Some species, unusual for birds, perch along a branch, rather than across it. This helps to conceal them during the day. Bracken
Bracken
Bracken are several species of large, coarse ferns of the genus Pteridium. Ferns are vascular plants that have alternating generations, large plants that produce spores and small plants that produce sex cells . Brackens are in the family Dennstaedtiaceae, which are noted for their large, highly...
is their preferred habitat.

The Common Poorwill
Common Poorwill
The Common Poorwill is a nocturnal bird of the family Caprimulgidae, the nightjars. It is found from British Columbia and southeastern Alberta, through the western United States to northern Mexico...
, Phalaenoptilus nuttallii is unique as a bird that undergoes a form of hibernation, becoming torpid and with a much reduced body temperature for weeks or months, although other nightjars can enter a state of torpor for shorter periods.

Nightjars lay one or two patterned eggs directly onto bare ground. It has been suggested that nightjars will move their eggs and chicks from the nesting site in the event of danger by carrying them in their mouths. This suggestion has been repeated many times in ornithology books, but while this may accidentally happen, surveys of nightjar research have found very little evidence to support this idea.

Working out conservation strategies for some species of nightjar presents a particular challenge common to other hard-to-see families of birds; in a few cases, humans do not have enough data on whether a bird is rare or not. This has nothing to do with any lack of effort. It reflects, rather, the difficulty in locating and identifying a small number of those species of birds among the 10,000 or so that exist in the world, given the limitations of human beings. A perfect example is the Vaurie's Nightjar in China
China
Chinese civilization may refer to:* China for more general discussion of the country.* Chinese culture* Greater China, the transnational community of ethnic Chinese.* History of China* Sinosphere, the area historically affected by Chinese culture...
's south-western Xinjiang
Xinjiang
Xinjiang is an autonomous region of the People's Republic of China. It is the largest Chinese administrative division and spans over 1.6 million km2...
. It has been seen for certain only once, in 1929, a specimen that was held in the hand. Surveys in the 1970s and 1990s failed to find it. It is perfectly possible that it has evolved as a species that can only really be identified in the wild by other Vaurie's Nightjars, rather than by humans. As a result, scientists do not know whether it is extinct, endangered, or even locally common.

Traditionally, nightjars have been divided into two subfamilies: the Caprimulginae, or typical nightjars with about 70 species, and the Chordeilinae, or nighthawk
Nighthawk
A nighthawk is a nocturnal bird of the subfamily Chordeilinae, within the nightjar family, Caprimulgidae. Nighthawks are medium-sized New World birds, with long wings, short legs, and very short bills. They usually nest on the ground. They feed on flying insects. The Least Nighthawk, at and ,...
s of the New World with about 9 species. The two groups are similar in most respects, but the typical nightjars have rictal bristles, longer bills, and softer plumage. In their pioneering DNA-DNA hybridisation
DNA-DNA hybridisation
DNA-DNA hybridization generally refers to a molecular biology technique that measures the degree of genetic similarity between pools of DNA sequences. It is usually used to determine the genetic distance between two species...
work, Sibley
Charles Sibley
Charles Gald Sibley was an American ornithologist and molecular biologist. He had an immense influence on the scientific classification of birds, and the work that Sibley initiated has substantially altered our understanding of the evolutionary history of modern birds.Sibley's taxonomy has been a...
and Ahlquist found that the genetic difference between the eared-nightjars and the typical nightjars was, in fact, greater than that between the typical nightjars and the nighthawks of the New World. Accordingly, they placed the eared-nightjars in a separate family
Family (biology)
In biological classification, family is* a taxonomic rank. Other well-known ranks are life, domain, kingdom, phylum, class, order, genus, and species, with family fitting between order and genus. As for the other well-known ranks, there is the option of an immediately lower rank, indicated by the...
: Eurostopodidae
Eurostopodidae
The Eared nightjars are a small family of nocturnal birds related to nightjars, although the taxonomy is uncertain. There are seven species, mainly found in forest and scrub from China to Australia. All are placed in one genus, Eurostopodus. They are long winged birds with plumage patterned with...
.

Subfamily Chordeilinae
Nighthawk
A nighthawk is a nocturnal bird of the subfamily Chordeilinae, within the nightjar family, Caprimulgidae. Nighthawks are medium-sized New World birds, with long wings, short legs, and very short bills. They usually nest on the ground. They feed on flying insects. The Least Nighthawk, at and ,...
(nighthawks)

Also see a list of nightjars, sortable by common and binomial names.