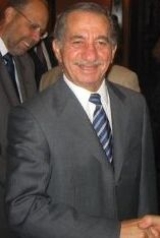 Encyclopedia
Tassos Nikolaou Papadopoulos (in Greek
Greek language
Greek is an independent branch of the Indo-European family of languages. Native to the southern Balkans, it has the longest documented history of any Indo-European language, spanning 34 centuries of written records. Its writing system has been the Greek alphabet for the majority of its history;...
, Τάσσος (Ευστάθιος) Νικολάου Παπαδόπουλος– 7 January 1934 – 12 December 2008) was a Cypriot politician. He served as the fifth President of the Republic of Cyprus
Cyprus
Cyprus , officially the Republic of Cyprus , is a Eurasian island country, member of the European Union, in the Eastern Mediterranean, east of Greece, south of Turkey, west of Syria and north of Egypt. It is the third largest island in the Mediterranean Sea.The earliest known human activity on the...
from February 28, 2003 to February 28, 2008.

His parents were Nicolas and Aggeliki from Assia. He was the first of three children. Papadopoulos attended the Ayios Kassianos and Elenio primary schools in Nicosia and then the Pancyprian Gymnasium
Pancyprian Gymnasium
The Pancyprian Gymnasium was founded in 1812 by Archbishop Kyprianos at a time when Cyprus was still under Ottoman occupation. It was originally called the Hellenic School and is the oldest high school still in operation on the island...
. His father's circle which included lawyers and judges, were influential on his future career and he went on to study law at King's College London
King's College London
King's College London is a public research university located in London, United Kingdom and a constituent college of the federal University of London. King's has a claim to being the third oldest university in England, having been founded by King George IV and the Duke of Wellington in 1829, and...
before becoming a barrister-at-law through Gray's Inn
Gray's Inn
The Honourable Society of Gray's Inn, commonly known as Gray's Inn, is one of the four Inns of Court in London. To be called to the Bar and practise as a barrister in England and Wales, an individual must belong to one of these Inns...
.

His life in London would prove to be pivotal in his future political life. In the second year of his studies he lived with future politician Spyros Kyprianou
Spyros Kyprianou
Spyros Achilleos Kyprianou was one of the most prominent politicians of modern Cyprus. He served as the second President of the Republic of Cyprus from 1977 to 1988....
and Lellos Demetriades (lawyer and future mayor of Nicosia) both of whom had started their political life by founding EFEKA (short for National Student Union of Cypriots in England).

Papadopoulos returned to Cyprus on the 20th of March 1955, ten days before the start of EOKA
EOKA
EOKA was an anticolonial, antiimperialist nationalist organisation with the ultimate goal of "The liberation of Cyprus from the British yoke". Although not stated in its initial declaration of existence which was printed and distributed on the 1st of April 1955, EOKA also had a target of achieving...
's armed struggle against British colonialism. At first he joined EOKA and became regional chief operations in Nicosia, whilst Polycarpos Yiorkadjis was held captive. Soon however, he became active in PEKA
PEKA
PEKA, "Politiki Epitropi Kypriakou Agona" , was the political wing of the EOKA movement which fought against the British and Turkish Cypriots for the union of Cyprus with Greece between 1955 and 1959. It was founded in the Summer of 1956 with the specific aims to:1. Co-ordinate the political and...
, the political arm of the EOKA guerilla organisation. In 1958, aged 24, he became PEKA's general secretary.

He took part in the London Conference in 1959 and was one of the two delegates (besides the AKEL delegates) who voted against the signing of the London and Zurich Agreements. He was also one of the four representatives of the Greek Cypriot side at the Constitutional Commission which drafted the Constitution of the Republic of Cyprus.

In 1969 he co-founded the Eniaion Komma (United Party)
Eniaion
The Eniaion Party translating as the United Party was a short-lived political party in Cyprus. Its origins came from a previous party, the Patriotic Front . The party was founded by Glafkos Klerides and Tassos Papadopoulos on February 5, 1969...
a party aligned to and supportive of Makarios
Makarios III
Makarios III , born Andreas Christodolou Mouskos , was the archbishop and primate of the autocephalous Cypriot Orthodox Church and the first President of the Republic of Cyprus ....
. Glafcos Clerides became president whilst Papadopoulos remained vice-president of the party. At the Parliamentary elections held on 15 July 1970 he was elected member of the House of Representatives, standing as an Eniaion Party candidate for the Nicosia constituency. However, following a difference of opinion with the leader he later resigned from the party.

Until his election he practised law in Nicosia.

Standing as an independent candidate, he was re-elected in the election of 5 September 1976. From July 22, to September 20, 1976 he served as President of the House of Representatives. In the 19 May 1991 parliamentary elections he was elected member of the House of Representatives, standing as a candidate for the Democratic Party
Democratic Party (Cyprus)
The Democratic Party is a centrist political party in Cyprus, founded in 1976 by Spyros Kyprianou. As it is reported in its founding statement , the Democratic Party proposes to the Cypriot society the political philosophy of "social centrism", which constitutes “a total of attributes and values...
in the Nicosia constituency. He was re-elected on 26 May 1996.

He campaigned for the 2003 presidential election
Cypriot presidential election, 2003
Presidential elections were held in Cyprus on 16 February 2003. The election was dominated by the ongoing negotiations over the Annan Plan for Cyprus. Incumbent President Glafkos Klerides was largely in favour of the plan, while leading opposition candidate Tassos Papadopoulos wanted substantial...
on a platform that he would be able to secure a better deal over the Cyprus dispute
Cyprus dispute
The Cyprus dispute is the result of the ongoing conflict between the Republic of Cyprus and Turkey, over the Turkish occupied northern part of Cyprus....
than the incumbent Glafcos Clerides. He was backed by not just his own party, Diko, but also the party of the Left AKEL and social democrat Kisos.

Papadopoulos assumed the Presidency on 28 February 2003 after winning a first round majority with 51.51% of the vote.
Before the 2004 Annan Plan Referendum he urged Greek Cypriots to vote No, declaring "I received a state. I will not deliver a community".

Papadopoulos was a candidate for a second term in office in the 2008 presidential election
Cypriot presidential election, 2008
A presidential election was held in Cyprus on 17 February 2008, with the second round held on 24 February 2008. The second-round winner, and thus the President of Cyprus for the next term, is Dimitris Christofias....
. In the first round, held on February 17, he placed third, slightly behind Dimitris Christofias
Dimitris Christofias
Dimitris Christofias also Demetris is a left-wing Greek Cypriot politician and the current and sixth President of the Republic of Cyprus. Christofias was the General Secretary of AKEL and is Cyprus's first, and the European Union's first and so far only, communist head of state. He won the 2008...
and Ioannis Kasoulides
Ioannis Kasoulides
Ioannis Kasoulides is a Cypriot politician and member of European Parliament.He is member of European People's Party and Democratic Rally He was elected as member of Cyprus Parliament on 1991 and also served as minister of the government of Cyprus for the period 1993-2003.Ioannis Kasoulides is...
with about 31.8% of the vote, and was therefore eliminated from the second round. He had enjoyed a slight advantage in opinion polls prior to the election and his elimination was regarded as a surprise. He promptly conceded defeat on the day of the election.

He was married to Fotini Michaelides (of the family of Anastasios Leventis
Anastasios George Leventis
Anastasios George Leventis was a prominent Cypriot businessman who owned a major merchandise trading firm in West Africa.-Career:...
) and they have four children: Constantinos and Maria (from Fotini's previous marriage with Polykarpos Georkadjis
Polycarpos Georgadjis
Polycarpos Georgatzis was a Cypriot politician. He served as the first Minister of the Interior of the Republic of Cyprus. He also served as provisional minister of Labour in the period leading to Cyprus being proclaimed an independent state. Before entering the political stage he fought for EOKA...
), and Nikolas and Anastasia.

Tassos Papadopoulos died on December 12, 2008 at 13:05 pm of small cell lung carcinoma
Small cell carcinoma
Small cell carcinoma is a type of highly malignant cancer that most commonly arises within the lung, although it can occasionally arise in other body sites, such as the cervix and prostate....
. He was a heavy smoker. Papadopoulos had been admitted to the Intensive Care Unit of the Nicosia General Hospital on November 22 for the disease. The funeral took place on December 15, 2008 in Agia Sophia church in Nicosia.

On 11 December 2009, it was reported that thieves had dug up the grave and stolen the body of the former president. Republic of Cyprus President Dimitris Christofias
Dimitris Christofias
Dimitris Christofias also Demetris is a left-wing Greek Cypriot politician and the current and sixth President of the Republic of Cyprus. Christofias was the General Secretary of AKEL and is Cyprus's first, and the European Union's first and so far only, communist head of state. He won the 2008...
described it as "sacrilege". On 8 March 2010, the body was discovered in a cemetery near the capital. The family expressed their relief and rejected claims that any ransom had been paid.

Cypriot police said that DNA results obtained early on 9 March 2010 positively identify the corpse as Papadopoulos's after a telephone tip-off led police to the body the night before.