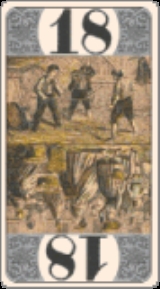 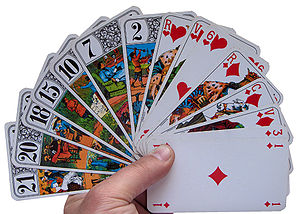 The Tarot Nouveau, French Tarot Nouveau or Bourgeois Tarot deck is a general style of tarot
Tarot
The tarot |trionfi]] and later as tarocchi, tarock, and others) is a pack of cards , used from the mid-15th century in various parts of Europe to play a group of card games such as Italian tarocchini and French tarot...
playing card
Playing card
A playing card is a piece of specially prepared heavy paper, thin cardboard, plastic-coated paper, cotton-paper blend, or thin plastic, marked with distinguishing motifs and used as one of a set for playing card games...
deck. The Tarot Nouveau differs from other styles of tarot deck, such as the Tarot of Marseilles
Tarot of Marseilles
The Tarot of Marseilles , also widely known by the French designation Tarot de Marseille, is one of the standard patterns for the design of tarot cards...
and Rider-Waite decks, in that the Tarot Nouveau is designed solely for playing the various tarot card games for which the 78-card tarot deck was originally devised, such as French Tarot. In the French language, this deck is often called the tarot à jouer or playing tarot. This usage is distinct from cartomancy
Cartomancy
Cartomancy is fortune-telling or divination using a deck of cards. Forms of cartomancy appeared soon after playing cards were first introduced into Europe in the 14th century...
and other divinatory
Divination
Divination is the attempt to gain insight into a question or situation by way of an occultic standardized process or ritual...
purposes, for which the tarot is most commonly known outside of Continental Europe
Europe
Europe is, by convention, one of the world's seven continents. Comprising the westernmost peninsula of Eurasia, Europe is generally 'divided' from Asia to its east by the watershed divides of the Ural and Caucasus Mountains, the Ural River, the Caspian and Black Seas, and the waterways connecting...
.

This pattern is said to have originated in the late 19th century with the C.L. Wüst cardmaker of Frankfurt Germany. This earlier edition lacked the corner indices found on the later 20th century version published by French cardmakers such as Grimaud, but the values of trumps changed from Latin numerals common on older decks to Arabic numbers used in modern writing. These numerals were placed in the center of the panels in a Fraktur
Fraktur
Fraktur is a calligraphic hand and any of several blackletter typefaces derived from this hand. The word derives from the past participle fractus of Latin frangere...
font similar to cards which were used for the German Tarock game of Cego
Cego
Cego , also called Ceco, from the Latin "Caecus" or "blind", is a trick-taking card game played mainly in Baden, Schwarzwald, and Lake Constance, in Switzerland. The game is similar to French tarot and Austrian Tarock...
. In the early 1900s, French cardmakers such as Grimaud appropriated this pattern and would later add the corner indices now found on most modern card decks.

The cards bear the French suit
Suit (cards)
In playing cards, a suit is one of several categories into which the cards of a deck are divided. Most often, each card bears one of several symbols showing to which suit it belongs; the suit may alternatively or in addition be indicated by the color printed on the card...
s of Spades, Hearts, Diamonds and Clubs, rather than the Italian suits of Swords, Cups, Coins and Wands (typical in tarot
Tarot
The tarot |trionfi]] and later as tarocchi, tarock, and others) is a pack of cards , used from the mid-15th century in various parts of Europe to play a group of card games such as Italian tarocchini and French tarot...
decks used for Cartomancy) or the traditional German suits of Hearts, Bells, Acorns and Leaves. The "pip" and court cards of the Tarot Nouveau (which are called Minor Arcana
Minor Arcana
|thumb|[[King of Swords]] card from a Minor Arcana deckThe Minor Arcana of occult or divinatory tarot refers to the portion of a Tarot deck that consists of 56 cards. The Minor Arcana are roughly similar to the cards found in a common deck of playing cards...
in cartomancy
Cartomancy
Cartomancy is fortune-telling or divination using a deck of cards. Forms of cartomancy appeared soon after playing cards were first introduced into Europe in the 14th century...
) are similar in format to those of the traditional 52-card Anglo-American deck with the addition of the Knight court card.

The atouts or trumps depict genre scenes of whimsical early 19th-century social activities of the well-to-do European bourgeoisie
Bourgeoisie
In sociology and political science, bourgeoisie describes a range of groups across history. In the Western world, between the late 18th century and the present day, the bourgeoisie is a social class "characterized by their ownership of capital and their related culture." A member of the...
, hence a common alternate name for this deck, the "Bourgeois Tarot". This is in contrast to the trionfi of Italian Tarocco decks and the Major Arcana
Major Arcana
The Major Arcana or trumps are a suit of twenty-two cards in the tarot deck. They serve as a permanent trump suit in games played with the tarot deck, and are distinguished from the four standard suits collectively known as the Minor Arcana...
of "esoteric" decks used for cartomancy
Cartomancy
Cartomancy is fortune-telling or divination using a deck of cards. Forms of cartomancy appeared soon after playing cards were first introduced into Europe in the 14th century...
, which have allegorical illustrations and, in cartomancy, interpretive meaning.

All cards use corner indices as opposed to the top-center indices of older tarot decks and their "esoteric" descendants used for readings; this allows the cards to be held in a single hand as is required for many card games. They also include reversible art for court and trump cards while traditional and modern reading tarots have full-length character art.

The Tarot Nouveau deck, like most (but not all) tarot decks, is composed of 78 cards. 56 are suited in the traditional French suits, with 14 cards per suit; ten "pip" cards with values 1-10 (the Ace
Ace
An ace is a playing card. In the standard French deck, an ace has a single suit symbol located in the middle of the card, sometimes large and decorated, especially in the case of the Ace of Spades...
bears the number 1 instead of the familiar "A", and usually ranks low), and four court cards: Jack (Valet), Knight (Chevalier or Cavalier), Queen (Dame) and King (Roi). The other 22, shown in the top two rows of the image below, are the 21 atouts or trumps and one Fool. The deck is thus primarily different from the 52-card Poker deck in the existence of the separate trump "suit", and the addition of the Knight court card. With these cards removed the deck is identical to the Anglo-American deck for playing purposes. The Fool, though similar in appearance and function to the Joker card of poker decks, has differing origins (see Joker
Joker (playing card)
Joker is a special type of playing card found in most modern decks, or else a type of tile in some Mahjong game sets.-Name:It is believed that the term "Joker" comes from a mispronunciation of Jucker, the German/Alsatian name for the game Euchre. The card was originally introduced in about 1860 for...
for more information).

The 21 trumps in a tarot nouveau deck are as follows: