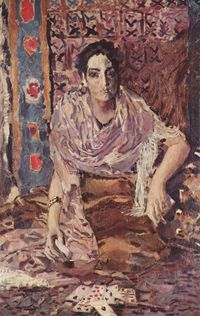 Cartomancy is fortune-telling
Fortune-telling
Fortune-telling is the practice of predicting information about a person's life. The scope of fortune-telling is in principle identical with the practice of divination...
or divination
Divination
Divination is the attempt to gain insight into a question or situation by way of an occultic standardized process or ritual...
using a deck of cards. Forms of cartomancy appeared soon after playing card
Playing card
A playing card is a piece of specially prepared heavy paper, thin cardboard, plastic-coated paper, cotton-paper blend, or thin plastic, marked with distinguishing motifs and used as one of a set for playing card games...
s were first introduced into Europe
Europe
Europe is, by convention, one of the world's seven continents. Comprising the westernmost peninsula of Eurasia, Europe is generally 'divided' from Asia to its east by the watershed divides of the Ural and Caucasus Mountains, the Ural River, the Caspian and Black Seas, and the waterways connecting...
in the 14th century. Practitioners of cartomancy are generally known as cartomancers, card readers or, simply, readers.

Cartomancy using standard playing cards was the most popular form of providing "fortune telling" card readings in the 18th, 19th and 20th centuries. In English-speaking countries, a standard deck of Anglo-American bridge
Bridge
A bridge is a structure built to span physical obstacles such as a body of water, valley, or road, for the purpose of providing passage over the obstacle...
/poker
Poker
Poker is a family of card games that share betting rules and usually hand rankings. Poker games differ in how the cards are dealt, how hands may be formed, whether the high or low hand wins the pot in a showdown , limits on bet sizes, and how many rounds of betting are allowed.In most modern poker...
playing cards (i.e., 52-card, four suit set) can be used in the cartomancy reading; the deck is often augmented with jokers
Joker (playing card)
Joker is a special type of playing card found in most modern decks, or else a type of tile in some Mahjong game sets.-Name:It is believed that the term "Joker" comes from a mispronunciation of Jucker, the German/Alsatian name for the game Euchre. The card was originally introduced in about 1860 for...
, and even with the blank card found in many packaged decks. In France, the 32-card piquet
Piquet
Piquet is an early 16th-century trick-taking card game for two players.- History :Piquet has long been regarded as one of the all-time great card games still being played. It was first mentioned on a written reference dating to 1535, in Gargantua and Pantagruel by Rabelais...
playing card deck was, and still is, most typically used in cartomancy readings, while the 52-card deck was, and still is, also used for this purpose. (For a piquet deck, start with a 52-card deck and remove all of the 2s through the 6s. This leaves all of the 7s through the 10s, the face cards, and the aces.)

The Tarot
Tarot
The tarot |trionfi]] and later as tarocchi, tarock, and others) is a pack of cards , used from the mid-15th century in various parts of Europe to play a group of card games such as Italian tarocchini and French tarot...
can also be used in cartomancy.

The most popular method of cartomancy using a standard playing deck is referred to as the Wheel of Fortune. Here the reader will remove cards at random and assign significance to them based in the order they were chosen. Though the interpretation of various cards varies by region, the common common significators for the future are as follows:

The interpretations of the meanings of different cards even within the same deck varies greatly among cartomancers. This raises doubt in the idea that there is some objective message coming directly from the cards, as might be necessary for amateur cartomancers to derive use from them. Most parapsychologists
Parapsychology
The term parapsychology was coined in or around 1889 by philosopher Max Dessoir, and originates from para meaning "alongside", and psychology. The term was adopted by J.B. Rhine in the 1930s as a replacement for the term psychical research...
would argue that the card reader's psi
Psi (parapsychology)
Psi is a term from parapsychology derived from the Greek, ψ psi, 23rd letter of the Greek alphabet; from the Greek ψυχή psyche, "mind, soul".-Etymology:...
faculties ought to play a significant role in determining both how the cards land and how they are interpreted - making the lack of an objective standard irrelevant. The lack of a shared understanding of card meanings hinders both verification of cartomancy's effectiveness and communication between practitioners.

Cartomancy has also been criticized for not providing a proposed physical mechanism by which cards could be used to predict one's future. Additionally, there have been no tests to date that show that cartomancy does any better than chance in either predicting the future or determining traits about individuals, despite large incentives to cartomancers who can show a successful test, such as the Randi challenge.
The source of this article is wikipedia, the free encyclopedia.  The text of this article is licensed under the GFDL.