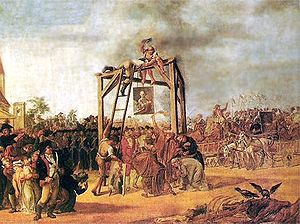 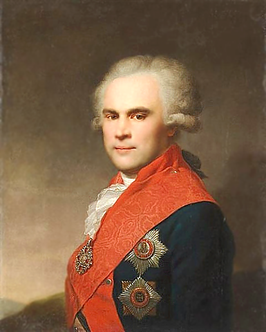 The Targowica Confederation was a confederation
Confederation (Poland)
A konfederacja was an ad hoc association formed by Polish-Lithuanian szlachta A konfederacja (Polish for "confederation") was an ad hoc association formed by Polish-Lithuanian szlachta A konfederacja (Polish for "confederation") was an ad hoc association formed by Polish-Lithuanian szlachta...
established by Polish and Lithuanian
Polish-Lithuanian Commonwealth
The Polish–Lithuanian Commonwealth was a dualistic state of Poland and Lithuania ruled by a common monarch. It was the largest and one of the most populous countries of 16th- and 17th‑century Europe with some and a multi-ethnic population of 11 million at its peak in the early 17th century...
magnate
Magnate
Magnate, from the Late Latin magnas, a great man, itself from Latin magnus 'great', designates a noble or other man in a high social position, by birth, wealth or other qualities...
s on 27 April 1792, in Saint Petersburg
Saint Petersburg
Saint Petersburg is a city and a federal subject of Russia located on the Neva River at the head of the Gulf of Finland on the Baltic Sea...
, with the backing of the Russian Empress Catherine II
Catherine II of Russia
Catherine II, also known as Catherine the Great , Empress of Russia, was born in Stettin, Pomerania, Prussia on as Sophie Friederike Auguste von Anhalt-Zerbst-Dornburg...
. The confederation opposed the Polish Constitution of May 3, 1791, which had been adopted by the Great Sejm
Great Sejm
The Great Sejm, also known as the Four-Year Sejm was a Sejm of the Polish-Lithuanian Commonwealth that was held in Warsaw, beginning in 1788...
, especially the provisions limiting the privileges of the nobility. The text of the founding act of the confederation was written by the Russian general Vasili Stepanovich Popov
Vasili Stepanovich Popov
Vasili Stepanovich Popov was an imperial Russian general and statesman who presided over the office of Prince Potemkin.In 1792 Popov advised Empress Catherine II of Russia on Polish affairs. It was he who authored the Targowicka Confederation founding act. Emperor Paul made him senator. Popov had...
, Chief of Staff of Prince Grigori Alexandrovich Potemkin
Grigori Alexandrovich Potemkin
Prince Grigory Aleksandrovich Potemkin-Tavricheski was a Russian military leader, statesman, nobleman and favorite of Catherine the Great. He died during negotiations over the Treaty of Jassy, which ended a war with the Ottoman Empire that he had overseen....
. Its purpose was proclaimed in the small town of Targowica (now in Kirovohrad Oblast
Kirovohrad Oblast
Kirovohrad Oblast is an oblast of Ukraine. The administrative center of the oblast is the city of Kirovohrad.-Geography:The area of the province is , its population is 1.1 million....
, Ukraine
Ukraine
Ukraine is a country in Eastern Europe. It has an area of 603,628 km², making it the second largest contiguous country on the European continent, after Russia...
) on May 14, 1792. Four days later two Russian armies invaded the Polish-Lithuanian Commonwealth without a formal declaration of war
Declaration of war
A declaration of war is a formal act by which one nation goes to war against another. The declaration is a performative speech act by an authorized party of a national government in order to create a state of war between two or more states.The legality of who is competent to declare war varies...
.

The forces of the Targowica Confederation defeated the forces loyal to the Polish-Lithuanian Commonwealth
Polish-Lithuanian Commonwealth
The Polish–Lithuanian Commonwealth was a dualistic state of Poland and Lithuania ruled by a common monarch. It was the largest and one of the most populous countries of 16th- and 17th‑century Europe with some and a multi-ethnic population of 11 million at its peak in the early 17th century...
, the Sejm and King Stanisław August Poniatowski in the Polish–Russian War of 1792. As a result the King, Poniatowski, formally joined the Confederation. Their victory precipitated the Second Partition of Poland and set the stage for the Third Partition and the final dissolution of the Commonwealth in 1795. This outcome came as a surprise to most of the Confederates, who had wished only to restore the status quo ante
Status quo ante bellum
The term status quo ante bellum is Latin, meaning literally "the state in which things were before the war".The term was originally used in treaties to refer to the withdrawal of enemy troops and the restoration of prewar leadership. When used as such, it means that no side gains or loses...
and had expected that the overthrow of the May 3rd Constitution would achieve that end.

The nickname "targowiczanin", describing the supporters of this confederation, became a negative political epithet in Poland, akin to "foolish traitor", still used up to the modern day.


"The desires of Her Highness Empress of Russia [Catherine the Great], ally of Rzeczpospolita [the Commonwealth], are and were no other than by using her armies to return to Rzeczpospolita and Poles the freedoms, and especially security and happiness to all citizens"


"Each true Pole, not blinded by the Prussian and royalist cabal, is convinced, that our Fatherland can only be saved by Russia, otherwise our nation will be enslaved".


"About past Poland and Poles [I don't want to talk anymore]. Gone is this country, and this name, as many others have perished in the world's history. I am now a Russian forever."