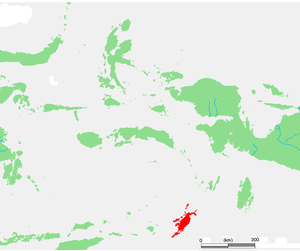 The Tanimbar Islands, also called Timor Laut, are a group of about 65 island
Island
An island or isle is any piece of sub-continental land that is surrounded by water. Very small islands such as emergent land features on atolls can be called islets, cays or keys. An island in a river or lake may be called an eyot , or holm...
s in the Maluku province
Provinces of Indonesia
The province is the highest tier of local government subnational entity in Indonesia. Each province has its own local government, headed by a governor, and has its own legislative body...
of Indonesia
Indonesia
Indonesia , officially the Republic of Indonesia , is a country in Southeast Asia and Oceania. Indonesia is an archipelago comprising approximately 13,000 islands. It has 33 provinces with over 238 million people, and is the world's fourth most populous country. Indonesia is a republic, with an...
, including Fordata, Larat, Maru, Molu, Nuswotar, Selaru
Selaru
Selaru is an island in Indonesia in the Tanimbar Islands group, Southeast Maluku. It is located south of Yamdena.-External links:**...
, Selu, Seira, Wotap, Wuliaru and Yamdena
Yamdena
Yamdena is the largest of the Tanimbar Islands in the Maluku Province of Indonesia. Saumlaki is the chief town, located on the south end of the island....
.

The Aru Islands
Aru Islands
The Aru Islands are a group of about ninety-five low-lying islands in the Maluku province of eastern Indonesia. They also form a regency of Indonesia.-Geography:...
and Kai Islands
Kai Islands
The Kai Islands of Indonesia are in the south-eastern part of the Maluku Islands, in Maluku Province.-Geography:...
lie to the northeast, and Babar Island
Babar Island
The Babar Islands are located in Maluku Province, Indonesia between latitudes 7 degrees 31 minutes South to 8 degrees 13 minutes South and from longitudes 129 degrees 30 minutes East to 130 degrees 05 minutes East...
and Timor
Timor
Timor is an island at the southern end of Maritime Southeast Asia, north of the Timor Sea. It is divided between the independent state of East Timor, and West Timor, belonging to the Indonesian province of East Nusa Tenggara. The island's surface is 30,777 square kilometres...
lie to the west. The islands separate the Banda Sea
Banda Sea
The Banda Sea is a sea in the Maluku Islands of Indonesia, technically part of the Pacific Ocean but separated from it by hundreds of islands, as well as the Halmahera and Ceram Seas...
and the Arafura Sea
Arafura Sea
The Arafura Sea lies west of the Pacific Ocean overlying the continental shelf between Australia and New Guinea.-Geography:The Arafura Sea is bordered by Torres Strait and through that the Coral Sea to the east, the Gulf of Carpentaria to the south, the Timor Sea to the west and the Banda and Ceram...
. The total land area of the Islands is 5440 km² (2100 sq mi).

The tiny island of Tanimbarkei is part not part of Tanimbar, but of the Kai Islands
Kai Islands
The Kai Islands of Indonesia are in the south-eastern part of the Maluku Islands, in Maluku Province.-Geography:...
and inhabited by less than 1000 very traditional people.

The Tanimbar Islands are part of the Banda Sea Islands moist deciduous forests ecoregion
Ecoregion
An ecoregion , sometimes called a bioregion, is an ecologically and geographically defined area that is smaller than an ecozone and larger than an ecosystem. Ecoregions cover relatively large areas of land or water, and contain characteristic, geographically distinct assemblages of natural...
.

The Tanimbar Islands were part of the Dutch East Indies
Dutch East Indies
The Dutch East Indies was a Dutch colony that became modern Indonesia following World War II. It was formed from the nationalised colonies of the Dutch East India Company, which came under the administration of the Netherlands government in 1800....
. During World War II
World War II
World War II, or the Second World War , was a global conflict lasting from 1939 to 1945, involving most of the world's nations—including all of the great powers—eventually forming two opposing military alliances: the Allies and the Axis...
the Dutch sent a detachment of 13 men to the town of Saumlaki in the Tanimbar Islands in July 1942. Japanese ships entered the bay at Saumlaki on July 30th and small boats were used to get to the jetty. The Japanese filed in ranks on the jetty and wanted to march in close order into Saumlaki. The garrison
Garrison
Garrison is the collective term for a body of troops stationed in a particular location, originally to guard it, but now often simply using it as a home base....
opened fire at close range with their two light machineguns. The Japanese retreated to their boats leaving several dead on the jetty.
On 31 July 1942 an Australian contingent arriving at the jetty at Saumlaki was fired on from the shore and the commander on board was killed - the Australians returned to Darwin
Darwin, Northern Territory
Darwin is the capital city of the Northern Territory, Australia. Situated on the Timor Sea, Darwin has a population of 127,500, making it by far the largest and most populated city in the sparsely populated Northern Territory, but the least populous of all Australia's capital cities...
. Next the garrison came under naval gunfire which inflicted some casualties, followed by a second attack on a wider front. Seven survivors withdrew and boarded a sailing ship and escaped to Australia
Australia
Australia , officially the Commonwealth of Australia, is a country in the Southern Hemisphere comprising the mainland of the Australian continent, the island of Tasmania, and numerous smaller islands in the Indian and Pacific Oceans. It is the world's sixth-largest country by total area...
.

Important products are copra
Copra
Copra is the dried meat, or kernel, of the coconut. Coconut oil extracted from it has made copra an important agricultural commodity for many coconut-producing countries. It also yields coconut cake which is mainly used as feed for livestock.-Production:...
, tortoiseshell, and trepang (an edible sea cucumber
Sea cucumber (food)
Sea cucumbers are marine animals of the class Holothuroidea used in fresh or dried form in various cuisines.The creature and the food product is commonly known as bêche-de-mer in French, trepang in Indonesian, namako in Japanese and in the Philippines it is called balatan...
).