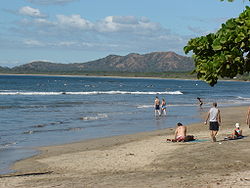 Tamarindo is a town and distrito located on the Northern Pacific coast of Costa Rica
Costa Rica
Costa Rica , officially the Republic of Costa Rica is a multilingual, multiethnic and multicultural country in Central America, bordered by Nicaragua to the north, Panama to the southeast, the Pacific Ocean to the west and the Caribbean Sea to the east....
in the Province of Guanacaste
Guanacaste Province
Guanacaste is a province of Costa Rica located in the northwestern part of the country, along the coast of the Pacific Ocean. To the north it borders Nicaragua. To the east is the Alajuela Province, and to the southeast is the Puntarenas Province. It is the most sparsely populated of all the...
. The district has a population of 3,525, although the town itself is about 500. But it can swell to 5,000 people or more during the tourist season and during special holidays. The main attractions are surfing
Surfing
Surfing' is a surface water sport in which the surfer rides a surfboard on the crest and face of a wave which is carrying the surfer towards the shore...
and eco-tourism.

Playa Tamarindo is a long beach, with excellent waves near the mouth of the estuary
Estuary
An estuary is a partly enclosed coastal body of water with one or more rivers or streams flowing into it, and with a free connection to the open sea....
. Currents can be strong, especially on a falling tide. Tamarindo has two main breaks for advanced surfers: Pico Pequeño a rocky point in front of the Hotel Tamarindo Diriá and the excellent river mouth break across from Cabinas Tsunami called El Estero. The rest of the beach breaks are perfect for learning. The biggest waves can get up to 12 feet, although only during November and December.

Playa Grande beach is also where the Leatherback Turtle comes to lay its eggs. The leatherbacks take over the beach from November to April, digging their nests up to one meter deep, lay their eggs and cover the pit with sand, and return once again to the sea. After 60 to 90 days, the hatchlings emerge and immediately make their way to the water.

There are other eco-friendly activities including watching turtles during their nesting season
Nesting season
The nesting season is the time of year during which birds and some other animals, particularly some reptiles, build nests, lay eggs in them, and in most cases bring up their young. It is usually in the spring....
at night, diving, snorkeling, body surfing, zip-lining, estuary trips, horseback riding and fishing. During the December to April period when the water turbidity is low, fishing may be done from the shore.

The beaches in the area are generally clean and recent efforts by the government and local business organizations are proving themselves. Unfortunately, the area has become a boon to developers who have cut corners and not installed proper infrastructure including black water treatment. While the beach has not regained its Blue Flag Status, in September 2008, it did get a clean bill of health from the Costa Rican Government. The town is trying to regain its Blue Flag Status.

Tamarindo Beach, Guanacaste is the most accessible location along the northern Pacific coast of Costa Rica with an airstrip
Tamarindo Airport
Tamarindo Airport is an airport that serves Tamarindo, Costa Rica. It is serviced daily from San José by SANSA and Nature Air. Private charter services are available as well. During the rainy season, the airport is frequently closed due to the weather...
. Scheduled daily bus service to and from San José, as well as surrounding communities, is available. There is also a paved highway from San José. The average time from San Jose to Tamarindo is 5 to 6 hours depending on traffic.