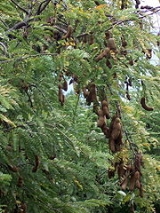 Overview
Tamarind (from , romanized tamar hind, "Indian date") is a tree
Tree
A tree is a perennial woody plant. It is most often defined as a woody plant that has many secondary branches supported clear of the ground on a single main stem or trunk with clear apical dominance. A minimum height specification at maturity is cited by some authors, varying from 3 m to...
in the family Fabaceae
Fabaceae
The Fabaceae or Leguminosae, commonly known as the legume, pea, or bean family, is a large and economically important family of flowering plants. The group is the third largest land plant family, behind only the Orchidaceae and Asteraceae, with 730 genera and over 19,400 species...
. The genus Tamarindus is monotypic (having only a single species).
Tamarindus indica is indigenous
Indigenous (ecology)
In biogeography, a species is defined as native to a given region or ecosystem if its presence in that region is the result of only natural processes, with no human intervention. Every natural organism has its own natural range of distribution in which it is regarded as native...
to tropical Africa
Tropical Africa
Although tropical Africa is most familiar in the West as depicted by its rain forests, this region of Africa is far more diverse. While the tropics are thought of as regions with warm to hot moist climates caused by latitude and the tropical rain belt, the geology of areas, particularly mountain...
, particularly in Sudan
Sudan
Sudan , officially the Republic of the Sudan , is a country in North Africa, sometimes considered part of the Middle East politically. It is bordered by Egypt to the north, the Red Sea to the northeast, Eritrea and Ethiopia to the east, South Sudan to the south, the Central African Republic to the...
, where it continues to grow wild; it is also cultivated in Cameroon
Cameroon
Cameroon, officially the Republic of Cameroon , is a country in west Central Africa. It is bordered by Nigeria to the west; Chad to the northeast; the Central African Republic to the east; and Equatorial Guinea, Gabon, and the Republic of the Congo to the south. Cameroon's coastline lies on the...
, Nigeria
Nigeria
Nigeria , officially the Federal Republic of Nigeria, is a federal constitutional republic comprising 36 states and its Federal Capital Territory, Abuja. The country is located in West Africa and shares land borders with the Republic of Benin in the west, Chad and Cameroon in the east, and Niger in...
and Tanzania
Tanzania
The United Republic of Tanzania is a country in East Africa bordered by Kenya and Uganda to the north, Rwanda, Burundi, and the Democratic Republic of the Congo to the west, and Zambia, Malawi, and Mozambique to the south. The country's eastern borders lie on the Indian Ocean.Tanzania is a state...
. In Arabia, it is found growing wild in Oman
Oman
Oman , officially called the Sultanate of Oman , is an Arab state in southwest Asia on the southeast coast of the Arabian Peninsula. It is bordered by the United Arab Emirates to the northwest, Saudi Arabia to the west, and Yemen to the southwest. The coast is formed by the Arabian Sea on the...
, especially Dhofar
Dhofar
The Dhofar region lies in Southern Oman, on the eastern border with Yemen. Its mountainous area covers and has a population of 215,960 as of the 2003 census. The largest town in the region is Salalah. Historically, it was the chief source of frankincense in the world. However, its frankincense...
, where it grows on the sea-facing slopes of mountains.

What is the cost of tamarind in egypt marcket

Leaf of tamarind is simple or complex
More
x