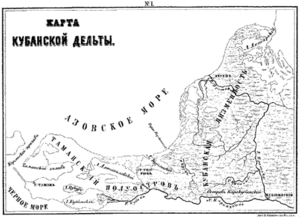 The Taman Peninsula is a peninsula
Peninsula
A peninsula is a piece of land that is bordered by water on three sides but connected to mainland. In many Germanic and Celtic languages and also in Baltic, Slavic and Hungarian, peninsulas are called "half-islands"....
in the present-day Krasnodar Krai
Krasnodar Krai
-External links:* **...
of Russia
Russia
Russia or , officially known as both Russia and the Russian Federation , is a country in northern Eurasia. It is a federal semi-presidential republic, comprising 83 federal subjects...
. It is bounded on the north by the Sea of Azov
Sea of Azov
The Sea of Azov , known in Classical Antiquity as Lake Maeotis, is a sea on the south of Eastern Europe. It is linked by the narrow Strait of Kerch to the Black Sea to the south and is bounded on the north by Ukraine mainland, on the east by Russia, and on the west by the Ukraine's Crimean...
, on the west by the Strait of Kerch
Strait of Kerch
The Kerch Strait connects the Black Sea and the Sea of Azov, separating the Kerch Peninsula in the west from the Taman Peninsula in the east. The strait is to wide and up to deep....
and on the south by the Black Sea
Black Sea
The Black Sea is bounded by Europe, Anatolia and the Caucasus and is ultimately connected to the Atlantic Ocean via the Mediterranean and the Aegean seas and various straits. The Bosphorus strait connects it to the Sea of Marmara, and the strait of the Dardanelles connects that sea to the Aegean...
. The peninsula has evolved over the past two millennia from a chain of islands into the peninsula it is today. In ancient times the Pontic Greek colonies of Hermonassa and Phanagoria were located on the peninsula, as was the later city of Tmutarakan
Tmutarakan
Tmutarakan was a Mediaeval Russian principality and trading town that controlled the Cimmerian Bosporus, the passage from the Black Sea to the Sea of Azov. Its site was the ancient Greek colony of Hermonassa . It was situated on the Taman peninsula, in the present-day Krasnodar Krai of Russia,...
.

The peninsula was settled by Maeotae
Maeotae
Maeotae or Mæotæ or Maeotici were an ancient people dwelling along the Palus Maeotis in antiquity. It is not clear whether they spoke an Iranian language or were related to the modern-day Adyghe. The best attested tribe among them was the Sindi.The earliest reference may be the logographer...
and Sindi
Sindi (people)
The Sindi were an ancient people in the Taman Peninsula and the adjacent coast of the Pontus Euxinus , in the district called Sindica, which spread between the modern towns of Temryuk and Novorossiysk...
from ancient times. In the classical period
Classical antiquity
Classical antiquity is a broad term for a long period of cultural history centered on the Mediterranean Sea, comprising the interlocking civilizations of ancient Greece and ancient Rome, collectively known as the Greco-Roman world...
it became part of the Bosporan kingdom
Bosporan Kingdom
The Bosporan Kingdom or the Kingdom of the Cimmerian Bosporus was an ancient state, located in eastern Crimea and the Taman Peninsula on the shores of the Cimmerian Bosporus...
; its inhabitants included Sarmatians
Sarmatians
The Iron Age Sarmatians were an Iranian people in Classical Antiquity, flourishing from about the 5th century BC to the 4th century AD....
, Greeks, Anatolia
Anatolia
Anatolia is a geographic and historical term denoting the westernmost protrusion of Asia, comprising the majority of the Republic of Turkey...
n settlers from Pontus
Pontus
Pontus or Pontos is a historical Greek designation for a region on the southern coast of the Black Sea, located in modern-day northeastern Turkey. The name was applied to the coastal region in antiquity by the Greeks who colonized the area, and derived from the Greek name of the Black Sea: Πόντος...
, and Jews
Jews
The Jews , also known as the Jewish people, are a nation and ethnoreligious group originating in the Israelites or Hebrews of the Ancient Near East. The Jewish ethnicity, nationality, and religion are strongly interrelated, as Judaism is the traditional faith of the Jewish nation...
. In the 4th century CE the area fell to the Huns
Huns
The Huns were a group of nomadic people who, appearing from east of the Volga River, migrated into Europe c. AD 370 and established the vast Hunnic Empire there. Since de Guignes linked them with the Xiongnu, who had been northern neighbours of China 300 years prior to the emergence of the Huns,...
; it was later the capital of Great Bulgaria and fell to the Khazars
Khazars
The Khazars were semi-nomadic Turkic people who established one of the largest polities of medieval Eurasia, with the capital of Atil and territory comprising much of modern-day European Russia, western Kazakhstan, eastern Ukraine, Azerbaijan, large portions of the northern Caucasus , parts of...
in the mid-7th century. Following the breakup of the Khazar Khaganate in c. 969, the peninsula was part of a Khazar Jewish successor state under a ruler named David
David of Taman
A purported Khazar ruler of the late tenth century CE who ruled over a Khazar successor-state in the Taman region. David is mentioned in a single document dated AM 4746 which contains a reference to "our lord David, Prince of the Khazars, who lives in Taman." The document in question is of...
. By the late 980s it was largely in the possession of the Kievan Rus and the Russian Principality of Tumutarakan before falling to the Kipchaks
Kipchaks
Kipchaks were a Turkic tribal confederation...
c. 1100. The Mongols seized the area in 1239 and it became a possession of Genoa
Genoa
Genoa |Ligurian]] Zena ; Latin and, archaically, English Genua) is a city and an important seaport in northern Italy, the capital of the Province of Genoa and of the region of Liguria....
, along with Gazaria in Crimea
Crimea
Crimea , or the Autonomous Republic of Crimea , is a sub-national unit, an autonomous republic, of Ukraine. It is located on the northern coast of the Black Sea, occupying a peninsula of the same name...
, in 1419.

For most of the 15th century the peninsula was ruled on behalf of Gazaria by the Guizolfi (Ghisolfi) family, founded by the Genoese Jew Simeone de Guizolfi. The rulership of the region by Jewish consul
Consul
Consul was the highest elected office of the Roman Republic and an appointive office under the Empire. The title was also used in other city states and also revived in modern states, notably in the First French Republic...
s, commissioners or princes has sparked much debate over the extent to which Khazar Judaism survived in southern Russia during this period. Ultimately, the Taman Peninsula was seized by the Khanate of Crimea in 1483 and by the Ottoman Empire
Ottoman Empire
The Ottoman EmpireIt was usually referred to as the "Ottoman Empire", the "Turkish Empire", the "Ottoman Caliphate" or more commonly "Turkey" by its contemporaries...
in 1783. In 1791, during the Second Russo-Turkish War, it passed into the control of the Russian Empire
Russian Empire
The Russian Empire was a state that existed from 1721 until the Russian Revolution of 1917. It was the successor to the Tsardom of Russia and the predecessor of the Soviet Union...
. Russia ceded it back to the Ottomans in 1792. It finally passed to Russia in 1828.

For much of the succeeding century, the area was sparsely populated. The largest settlement was a Cossack town (later a stanitsa
Stanitsa
Stanitsa is a village inside a Cossack host . Stanitsas were the primary unit of Cossack hosts.Historically, the stanitsa was a unit of economic and political organisation of the Cossack peoples primarily in the southern regions of the Russian Empire.Much of the land was held in common by the...
) of Taman
Taman, Russia
Taman is a village in Temryuksky District of Krasnodar Krai, Russia, located on the coast of the Taman Bay. Population: -History:Taman occupies the site of the ancient cities of Hermonassa and Tmutarakan...
, succeeded by the port town of Temryuk
Temryuk
Temryuk is the largest town and the administrative center of Temryuksky District of Krasnodar Krai, Russia, located on the Taman peninsula on the right bank of the Kuban River not far from its entry into the Temryuk Bay, amid a field of mud volcanoes. The seaport of Temryuk is situated from the...
in modern times. Mikhail Lermontov
Mikhail Lermontov
Mikhail Yuryevich Lermontov , a Russian Romantic writer, poet and painter, sometimes called "the poet of the Caucasus", became the most important Russian poet after Alexander Pushkin's death in 1837. Lermontov is considered the supreme poet of Russian literature alongside Pushkin and the greatest...
describes the town in his novel, "A Hero of Our Time
A Hero of Our Time
A Hero of Our Time is a novel by Mikhail Lermontov, written in 1839 and revised in 1841. It is an example of the superfluous man novel, noted for its compelling Byronic hero Pechorin and for the beautiful descriptions of the Caucasus...
". The peninsula contains small mud volcano
Mud volcano
The term mud volcano or mud dome are used to refer to formations created by geo-excreted liquids and gases, although there are several different processes which may cause such activity. Hot water mixes with mud and surface deposits. Mud volcanoes are associated with subduction zones and about 700...
es and deposits of natural gas
Natural gas
Natural gas is a naturally occurring gas mixture consisting primarily of methane, typically with 0–20% higher hydrocarbons . It is found associated with other hydrocarbon fuel, in coal beds, as methane clathrates, and is an important fuel source and a major feedstock for fertilizers.Most natural...
and petroleum
Petroleum
Petroleum or crude oil is a naturally occurring, flammable liquid consisting of a complex mixture of hydrocarbons of various molecular weights and other liquid organic compounds, that are found in geologic formations beneath the Earth's surface. Petroleum is recovered mostly through oil drilling...
.

The Taman Peninsula was occupied by the Germans
Germans
The Germans are a Germanic ethnic group native to Central Europe. The English term Germans has referred to the German-speaking population of the Holy Roman Empire since the Late Middle Ages....
in 1942 and taken back by the Red Army
Red Army
The Workers' and Peasants' Red Army started out as the Soviet Union's revolutionary communist combat groups during the Russian Civil War of 1918-1922. It grew into the national army of the Soviet Union. By the 1930s the Red Army was among the largest armies in history.The "Red Army" name refers to...
in 1943. The story of the motion picture Cross of Iron
Cross of Iron
Cross of Iron is a 1977 war film directed by Sam Peckinpah, featuring James Coburn, Maximilian Schell, James Mason and David Warner. The film is set on the Eastern Front in World War II during the Soviet's Caucasus operations that forced the Wehrmacht to retreat from the Taman Peninsula on the...
revolves around conflicts that arise within the leadership of a Wehrmacht
Wehrmacht
The Wehrmacht – from , to defend and , the might/power) were the unified armed forces of Nazi Germany from 1935 to 1945. It consisted of the Heer , the Kriegsmarine and the Luftwaffe .-Origin and use of the term:...
regiment during the German retreat from the Taman Peninsula.
The source of this article is wikipedia, the free encyclopedia.  The text of this article is licensed under the GFDL.