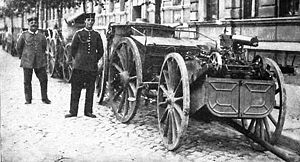 The tachanka was a horse-drawn machine gun
Machine gun
A machine gun is a fully automatic mounted or portable firearm, usually designed to fire rounds in quick succession from an ammunition belt or large-capacity magazine, typically at a rate of several hundred rounds per minute....
platform, usually a cart or an open wagon with a heavy machine gun
Heavy machine gun
The heavy machine gun or HMG is a larger class of machine gun generally recognized to refer to two separate stages of machine gun development. The term was originally used to refer to the early generation of machine guns which came into widespread use in World War I...
installed in the back. A tachanka could be pulled by two to four horses and required a crew of two or three (one driver and a machine gun crew). A number of sources attribute its invention to Nestor Makhno
Nestor Makhno
Nestor Ivanovych Makhno or simply Daddy Makhno was a Ukrainian anarcho-communist guerrilla leader turned army commander who led an independent anarchist army in Ukraine during the Russian Civil War....
.

There are at least two plausible hypotheses about origin of the word tachanka. The etymological dictionary
Etymological dictionary
An etymological dictionary discusses the etymology of the words listed. Often, large dictionaries, such as the OED and Webster's, will contain some etymological information, without aspiring to focus on etymology....
of Vasmer
Max Vasmer
Max Vasmer was a Russian-born German linguist who studied problems of etymology of Indo-European, Finno-Ugric and Turkic languages and worked on history of Slavic, Baltic, Iranian, and Finno-Ugric peoples....
suggests that the word derives from Ukrainian netychanka ("нетичанка"), Polish najtyczanka, a type of the carriage named after Neutitschein, now Nový Jičín
Nový Jicín
Nový Jičín is a town in the Moravian-Silesian Region of the Czech Republic. It has ca. 26,500 inhabitants. The city is situated on the spurs of the Carpathian Mountains about from the Czech Republic's 3rd biggest city, Ostrava...
in the Czech Republic
Czech Republic
The Czech Republic is a landlocked country in Central Europe. The country is bordered by Poland to the northeast, Slovakia to the east, Austria to the south, and Germany to the west and northwest....
. According to another opinion, it is a Ukrainian
Ukrainian language
Ukrainian is a language of the East Slavic subgroup of the Slavic languages. It is the official state language of Ukraine. Written Ukrainian uses a variant of the Cyrillic alphabet....
diminutive
Diminutive
In language structure, a diminutive, or diminutive form , is a formation of a word used to convey a slight degree of the root meaning, smallness of the object or quality named, encapsulation, intimacy, or endearment...
, or endearing form of the word tachka . Still another opinion is that it is a contracted word 'Tavrichanka' for rugged carriages known in Southern Ukraine
Ukraine
Ukraine is a country in Eastern Europe. It has an area of 603,628 km², making it the second largest contiguous country on the European continent, after Russia...
and Crimea
Crimea
Crimea , or the Autonomous Republic of Crimea , is a sub-national unit, an autonomous republic, of Ukraine. It is located on the northern coast of the Black Sea, occupying a peninsula of the same name...
, derived from the name "Taurida" for this area. 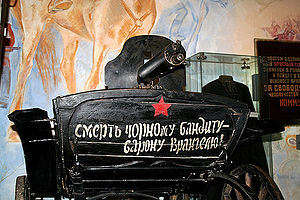 A regular civilian horse cart could be easily converted to military use and back. This made the tachanka very popular during the Great War
World War I
World War I , which was predominantly called the World War or the Great War from its occurrence until 1939, and the First World War or World War I thereafter, was a major war centred in Europe that began on 28 July 1914 and lasted until 11 November 1918...
on the Eastern Front
Eastern Front (World War I)
The Eastern Front was a theatre of war during World War I in Central and, primarily, Eastern Europe. The term is in contrast to the Western Front. Despite the geographical separation, the events in the two theatres strongly influenced each other...
, where it was used by the Russian cavalry. The use of tachankas reached its peak during the Russian Civil War
Russian Civil War
The Russian Civil War was a multi-party war that occurred within the former Russian Empire after the Russian provisional government collapsed to the Soviets, under the domination of the Bolshevik party. Soviet forces first assumed power in Petrograd The Russian Civil War (1917–1923) was a...
(1917–1920s), particularly in the peasant regions of Southern Russia
Russian Soviet Federative Socialist Republic
The Russian Soviet Federative Socialist Republic , commonly referred to as Soviet Russia, Bolshevik Russia, or simply Russia, was the largest, most populous and economically developed republic in the former Soviet Union....
and Ukraine
Ukrainian People's Republic
The Ukrainian People's Republic or Ukrainian National Republic was a republic that was declared in part of the territory of modern Ukraine after the Russian Revolution, eventually headed by Symon Petliura.-Revolutionary Wave:...
, where the fronts were fluid and mobile warfare
Mobile warfare
*For various forms of wars based on mobility, see Maneuver warfare.*For the specific military methods of Mao Zedong, yundong zhan, see Mobile Warfare....
gained much significance.

Tachanka tactics were centered around taking advantage of its speed to surprise the enemy. Tachankas, before the introduction of the tank or automobile to the battlefield, were the only way to provide high-speed mobility for the heavy, bulky machine guns of World War I. The speed of the horse-drawn cart would be used to move the machine gun platform to a favorable firing position, and then the enemy would be fired upon before they had a chance to react. Since the machine gun pointed towards the rear of the cart, the tachankas also provided effective suppressive fire onto pursuing enemy cavalry after raids and during retreats. Nestor Makhno pioneered the use of the tachanka en masse. Makhno's forces relied so heavily upon the use of the tachanka that one Makhnovite referred to himself and his fellow troops as "a republic on tachanki" The Revolutionary Insurrectionary Army of Ukraine
Revolutionary Insurrectionary Army of Ukraine
The Revolutionary Insurrectionary Army of Ukraine , popularly called Makhnovshchina, less correctly Makhnovchina, and also known as the Black Army, was an anarchist army formed largely of Ukrainian and Crimean peasants and workers under the command of the famous anarchist Nestor Makhno during the...
used tachankas mainly against enemy cavalry. Makhnovists also used tachankas to transport infantry, thus improving mobility of the army (about 100 km each day). Tachankas soon became used by the Red Army, with the famous example of Vasily Chapayev
Vasily Chapayev
Vasily Ivanovich Chapayev or Chapaev was a celebrated Russian soldier and Red Army commander during the Russian Civil War.-Biography:...
.

Later, it was adopted by a number of armies, notably the Polish Army which used it during the Polish-Soviet War
Polish-Soviet War
The Polish–Soviet War was an armed conflict between Soviet Russia and Soviet Ukraine and the Second Polish Republic and the Ukrainian People's Republic—four states in post–World War I Europe...
. Initially mostly improvised, with time the Polish Army also adopted two models of factory-made taczankas, as they were called in Poland. They were used during the Invasion of Poland
Invasion of Poland (1939)
The Invasion of Poland, also known as the September Campaign or 1939 Defensive War in Poland and the Poland Campaign in Germany, was an invasion of Poland by Germany, the Soviet Union, and a small Slovak contingent that marked the start of World War II in Europe...
of 1939 to provide cavalry squadron support. They were attached to every cavalry HMG squadron and HMG company of infantry.

Despite a certain degree of standardization, the tachanka's armament was, in most cases, improvised. In Russia, the PM M1910 was often used. The Polish cavalry of the Polish-Soviet War often used all kinds of machine guns available, including the Maxim, Schwarzlose MG M.07/12
Schwarzlose MG M.07/12
The Maschinengewehr Patent Schwarzlose M.07/12 was a medium machine-gun, and was used as a standard issue firearm in the Austro-Hungarian Army throughout World War I. It was also used by the Dutch, Greek and Hungarian armies during World War II...
, Hotchkiss machine gun
Hotchkiss M1914 machine gun
The Mle 1914 Hotchkiss machine gun became the standard machine gun of the French Army during World War I. It was manufactured by the French arms company Hotchkiss et Cie, which had been established in the 1860s by American industrialist Benjamin B. Hotchkiss...
and Browning machine gun. The late models of standardized tachankas of the Polish Army were all equipped with Ckm wz.30
Ckm wz.30
Ckm wz.30 is a Polish-made clone of the American Browning M1917 heavy machine gun...
, a Polish modification of the M1917 Browning machine gun, also suitable for anti-air fire. The tachankas were also adopted by the Wehrmacht
Wehrmacht
The Wehrmacht – from , to defend and , the might/power) were the unified armed forces of Nazi Germany from 1935 to 1945. It consisted of the Heer , the Kriegsmarine and the Luftwaffe .-Origin and use of the term:...
, which used the Jf. 5 model armed with double MG34 for anti-aircraft protection of infantry throughout World War II
World War II
World War II, or the Second World War , was a global conflict lasting from 1939 to 1945, involving most of the world's nations—including all of the great powers—eventually forming two opposing military alliances: the Allies and the Axis...
.

One of the songs glorifying the Red Army
Red Army
The Workers' and Peasants' Red Army started out as the Soviet Union's revolutionary communist combat groups during the Russian Civil War of 1918-1922. It grew into the national army of the Soviet Union. By the 1930s the Red Army was among the largest armies in history.The "Red Army" name refers to...
during the Russian Civil War was called "Tachanka". The concluding lyrics, roughly translated, run:

And to this day, the foe has nightmares
Of the thick rain of lead,
The battle-chariot
And the young machine gunner.