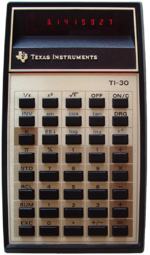 The original TI-30 was notable for its very low cost for the time, around US$25. This was much less than the retail prices of other scientific calculators of the era; for example, Hewlett-Packard's cheapest scientific at the time was still well over US$100. The Casio FX-20, another popular scientific calculator, sold for roughly double the price of the TI-30. The TI-30 sold for less than the cost of a professional grade slide rule
Slide rule
The slide rule, also known colloquially as a slipstick, is a mechanical analog computer. The slide rule is used primarily for multiplication and division, and also for functions such as roots, logarithms and trigonometry, but is not normally used for addition or subtraction.Slide rules come in a...
, which became rapidly obsolete. The TI-30 sold an estimated 15 million units during its lifespan from 1976–1983.

It is rumored that the original TI-30 got its name from a planned retail price of US$
United States dollar
The United States dollar , also referred to as the American dollar, is the official currency of the United States of America. It is divided into 100 smaller units called cents or pennies....
29.95 or US$30. Even if true, however, the MSRP was $24.95 at introduction, and all current models in the line are less than US$20 as of December 2007. However more elaborate graphing calculator
Graphing calculator
A graphing calculator typically refers to a class of handheld calculators that are capable of plotting graphs, solving simultaneous equations, and performing numerous other tasks with variables...
s such as the TI-84 which cost over $100 would become standardized in many public school curricula after the 1990s.

The original TI-30, a cost-reduced but functionally equivalent version of TI's SR-40 unit, utilized an LED
LEd
LEd is a TeX/LaTeX editing software working under Microsoft Windows. It is a freeware product....
display, was powered by a ubiquitous 9 volt
Volt
The volt is the SI derived unit for electric potential, electric potential difference, and electromotive force. The volt is named in honor of the Italian physicist Alessandro Volta , who invented the voltaic pile, possibly the first chemical battery.- Definition :A single volt is defined as the...
battery, and contained nearly all of its functionality in one chip, where previous calculators used many discrete components. The TI-30 could perform nearly all the logarithmic
Logarithm
The logarithm of a number is the exponent by which another fixed value, the base, has to be raised to produce that number. For example, the logarithm of 1000 to base 10 is 3, because 1000 is 10 to the power 3: More generally, if x = by, then y is the logarithm of x to base b, and is written...
and trigonometric
Trigonometry
Trigonometry is a branch of mathematics that studies triangles and the relationships between their sides and the angles between these sides. Trigonometry defines the trigonometric functions, which describe those relationships and have applicability to cyclical phenomena, such as waves...
functions of an HP-21, its primary competition at the time. Although the Texas Instruments SR-50
TI SR-50
The SR-50 was Texas Instruments' first scientific pocket calculator with trigonometric and logarithm functions. It enhanced their earlier SR-10 and SR-11 calculators, introduced in 1973, which had featured scientific notation, squares, square root, and reciprocals, but had no trig or log functions....
pioneered algebraic notation with precedence and parentheses in 1974, the TI-30 made those features available at a more affordable price.

Early production TI-30 units (circa 1976) contained a logic error in their calculation of inverse tangents. On these early models, pressing "0 INV TAN" would cause the calculator to go into an infinite loop until it was powered off with the OFF button. The "0" had to be pressed on the keyboard; the calculator produced a correct answer if the "0" was the result of a previous calculation. The TI-30 had much slower trig functions than the SR-50 (taking about 3 seconds compared to 1 second for the SR-50).

In 1980, Texas Instruments converted the TI-30 to use an LCD display, releasing the TI-30 LCD in Europe and the TI-30 II a year later in the U.S. The calculator itself remained functionally similar over several redesigns in the following few years, with solar power coming to the line in 1982 in a joint venture with Toshiba
Toshiba
is a multinational electronics and electrical equipment corporation headquartered in Tokyo, Japan. It is a diversified manufacturer and marketer of electrical products, spanning information & communications equipment and systems, Internet-based solutions and services, electronic components and...
. The X in all current TI-30 models refers to the addition of a 10+2 display (that is, a 10 digit mantissa
Mantissa
* The mantissa is the significand in a common logarithm or floating-point number.* Metaphorically, it is the part of the self that eludes conscious awareness or self-understanding.* An addition of little importance.Mantissa may also refer to:...
plus a 2-digit exponent) in 1993; with the addition of a 2-line display and a D-pad
D-pad
A D-pad is a flat, usually thumb-operated directional control with one button on each point, found on nearly all modern video game console gamepads, game controllers, on the remote control units of some television and DVD players, and smart phones...
in the XIIS/XIIB in 1999, the TI-30 line split in 2, with the TI-30Xa becoming TI's overall entry-level scientific, and the enhanced XII designs offering more input flexibility to the user. The MultiView models, introduced in 2006 and 2007, replace the 2-line display with a dot matrix
Dot matrix
A dot matrix is a 2-dimensional array of LED used to represent characters, symbols and images.Typically the dot matrix is used in older computer printers and many digital display devices. In printers, the dots are usually the darkened areas of the paper...
display similar to a graphing calculator
Graphing calculator
A graphing calculator typically refers to a class of handheld calculators that are capable of plotting graphs, solving simultaneous equations, and performing numerous other tasks with variables...
, and move many of the functions traditionally placed on or next to individual calculator keys off onto menus very similar to those used on the popular TI-83 calculator line.

At one time or another, most models in the line since the introduction of the LCD models have been available in both solar powered and battery versions; the Xa retains solar power only on models sold in a few markets in Europe, while the XIIS and XS MultiView models run off both solar and battery power depending on available ambient light. The earliest model, however, ran off of a 9 volt battery, and was said to drain the battery quite quickly, creating a market in aftermarket rechargeable battery upgrades.

The low cost, bulky case and easily accessible matrix keyboard made the TI-30 ideal for homebrew electronics projects requiring a large number of keys in a small package. Phone phreaks
Phreaking
Phreaking is a slang term coined to describe the activity of a culture of people who study, experiment with, or explore telecommunication systems, such as equipment and systems connected to public telephone networks. As telephone networks have become computerized, phreaking has become closely...
would rewire the keypad and introduce a pair of Intersil 8038 voltage control oscillator chips to produce blue box
Blue box
An early phreaking tool, the blue box is an electronic device that simulates a telephone operator's dialing console. It functioned by replicating the tones used to switch long-distance calls and using them to route the user's own call, bypassing the normal switching mechanism...
tones through a microphone plugged into a jack mounted in the recharge port.