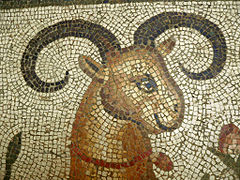 Syria was a Roman province
Roman province
In Ancient Rome, a province was the basic, and, until the Tetrarchy , largest territorial and administrative unit of the empire's territorial possessions outside of Italy...
, annexed in 64 BC by Pompey
Pompey
Gnaeus Pompeius Magnus, also known as Pompey or Pompey the Great , was a military and political leader of the late Roman Republic...
, as a consequence of his military presence after pursuing victory in the Third Mithridatic War
Third Mithridatic War
The Third Mithridatic War was the last and longest of three Mithridatic Wars fought between Mithridates VI of Pontus and his allies and the Roman Republic...
. It remained under Roman, and subsequently Byzantine
Byzantine
Byzantine usually refers to the Roman Empire during the Middle Ages.Byzantine may also refer to:* A citizen of the Byzantine Empire, or native Greek during the Middle Ages...
, rule for seven centuries, until 637 when it fell to the Islamic conquests.

The Syrian army accounted for three legions of the Roman army
Roman army
The Roman army is the generic term for the terrestrial armed forces deployed by the kingdom of Rome , the Roman Republic , the Roman Empire and its successor, the Byzantine empire...
, defending the Parthia
Parthia
Parthia is a region of north-eastern Iran, best known for having been the political and cultural base of the Arsacid dynasty, rulers of the Parthian Empire....
n border. In the 1st century, it was the Syrian army that enabled Vespasian
Vespasian
Vespasian , was Roman Emperor from 69 AD to 79 AD. Vespasian was the founder of the Flavian dynasty, which ruled the Empire for a quarter century. Vespasian was descended from a family of equestrians, who rose into the senatorial rank under the Emperors of the Julio-Claudian dynasty...
's coup. Syria was of crucial strategic importance during the crisis of the third century
Crisis of the Third Century
The Crisis of the Third Century was a period in which the Roman Empire nearly collapsed under the combined pressures of invasion, civil war, plague, and economic depression...
.

From the later 2nd century, the Roman senate
Roman Senate
The Senate of the Roman Republic was a political institution in the ancient Roman Republic, however, it was not an elected body, but one whose members were appointed by the consuls, and later by the censors. After a magistrate served his term in office, it usually was followed with automatic...
included several notable Syrians, including Claudius Pompeianus
Claudius Pompeianus
Tiberius Claudius Pompeianus was a Roman general of emperor Marcus Aurelius. He married Aurelius' daughter Lucilla and rose to the rank of senior senator in Rome before twice refusing emperorship for himself....
and Avidius Cassius
Avidius Cassius
Gaius Avidius Cassius was a Roman general and usurper who briefly ruled Egypt and Syria in 175.-Origins:He was the son of Gaius Avidius Heliodorus, a noted orator who was Prefect of Egypt from 137 to 142 under Hadrian, and wife Junia Cassia Alexandra...
. In 193, the province was divided into Syria Coele. In the 3rd century, Syrians even reached for imperial power, with the Severan dynasty
Severan dynasty
The Severan dynasty was a Roman imperial dynasty, which ruled the Roman Empire between 193 and 235. The dynasty was founded by the Roman general Septimius Severus, who rose to power during the civil war of 193, known as the Year of the Five Emperors....
. From 260 to 273, Syria was part of the breakaway Palmyrene Empire
Palmyrene Empire
The Palmyrene Empire was a splinter empire, that broke off of the Roman Empire during the Crisis of the Third Century. It encompassed the Roman provinces of Syria Palaestina, Egypt and large parts of Asia Minor....
.

Following the reforms of Diocletian
Diocletian
Diocletian |latinized]] upon his accession to Diocletian . c. 22 December 244  – 3 December 311), was a Roman Emperor from 284 to 305....
, the two provinces became part of the Diocese of Oriens. Sometime between 330 and 350 (likely ca. 341), the province of Euphratensis was created out of the territory of Syria Coele along the western bank of the Euphrates
Euphrates
The Euphrates is the longest and one of the most historically important rivers of Western Asia. Together with the Tigris, it is one of the two defining rivers of Mesopotamia...
and the former realm of Commagene, with Hierapolis
Hierapolis
Hierapolis was the ancient Greco-Roman city which sat on top of hot springs located in south western Turkey near Denizli....
as its capital. After ca. 415 Syria Coele was further subdivided into Syria I, with the capital remaining at Antioch
Antioch
Antioch on the Orontes was an ancient city on the eastern side of the Orontes River. It is near the modern city of Antakya, Turkey.Founded near the end of the 4th century BC by Seleucus I Nicator, one of Alexander the Great's generals, Antioch eventually rivaled Alexandria as the chief city of the...
, and Syria II or Salutaris, with capital at Apamea on the Orontes
Apamea (Syria)
Apamea was a treasure city and stud-depot of the Seleucid kings, was capital of Apamene, on the right bank of the Orontes River. . Its site is found about to the northwest of Hama, Syria, overlooking the Ghab valley...
. In 528, Justinian I
Justinian I
Justinian I ; , ; 483– 13 or 14 November 565), commonly known as Justinian the Great, was Byzantine Emperor from 527 to 565. During his reign, Justinian sought to revive the Empire's greatness and reconquer the lost western half of the classical Roman Empire.One of the most important figures of...
carved out the small coastal province Theodorias
Theodorias (province)
Theodorias was a Byzantine province created in 528 by Emperor Justinian I and named in honour of his wife, the Empress Theodora. It comprised a small coastal territory taken from the earlier provinces of Syria Prima and Syria Secunda. The new province remained part of the Diocese of the East. Its...
out of territory from both provinces.

The region remained one of the most important provinces of the Byzantine Empire
Byzantine Empire
The Byzantine Empire was the Eastern Roman Empire during the periods of Late Antiquity and the Middle Ages, centred on the capital of Constantinople. Known simply as the Roman Empire or Romania to its inhabitants and neighbours, the Empire was the direct continuation of the Ancient Roman State...
. It was occupied by the Sassanids between 609 and 628, then recovered by the emperor Heraclius
Heraclius
Heraclius was Byzantine Emperor from 610 to 641.He was responsible for introducing Greek as the empire's official language. His rise to power began in 608, when he and his father, Heraclius the Elder, the exarch of Africa, successfully led a revolt against the unpopular usurper Phocas.Heraclius'...
, but lost again to the advancing Muslims after the battle of Yarmouk
Battle of Yarmouk
The Battle of Yarmouk was a major battle between the Muslim Arab forces of the Rashidun Caliphate and the armies of the East Roman-Byzantine Empire. The battle consisted of a series of engagements that lasted for six days in August 636, near the Yarmouk River, along what is today the border...
and the fall of Antioch
Battle of Iron bridge
The Battle of Iron Bridge was fought between the Muslim Rashidun army and the Byzantine army in 637 AD. The battle was fought near a nine-arch stone bridge spanning the River Orontes, from which the battle took its name. The campaigns in Anatolia were undertaken after the decisive Rashidun...
.