Encyclopedia
A suspension railway is a form of elevated
Elevated railway
An elevated railway is a form of rapid transit railway with the tracks built above street level on some form of viaduct or other steel or concrete structure. The railway concerned may be constructed according to the standard gauge, narrow gauge, light rail, monorail or suspension railway system...
monorail
Monorail
A monorail is a rail-based transportation system based on a single rail, which acts as its sole support and its guideway. The term is also used variously to describe the beam of the system, or the vehicles traveling on such a beam or track...
where the vehicle is suspended from a fixed track (as opposed to a cable used in aerial tramway
Aerial tramway
An aerial tramway , cable car , ropeway or aerial tram is a type of aerial lift which uses one or two stationary ropes for support while a third moving rope provides propulsion...
s), which is built above street level, over a river or canal, or an existing railway track.

The British engineer Henry Robinson Palmer
Henry Robinson Palmer
Henry Robinson Palmer was a British civil engineer who designed the world's first monorail system and the first elevated railsystem...
(1795–1844) filed a patent application for a horse-drawn suspended single-rail system in 1821, and constructed a demonstration at Woolwich Arsenal
Royal Arsenal
The Royal Arsenal, Woolwich, originally known as the Woolwich Warren, carried out armaments manufacture, ammunition proofing and explosives research for the British armed forces. It was sited on the south bank of the River Thames in Woolwich in south-east London, England.-Early history:The Warren...
soon afterwards.

German industrial pioneer, thinker and politician Friedrich Harkort built a demonstration track of Palmers' system in 1826, in Elberfeld, Germany, at the time commercial centre of the early industrial area Wupper
Wupper
The Wupper is a right tributary to the Rhine river in the state of North Rhine-Westphalia, Germany. Rising near Marienheide in western Sauerland it runs through the mountainous area of the Bergisches Land Berg County and enters the Rhine at Leverkussen, south of Düsseldorf...
Valley. The steelmill owner had the vision of a coal-carrier railway between Wupper Valley and the nearby coal-mining region of Ruhr
Ruhr
The Ruhr is a medium-size river in western Germany , a right tributary of the Rhine.-Description:The source of the Ruhr is near the town of Winterberg in the mountainous Sauerland region, at an elevation of approximately 2,200 feet...
, which would connect his own factories in Elberfeld and Deilbachtal. Due to protests from mill owners that were not integrated along the line and from the transporting branch, this idea could not be executed.

The first suspended railway was opened at Cheshunt
Cheshunt
Cheshunt is a town in Hertfordshire, England with a population of around 52,000 according to the United Kingdom's 2001 Census. It is a dormitory town and part of the Greater London Urban Area and London commuter belt served by Cheshunt railway station...
on June 25, 1825 using Palmer's patent. It was actually built to carry bricks, but as an opening stunt it carried passengers, in doing so writing monorail history

A work, Description of the suspension railway invented by Maxwell Dick: with engravings By Maxwell Dick, published in Irvine, Scotland
Irvine, North Ayrshire
Irvine is a new town on the coast of the Firth of Clyde in North Ayrshire, Scotland. According to 2007 population estimates, the town is home to 39,527 inhabitants, making it the biggest settlement in North Ayrshire....
. in 1830, refers to an Aerial tramway
Aerial tramway
An aerial tramway , cable car , ropeway or aerial tram is a type of aerial lift which uses one or two stationary ropes for support while a third moving rope provides propulsion...
/cable car system.

The Enos Electric Railway, an electric powered monorail with wagons suspended from an elevated frame of open steelwork, was demonstrated in the grounds of the Daft
Leo Daft
Leo Daft was an English professor and builder of early American urban railroads.He led the construction of an electrical railroad in Newark, New Jersey, in 1883, of the Baltimore and Hampden Electric Railway in the Hampden neighborhood of Baltimore in 1885, and of the Los Angeles Electric...
Electric Company in Greenville
Greenville, Jersey City
Greenville is the southernmost section of Jersey City, New Jersey.In its broadest definition Greenville encompasses the area south of the West Side Branch of Hudson-Bergen Light Rail and north of the city line with Bayonne, between the Upper New York Bay and the Newark Bay, and corresponds to the...
, New Jersey in 1886. It was built out of lightweight steel construction and had a great performance, but to circumstances unclear till now, was never expanded.

The design of the rail-frame appears to have influenced Eugen Langen, or his mechanicians in designing the first elevated tramwaz, as his Wuppertal Schwebebahn framing bear a remarkable likeness to the Enos construction.

During the 1880s the German businessman and engineer Eugen Langen
Eugen Langen
Eugen Langen was a German entrepreneur, engineer and inventor, involved in the development of the petrol engine and the Wuppertal monorail. In 1857 he worked in his father's sugar factory, JJ Langen & Söhne, after an extensive technical training at the Polytechnic institute in Karlsruhe.-Otto and...
experimented in his Cologne sugar factory with a low leveled one-track suspension railway system for the transportation of raw materials. He was a business partner of Nicolaus Otto
Nicolaus Otto
Nikolaus August Otto was the German inventor of the first internal-combustion engine to efficiently burn fuel directly in a piston chamber. Although other internal combustion engines had been invented these were not based on four separate strokes...
, the inventor of the internal-combustion engine, and probably knew the Palmer Railway. In the nearby expanding industrial zone of Wupper Valley, entrepreneurs and governors were looking for a modern urban transportation system. A cooperation of politicians and businessmen from the Barmen-Elberfeld industrial area around 1890 ordered from the factory of Otto and Langen, now Deutz, an electric powered elevated railway system. The official name was Anlage einer elektrischen Hochbahn (Schwebebahn), System Eugen Langen Köln or Electrical Elevated Railroad (Floating tram) Installation, System Eugen Langen Cologne.

The installation and stations were built by three companies, among them the company of Friedrich Harkort. In 1901 the first track of the Wuppertal Schwebebahn opened, in 1903 it was extended to the final length of 13,3 kilometers. This system is still in operation as a normal means of public transport, moving over 20 million passengers each year.

A system of the same type, but much shorter, and the wagons being moved by a cable, powered from the mountain station, opened in Dresden, 1901.

A unique demonstration electrically powered suspension line
Bennie Railplane
The Bennie Railplane was a form of rail transport invented by George Bennie , which moved along an overhead rail by way of propellers. Despite superficial appearances, it was not a monorail, as it used both an overhead running rail and a guide rail below...
was built by the Scottish engineer George Bennie near Glasgow
Glasgow
Glasgow is the largest city in Scotland and third most populous in the United Kingdom. The city is situated on the River Clyde in the country's west central lowlands...
. Two propellers delivered 240 hp in a short burst for acceleration to the cruise speed of 160 km/h. It was not a true monorail as it used an overhead running rail and a guide rail below.

In 1947, Lucien Chadenson became interested in the Bennie Railplane experimental line, and the Paris Metro Route 11, which uses rubber tyres. A test track operated in Chateauneuf
Châteauneuf
Places in France known as Châteauneuf:* Châteauneuf, Côte-d'Or* Châteauneuf, Loire* Châteauneuf, Saône-et-Loire* Châteauneuf, Savoie* Châteauneuf, Vendée-See also:Places in France known as Châteauneuf:* Châteauneuf, Côte-d'Or...
, south of Paris from 1958, but attracted no further interest in France. However, the Japanese have built two successful Safege
SAFEGE
SAFEGE is an acronym for the French consortium Société Anonyme Française d' Etude de Gestion et d' Entreprises and is pronounced SAY-fij in English....
lines, the Siemens Company of Germany has developed a smaller scale system similar to the SAFEGE Monorail. and Aerorail of Texas and Sky Train of Florida are promoting steel-wheel versions of SAFEGE as well.

Japan would later adopt the Alweg and Safege monorail systems and build more transit monorails than any other country in the world. 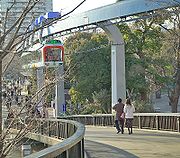 The Chiba Urban Monorail of Japan
Japan
Japan is an island nation in East Asia. Located in the Pacific Ocean, it lies to the east of the Sea of Japan, China, North Korea, South Korea and Russia, stretching from the Sea of Okhotsk in the north to the East China Sea and Taiwan in the south...
is the world's largest suspension railway, owned and operated by Chiba Urban Monorail Co., Ltd, established on March 20, 1979.

Two further H-Bahn
H-Bahn
The H-Bahn in Dortmund and Düsseldorf is a suspended, driverless passenger monorail system. The system has been developed by Siemens, who call the project SIPEM ....
suspension railways were built in Germany
Germany
Germany , officially the Federal Republic of Germany , is a federal parliamentary republic in Europe. The country consists of 16 states while the capital and largest city is Berlin. Germany covers an area of 357,021 km2 and has a largely temperate seasonal climate...
in 1975, at Dortmund
Dortmund
Dortmund is a city in Germany. It is located in the Bundesland of North Rhine-Westphalia, in the Ruhr area. Its population of 585,045 makes it the 7th largest city in Germany and the 34th largest in the European Union....
and Düsseldorf airport. The Memphis Suspension Railway
Memphis Suspension Railway
The Memphis Suspension Railway or Mud Island Monorail is a suspended monorail that connects the city center of Memphis with the entertainment park on Mud Island...
was opened in 1982.

The Skybus Metro is a modern suspended railway invented by Indian technologist Mr B Rajaram. The system consists of an elevated track with the cars suspended below the track, like the Wuppertal Schwebebahn or H-Bahn systems in Germany. A 1.6 kilometre (0.994196378639691 mi) test track in Margao
Margao
Margao and commercial capital of the Indian state of Goa. It is the administrative headquarters of South Goa district and of the Salcete taluka.- Etymology :...
, Goa started trials in 2004, but on September 25, one employee was killed and three injured in an accident. After this, all development of the project stopped. However, Mr B Rajaram has defended the mode of transport, as he believes the accident was avoidable.
The source of this article is wikipedia, the free encyclopedia.  The text of this article is licensed under the GFDL.