On its course of about 113 km the Wupper traverses the city of Wuppertal
Wuppertal
Wuppertal is a city in North Rhine-Westphalia, Germany. It is located in and around the Wupper river valley, and is situated east of the city of Düsseldorf and south of the Ruhr area. With a population of approximately 350,000, it is the largest city in the Bergisches Land...
where the Schwebebahn
Schwebebahn Wuppertal
- Current modernisation :The Wuppertal Schwebebahn nowadays carries up to 82,000 passengers a day through the city. Since 1997, the supporting frame has been largely modernised, and a lot of stations have been reconstructed and brought technically up to date...
or floating tramway for 10 kilometers runs over the river. According to a popular local story, on 21 July 1950 a young elephant named Tuffi
Tuffi
Tuffi was a female circus elephant that became famous in Germany in 1950 when she jumped from the suspended monorail in Wuppertal into the river below....
jumped into the Wupper from the Schwebebahn. 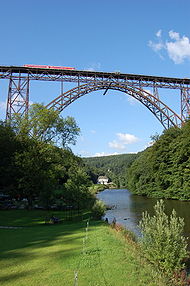 From the 15th century on, the Wupper and its many rivulets and creeks gave birth to hundreds of workshops, mills and factories alongside their streams. First using the water to dye, bleach and wash canvas and cloth, later using the water to power machines, or to transport waste.

With this the Wupper enabled an industrial expansion of the Wuppertal or Wupper Valley during the 18th, 19th and early 20th century, similar to that of Silicon Valley today. Wupper Valley is one of world's first industrialized regions and empowered a.o. the Ruhrgebiet
Ruhr
The Ruhr is a medium-size river in western Germany , a right tributary of the Rhine.-Description:The source of the Ruhr is near the town of Winterberg in the mountainous Sauerland region, at an elevation of approximately 2,200 feet...
. 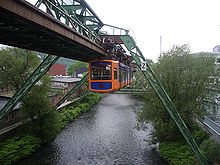