Judges of the Supreme Court are appointed by the President of Ireland
President of Ireland
The President of Ireland is the head of state of Ireland. The President is usually directly elected by the people for seven years, and can be elected for a maximum of two terms. The presidency is largely a ceremonial office, but the President does exercise certain limited powers with absolute...
in accordance with the binding advice
Advice (constitutional)
Advice, in constitutional law, is formal, usually binding, instruction given by one constitutional officer of state to another. Especially in parliamentary systems of government, Heads of state often act on the basis of advice issued by prime ministers or other government ministers...
of the Government (cabinet), who, since 1995, act in turn on the non-binding advice of a judicial advisory board.

Under the Courts and Court Officers Act, 1995 the retirement age of ordinary judges of the Supreme Court was reduced from 72 years to 70 years. Judges appointed prior to the coming into operation of that Act may continue in office until aged 72. The Courts (No. 2) Act, 1997 limited the term of office of a person appointed to the post of Chief Justice after the coming into operation of the Act to a period of seven years. A former Chief Justice may continue as a member of the Court until he or she reaches the statutory retirement age.

The Supreme Court only has original jurisdiction
Original jurisdiction
The original jurisdiction of a court is the power to hear a case for the first time, as opposed to appellate jurisdiction, when a court has the power to review a lower court's decision.-France:...
in two cases. This is when a Bill is referred to it by the President
President of Ireland
The President of Ireland is the head of state of Ireland. The President is usually directly elected by the people for seven years, and can be elected for a maximum of two terms. The presidency is largely a ceremonial office, but the President does exercise certain limited powers with absolute...
for an opinion on its constitutionality before promulgation
Promulgation
Promulgation is the act of formally proclaiming or declaring a new statutory or administrative law after its enactment. In some jurisdictions this additional step is necessary before the law can take effect....
under Article 26 of the Constitution or when the court must determine under Article 12 of the Constitution whether the President has become incapacitated.

The Supreme Court has little discretion to determine which cases it hears as requirements to seek the leave of either the trial court or the Supreme Court itself before an appeal may be brought are rare. 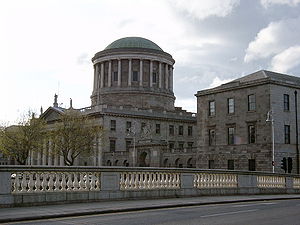 After a slow start in its first two decades of the Constitution, the Supreme Court has expounded a significant constitutional jurisprudence. This slow start was partly because, prior to 1922, the whole of Ireland
Ireland
Ireland is an island to the northwest of continental Europe. It is the third-largest island in Europe and the twentieth-largest island on Earth...
was a part of the United Kingdom
United Kingdom
The United Kingdom of Great Britain and Northern IrelandIn the United Kingdom and Dependencies, other languages have been officially recognised as legitimate autochthonous languages under the European Charter for Regional or Minority Languages...
, and Supreme Court judges had been trained in British jurisprudence, which stresses the sovereignty of parliament
Parliamentary sovereignty
Parliamentary sovereignty is a concept in the constitutional law of some parliamentary democracies. In the concept of parliamentary sovereignty, a legislative body has absolute sovereignty, meaning it is supreme to all other government institutions—including any executive or judicial bodies...
and deference to the legislature
Legislature
A legislature is a kind of deliberative assembly with the power to pass, amend, and repeal laws. The law created by a legislature is called legislation or statutory law. In addition to enacting laws, legislatures usually have exclusive authority to raise or lower taxes and adopt the budget and...
. It was also the case that under the 1922 Constitution there was a right of appeal to the Privy Council
Privy council
A privy council is a body that advises the head of state of a nation, typically, but not always, in the context of a monarchic government. The word "privy" means "private" or "secret"; thus, a privy council was originally a committee of the monarch's closest advisors to give confidential advice on...
which was exercised on a number of occasions. Nonetheless from the 1960s onwards the Court has made a number of significant decisions. It has, for example:

Supreme Court decisions cannot be appealed, as such, to either court. The ECJ hears cases referred to it by the Irish Courts by way of Case Stated
Case Stated
Case stated is an appeal mechanism, a legal function, available in England and Wales to review a magistrates' court decision on a point of law. It is a statement of facts prepared by one court for the opinion of another on a point of law....
and while unsuccessful litigants before the Supreme Court can apply to the ECHR, the latter court's decision does not have the effect of voiding the Supreme Court's decision. Decisions of the ECHR do not automatically override Irish law and may require legislation or perhaps even a constitutional referendum to be implemented in full.