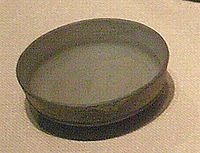 was a blue-gray form of high-fired pottery
Pottery
Pottery is the material from which the potteryware is made, of which major types include earthenware, stoneware and porcelain. The place where such wares are made is also called a pottery . Pottery also refers to the art or craft of the potter or the manufacture of pottery...
which was produced in Japan
Japan
Japan is an island nation in East Asia. Located in the Pacific Ocean, it lies to the east of the Sea of Japan, China, North Korea, South Korea and Russia, stretching from the Sea of Okhotsk in the north to the East China Sea and Taiwan in the south...
and southern Korea
Korea
Korea ) is an East Asian geographic region that is currently divided into two separate sovereign states — North Korea and South Korea. Located on the Korean Peninsula, Korea is bordered by the People's Republic of China to the northwest, Russia to the northeast, and is separated from Japan to the...
during the Kofun
Kofun period
The is an era in the history of Japan from around 250 to 538. It follows the Yayoi period. The word kofun is Japanese for the type of burial mounds dating from this era. The Kofun and the subsequent Asuka periods are sometimes referred to collectively as the Yamato period...
, Nara
Nara period
The of the history of Japan covers the years from AD 710 to 794. Empress Gemmei established the capital of Heijō-kyō . Except for 5 years , when the capital was briefly moved again, it remained the capital of Japanese civilization until Emperor Kammu established a new capital, Nagaoka-kyō, in 784...
, and Heian
Heian period
The is the last division of classical Japanese history, running from 794 to 1185. The period is named after the capital city of Heian-kyō, or modern Kyōto. It is the period in Japanese history when Buddhism, Taoism and other Chinese influences were at their height...
periods of Japanese history. It was initially used for funerary and ritual objects, and originated from a Korean stoneware style known as “Kaya ware”. Although the roots of Sueki reach back to ancient China
China
Chinese civilization may refer to:* China for more general discussion of the country.* Chinese culture* Greater China, the transnational community of ethnic Chinese.* History of China* Sinosphere, the area historically affected by Chinese culture...
, its direct precursor is the grayware of the Three Kingdoms of Korea
Three Kingdoms of Korea
The Three Kingdoms of Korea refer to the ancient Korean kingdoms of Goguryeo, Baekje and Silla, which dominated the Korean peninsula and parts of Manchuria for much of the 1st millennium...
.

The term “Sue ware” was coined in the 1950s from a reference to vessels mentioned in the 8th century Japanese classical poetry anthology
Japanese poetry
Japanese poets first encountered Chinese poetry during the Tang Dynasty. It took them several hundred years to digest the foreign impact, make it a part of their culture and merge it with their literary tradition in their mother tongue, and begin to develop the diversity of their native poetry. For...
Man'yōshū. Previous to this, the terms or Chosen doki were in more common use.

Sue ware is believed to have originated in the 5th or 6th century in the Kaya
Gaya confederacy
Gaya was a confederacy of territorial polities in the Nakdong River basin of southern Korea, growing out of the Byeonhan confederacy of the Samhan period.The traditional period used by historians for Gaya chronology is 42–532 CE...
region of southern Korea, and was brought to Japan by immigrant craftsmen. It was contemporary with the native Japanese Haji ware
Haji ware
is a type of plain, unglazed, reddish-brown Japanese pottery or earthenware that was produced during the Kofun, Nara, and Heian periods of Japanese history. It was used for both ritual and utilitarian purposes, and many examples have been found in Japanese tombs, where they form part of the basis...
, which was more porous and reddish in color. Sue ware was made from coils of clay
Clay
Clay is a general term including many combinations of one or more clay minerals with traces of metal oxides and organic matter. Geologic clay deposits are mostly composed of phyllosilicate minerals containing variable amounts of water trapped in the mineral structure.- Formation :Clay minerals...
, beaten and smoothed or carved into shape, and then fired in an oxygen-reduction atmosphere of over 1000 deg C. The resulting stoneware
Stoneware
Stoneware is a vitreous or semi-vitreous ceramic ware with a fine texture. Stoneware is made from clay that is then fired in a kiln, whether by an artisan to make homeware, or in an industrial kiln for mass-produced or specialty products...
was generally unglazed, but sometimes displays an accidental partial covering of ash glaze
Ash glaze
Ash glazes are ceramic glazes which were formulated from wood-ash .-Appearance:The glaze has glasslike and pooling characteristics which puts emphasis on the surface texture of the piece being glazed. When the glaze is mostly made up of ash, the final result is mostly dark brown to green. The pots...
, which melted in drips onto the ceramic pieces' surfaces as they were being fired.

Sue ware was produced in numerous locations around Japan, including southern Osaka prefecture
Osaka Prefecture
is a prefecture located in the Kansai region on Honshū, the main island of Japan. The capital is the city of Osaka. It is the center of Osaka-Kobe-Kyoto area.- History :...
, along the coast of the Inland Sea and parts of eastern Honshū
Honshu
is the largest island of Japan. The nation's main island, it is south of Hokkaido across the Tsugaru Strait, north of Shikoku across the Inland Sea, and northeast of Kyushu across the Kanmon Strait...
. It was used for the roof tiles of the Kokubunji system of Provincial temple
Provincial temple
Emperor Shōmu of Japan established so-called provincial temples in each province of Japan...
s erected in the Nara period. By the end of early 7th century, its position as an elite product was eroded by mass production, and by the imports of the new three-color ceramics
Sancai
Sancai is a type of ceramics using three intermingled colors for decoration.-Technique:The body of Sancai ceramics was made of white clay, coated with a layer of glaze, and fired at a temperature of 800 degrees Celsius. Sancai is a type of lead-glazed pottery: lead oxide was the principal flux in...
from Tang China
Tang Dynasty
The Tang Dynasty was an imperial dynasty of China preceded by the Sui Dynasty and followed by the Five Dynasties and Ten Kingdoms Period. It was founded by the Li family, who seized power during the decline and collapse of the Sui Empire...
. By the Heian period, Sue ware had become a utilitarian pottery, and it became the ancestor of a number of regional ceramics.
The source of this article is wikipedia, the free encyclopedia.  The text of this article is licensed under the GFDL.