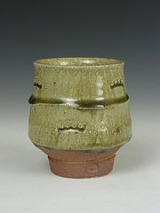 Encyclopedia
Ash glazes are ceramic glazes which were formulated from wood-ash . 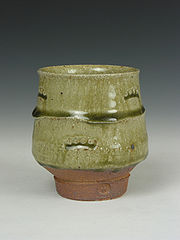 The glaze has glasslike and pooling (the builds up of glaze) characteristics which puts emphasis on the surface texture of the piece being glazed. When the glaze is mostly made up of ash, the final result is mostly dark brown to green. The pots with these glazes resemble the earth in color and texture. As the ash percentage decreases, the artist has more control on the color and the final glaze color differs from light to dark shades of brown or green.

Ash glazing began around 1500 BC, during the Shang Dynasty, in China. Around 1000 BC, the Chinese realized that the ash was covering the piece so they started adding the ash as a glaze before the pot went into the kiln
Kiln
A kiln is a thermally insulated chamber, or oven, in which a controlled temperature regime is produced. Uses include the hardening, burning or drying of materials...
(an oven-like structure used to turn the ceramic
Ceramic
A ceramic is an inorganic, nonmetallic solid prepared by the action of heat and subsequent cooling. Ceramic materials may have a crystalline or partly crystalline structure, or may be amorphous...
piece into its usable form). Ash glaze was one of the first glazes used and contained only ash, clay, and water.

Current ash glazes usually contain less than 50% wood ash
Wood ash
Wood ash is the residue powder left after the combustion of wood. Main producers of wood ash are wood industries and power plants.-Composition:...
compared to before when the majority of the glaze was ash. The decrease in ash percentage is to give the artist some control over the chemical make up and result of the glaze. Currently, ash glazes are mostly used by artists as a decorative tool, but some still use ash glaze ware. In Korea, the traditional ash glaze composed of only ash and water is used to make functional pottery such as bowls, cups, and teapots. Koreans believe using ash glazed ceramic ware is dramatically safer than using plastic ware because of its lack of carcinogens, cancer causing materials.

To create the ash, the wood needs to burn completely in a kiln. Wood-ash is around 1% the mass of the original wood; therefore, a lot of wood is necessary to produce the ash. The ash is then put through a sieve
Sieve
A sieve, or sifter, separates wanted elements from unwanted material using a woven screen such as a mesh or net. However, in cooking, especially with flour, a sifter is used to aerate the substance, among other things. A strainer is a type of sieve typically used to separate a solid from a liquid...
, a meshed tool, to eliminate the excess clumps from the ash. At this point artists can process the ash further to create a more uniform mixture or leave it unprocessed so there are more random final result. To process the ash, water is first added to the mixture and left to settle for a couple hours. The solution is drained and dried and the result is ash containing less harmful chemicals like some soluble alkalis.

Wood ash is primarily made up of calcium carbonate, which is used in many glaze recipes. The ash also contains potassium carbonate, phosphates, and other metals; however, the ratio of these chemicals depend on the location, soil, and type of wood the ash came from. The different chemical compositions make the glaze to produce different results from batch to batch. Furthermore, two pieces with the same glaze batch can even have different results. If the ash its not cleaned or mixed thoroughly, some parts of the glaze mixture can have more of one chemical and others could have more of another making each part of the glaze to actually have varying concentrations of chemicals.