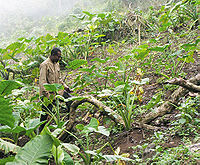 Subsistence agriculture is self-sufficiency
Self-sufficiency
Self-sufficiency refers to the state of not requiring any outside aid, support, or interaction, for survival; it is therefore a type of personal or collective autonomy...
farming in which the farmers focus on growing enough food to feed their families. The typical subsistence farm has a range of crops and animals needed by the family to eat and clothe themselves during the year. Planting decisions are made with an eye toward what the family will need during the coming year, rather than market prices. Tony Waters writes: "Subsistence peasants are people who grow what they eat, build their own houses, and live without regularly making purchases in the marketplace."

Subsistence grain-growing agriculture (predominantly wheat
Wheat
Wheat is a cereal grain, originally from the Levant region of the Near East, but now cultivated worldwide. In 2007 world production of wheat was 607 million tons, making it the third most-produced cereal after maize and rice...
and barley
Barley
Barley is a major cereal grain, a member of the grass family. It serves as a major animal fodder, as a base malt for beer and certain distilled beverages, and as a component of various health foods...
) first emerged during the Neolithic Revolution
Neolithic Revolution
The Neolithic Revolution was the first agricultural revolution. It was the transition from hunting and gathering to agriculture and settlement. Archaeological data indicates that various forms of plants and animal domestication evolved independently in 6 separate locations worldwide circa...
when humans began to settle in the Nile
Nile
The Nile is a major north-flowing river in North Africa, generally regarded as the longest river in the world. It is long. It runs through the ten countries of Sudan, South Sudan, Burundi, Rwanda, Democratic Republic of the Congo, Tanzania, Kenya, Ethiopia, Uganda and Egypt.The Nile has two major...
, Euphrates
Euphrates
The Euphrates is the longest and one of the most historically important rivers of Western Asia. Together with the Tigris, it is one of the two defining rivers of Mesopotamia...
, and Indus River
Indus River
The Indus River is a major river which flows through Pakistan. It also has courses through China and India.Originating in the Tibetan plateau of western China in the vicinity of Lake Mansarovar in Tibet Autonomous Region, the river runs a course through the Ladakh district of Jammu and Kashmir and...
Valleys. Subsistence agriculture also emerged independently in Mexico where it was based on maize cultivation, and the Andes where it was based on the domestication of the potato. Subsistence agriculture was the dominant mode of production in the world until recently, when market-based capitalism
Capitalism
Capitalism is an economic system that became dominant in the Western world following the demise of feudalism. There is no consensus on the precise definition nor on how the term should be used as a historical category...
became widespread. Subsistence horticulture
Horticulture
Horticulture is the industry and science of plant cultivation including the process of preparing soil for the planting of seeds, tubers, or cuttings. Horticulturists work and conduct research in the disciplines of plant propagation and cultivation, crop production, plant breeding and genetic...
may have developed independently in South East Asia and Papua New Guinea
Papua New Guinea
Papua New Guinea , officially the Independent State of Papua New Guinea, is a country in Oceania, occupying the eastern half of the island of New Guinea and numerous offshore islands...
.


Shifting agriculture
Shifting cultivation
Shifting cultivation is an agricultural system in which plots of land are cultivated temporarily, then abandoned. This system often involves clearing of a piece of land followed by several years of wood harvesting or farming, until the soil loses fertility...
('slash and burn' or Jhooming)

In this type of agriculture, a patch of forest land is cleared by a combination of felling and burning, and crops are grown. After 2-3 years the fertility of the soil begins to decline, the land is abandoned and the farmer moves to clear a fresh piece of land elsewhere in the forest and the process continues. While the land is left fallow the forest regrows in the cleared area and soil fertility and biomass is restored. After a decade or more, the farmer may return to the first piece of land. This form of agriculture is sustainable at low population densities, but higher population loads require more frequent clearing which prevents soil fertility from recovering, opens up more of the forest canopy, and encourages scrub at the expense of large trees, eventually resulting in deforestation and heavy erosion.

In this type of farming people migrate along with their animals from one place to another in search of fodder for their animals. Generally they rear cattle, sheep, goats, camels and/or yaks for milk, skin, meat and wool. This way of life is common in parts of central and western asia, India, east and south-west africa and northern eurasia. Bhotiyas and gujjars are the nomadic tribes of himalayas.

In very densely populated countries like India and China, farmers use their small land holding to produce enough for their own consumption, while the little remaining produce is used for exchange against other goods. These farmers try to obtain maximum yield from the available lands by intensifying cultivation techniques, including the preparation of paddy fields
Paddy field
A paddy field is a flooded parcel of arable land used for growing rice and other semiaquatic crops. Paddy fields are a typical feature of rice farming in east, south and southeast Asia. Paddies can be built into steep hillsides as terraces and adjacent to depressed or steeply sloped features such...
which can be used year after year. In the most intensive situation, farmers may even create terraces along steep hillsides to cultivate rice paddy. Such fields are found in densely populated parts of Asia, most famously in The Philippines. They may also intensify by using manure, artificial irrigation and animal waste as fertilizer.

In the soviet union the Scissor Crisis of 1923 led to subsistence farming. This caused some to worry about the possibility of a famine among those in cities.