Encyclopedia
Hokkaido Prefecture
Hokkaido
, formerly known as Ezo, Yezo, Yeso, or Yesso, is Japan's second largest island; it is also the largest and northernmost of Japan's 47 prefectural-level subdivisions. The Tsugaru Strait separates Hokkaido from Honshu, although the two islands are connected by the underwater railway Seikan Tunnel...
had 14 branch offices called 支庁 (shichō) in Japanese, which is often translated in English as subprefectures. Normally, a subprefecture consists of a few to a dozen cities, towns, and/or villages.

For historical reasons, some older people in Hokkaido use the subprefecture name suffixed by -kannai in their address.


History of shichō in Hokkaido

Today, fourteen shichō effectively cover all of Hokkaido. Technically, the shichō cover only towns and villages, although some commissioned business is conducted for cities. 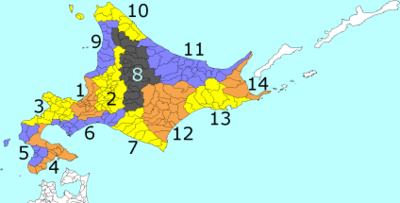 Numbers are those of the map above.

Japan claims the southern part of Kuril Islands
Kuril Islands
The Kuril Islands , in Russia's Sakhalin Oblast region, form a volcanic archipelago that stretches approximately northeast from Hokkaidō, Japan, to Kamchatka, Russia, separating the Sea of Okhotsk from the North Pacific Ocean. There are 56 islands and many more minor rocks. It consists of Greater...
(Northern Territories
Kuril Islands dispute
The Kuril Islands dispute , also known as the , is a dispute between Japan and Russia over sovereignty over the South Kuril Islands. The disputed islands, which were occupied by Soviet forces during the Manchurian Strategic Offensive Operation at the end of World War II, are under Russian...
), currently administered by Russia, belong to Nemuro Subprefecture. However, the table above excludes these islands' data.