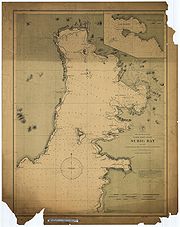 Subic Bay is a bay
Headlands and bays
Headlands and bays are two related features of the coastal environment.- Geology and geography :Headlands and bays are often found on the same coastline. A bay is surrounded by land on three sides, whereas a headland is surrounded by water on three sides. Headlands are characterized by high,...
forming part of Luzon Sea on the west coast of the island of Luzon
Luzon
Luzon is the largest island in the Philippines. It is located in the northernmost region of the archipelago, and is also the name for one of the three primary island groups in the country centered on the Island of Luzon...
in Zambales
Zambales
Zambales is a province of the Philippines located in the Central Luzon region. Its capital is Iba. Zambales borders Pangasinan to the north, Tarlac and Pampanga to the east, and Bataan to the south. The province lies between the South China Sea and the Zambales Mountains. With a land area of...
, Philippines
Philippines
The Philippines , officially known as the Republic of the Philippines , is a country in Southeast Asia in the western Pacific Ocean. To its north across the Luzon Strait lies Taiwan. West across the South China Sea sits Vietnam...
, about 100 kilometers northwest of Manila Bay
Manila Bay
Manila Bay is a natural harbor which serves the Port of Manila , in the Philippines.The bay is considered to be one of the best natural harbors in Southeast Asia and one of the finest in the world...
. Its shores were formerly the site of a major United States Navy
United States Navy
The United States Navy is the naval warfare service branch of the United States Armed Forces and one of the seven uniformed services of the United States. The U.S. Navy is the largest in the world; its battle fleet tonnage is greater than that of the next 13 largest navies combined. The U.S...
facility named U.S. Naval Base Subic Bay
U.S. Naval Base Subic Bay
U.S. Naval Base Subic Bay was a major ship-repair, supply, and rest and recreation facility of the United States Navy located in Zambales, Philippines. It was the largest U.S...
, it is now the location of an industrial and commercial area known as the Subic Bay Freeport Zone
Subic Bay Freeport Zone
Subic Bay Freeport Zone , which is known simply as Subic Bay, is the Philippines' first success case of a into a tax- and duty-free zone similar to Hong Kong and Singapore, operated and managed by the Subic Bay Metropolitan Authority or SBMA. It covers the fenced area of the former U.S...
under the Subic Bay Metropolitan Authority
Subic Bay Metropolitan Authority
The Subic Bay Freeport or what was the former US Naval facility in Subic Bay into a self-sustaining tourism, industrial, commercial, financial, and investment center to generate employment opportunities .-History:...
(see also, Port of Subic
Port of Subic
The Port of Subic, Subic, Zambales, Philippines, is located in the vicinity of Subic Bay, One of the Philippines Finest harbours and most strategically based...
).

The majority of the wrecks in Subic Bay are a result of either the Spanish–American War in 1898 or of World War II
World War II
World War II, or the Second World War , was a global conflict lasting from 1939 to 1945, involving most of the world's nations—including all of the great powers—eventually forming two opposing military alliances: the Allies and the Axis...
, where a number of Japan
Japan
Japan is an island nation in East Asia. Located in the Pacific Ocean, it lies to the east of the Sea of Japan, China, North Korea, South Korea and Russia, stretching from the Sea of Okhotsk in the north to the East China Sea and Taiwan in the south...
ese vessels were sunk by American aircraft.

El Capitan was a freighter of nearly 3,000 tons just under 130 meters long. She sank in Subic Bay where she rests on a sloping bottom.

Hell ship
Hell Ship
A hell ship is a ship with extremely unpleasant living conditions or with a reputation for cruelty among the crew. It now generally refers to the ships used by the Imperial Japanese Navy to transport Allied prisoners of war out of the Philippines, Hong Kong and Singapore during World War II. The...
Oryoku Maru
Oryoku Maru
was a Japanese passenger cargo ship. In World War II, Oryoku Maru was used as a troop transport and prisoners of war transport ship . She left Manila on December 13, 1944, with 1620 POWs, mostly American, packed in the holds. 1900 Japanese civilians & military personnel occupied the cabins...
: On 15 December 1944, she had 1,619 American and British prisoners of war
Prisoner of war
A prisoner of war or enemy prisoner of war is a person, whether civilian or combatant, who is held in custody by an enemy power during or immediately after an armed conflict...
on board when she was sunk, under heavy bombardment by American fighters while on her way from Subic Bay to Japan. She was less than half a kilometer off the Alava Pier when attacked. About 300 prisoners died during the short voyage from Manila and during the attack.

Seian Maru: During an air raid on Subic Bay, the 3,712 ton freighter Seian Maru was bombed and sunk. This was only four days after the sinking of the Oryoku Maru on 19 December 1944.

LST (Landing Ship, Tank) This is one of the large LSTs that litter the floor of Subic Bay. She was scuttled in 1946 in the middle of Subic Bay between the southern tip of the runway and Grande Island
Fort Wint
Fort Wint was part of the harbor defenses of Manila and Subic Bays built by the Philippine Department of the United States Army between 1907 and 1920 in response to recommendations of the Taft Board prior to the non-fortification clause of the Washington Naval Treaty...
.

The old , which had been renamed the USS Rochester (CA-2) in 1917. At the onset of the Japanese invasion of the Philippines, this ship was acting as a floating workshop and storehouse. Already decommissioned, the armored hull of the old cruiser
Cruiser
A cruiser is a type of warship. The term has been in use for several hundreds of years, and has had different meanings throughout this period...
was too valuable to allowed to be captured, and so she was scuttled in December 1941 by American forces.

San Quentin: During the Spanish–American war in 1898, the Spanish scuttled their San Quentin in the hope of blocking the passage between Grande Island and Chiquita Islands near the mouth of Subic Bay.