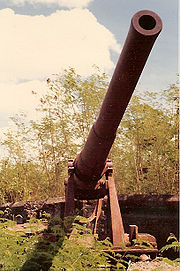 Primary armament was Buffington-Crozier disappearing gun
Disappearing gun
A disappearing gun is a type of heavy artillery for which the gun carriage enabled the gun to rotate backwards and down into a pit protected by a wall or a bunker after it was fired...
s of the Endicott period. These guns recoiled down into a protected and concealed loading position, and were then re-elevated for firing by counterweighted lever arms. Fort Wint was less damaged by Japanese artillery fire than other fortifications around the Bataan Peninsula
Bataan Peninsula
The Bataan Peninsula is a rocky extension of the Zambales Mountains, on Luzon in the Philippines. It separates the Manila Bay from the South China Sea...
. Two 10-inch (25-cm) disappearing guns were dismantled by the United States Navy
United States Navy
The United States Navy is the naval warfare service branch of the United States Armed Forces and one of the seven uniformed services of the United States. The U.S. Navy is the largest in the world; its battle fleet tonnage is greater than that of the next 13 largest navies combined. The U.S...
in the 1960s and shipped to Fort Casey
Fort Casey
Fort Casey State Park is located on Whidbey Island in Washington state. Admiralty Inlet was considered so strategic to the defense of Puget Sound in the 1890s that three forts, Fort Casey on Whidbey Island, Fort Flagler on Marrowstone Island, and Fort Worden at Port Townsend, were built at the...
for renovation and display. The 6-inch (15-cm) disappearing guns pictured here (2 batteries of 2 each) remained at Fort Wint into the 1980s.