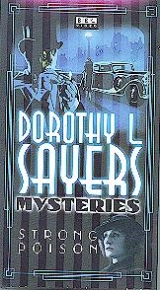 It is in Strong Poison that Lord Peter first meets Harriet Vane
Harriet Vane
Harriet Deborah Vane, later Lady Peter Wimsey, is a fictional character in the works of British writer Dorothy L. Sayers ....
, an author of police fiction. The immediate problem is that she is on trial for her life, charged with murdering her former lover. If Lord Peter does not prove she is innocent, he will lose her before he even persuades her to accept his proposal of marriage. But all the clues point to Harriet as the one who gave Philip Boyes the arsenic
Arsenic
Arsenic is a chemical element with the symbol As, atomic number 33 and relative atomic mass 74.92. Arsenic occurs in many minerals, usually in conjunction with sulfur and metals, and also as a pure elemental crystal. It was first documented by Albertus Magnus in 1250.Arsenic is a metalloid...
that killed him.


Explanation of the novel's title

The title is derived from a phrase in some variants of the ballad
Ballad
A ballad is a form of verse, often a narrative set to music. Ballads were particularly characteristic of British and Irish popular poetry and song from the later medieval period until the 19th century and used extensively across Europe and later the Americas, Australia and North Africa. Many...
Lord Randall
Lord Randall
"Lord Randall", or "Lord Randal", is an Anglo-Scottish border ballad, a traditional ballad consisting of dialogue. The different versions follow the same general lines: the primary character is poisoned, usually by his sweetheart; this is revealed through a conversation where he reports on the...
, where the title character was poisoned by his lover.

Mystery author Harriet Vane has been accused of the murder of her former lover, Phillip Boyes. Boyes was a novelist and essayist who wrote in support of atheism
Atheism
Atheism is, in a broad sense, the rejection of belief in the existence of deities. In a narrower sense, atheism is specifically the position that there are no deities...
, anarchy
Anarchy
Anarchy , has more than one colloquial definition. In the United States, the term "anarchy" typically is meant to refer to a society which lacks publicly recognized government or violently enforced political authority...
, and free love
Free love
The term free love has been used to describe a social movement that rejects marriage, which is seen as a form of social bondage. The Free Love movement’s initial goal was to separate the state from sexual matters such as marriage, birth control, and adultery...
. Professing to disapprove of marriage, he persuaded a reluctant Harriet to live with him against her principles and they led a Bohemian
Bohemianism
Bohemianism is the practice of an unconventional lifestyle, often in the company of like-minded people, with few permanent ties, involving musical, artistic or literary pursuits...
life in the London art community. A year later he proposed, and Harriet, outraged at being deceived into giving up her public honour, broke off the relationship.

During the year that followed, Boyes suffered from repeated bouts of gastric illness, while Harriet had bought several poisons under assumed names to test a plot point of her novel then in progress. Having returned from a holiday in North Wales in better health, Boyes dined with his cousin, the solicitor
Solicitor
Solicitors are lawyers who traditionally deal with any legal matter including conducting proceedings in courts. In the United Kingdom, a few Australian states and the Republic of Ireland, the legal profession is split between solicitors and barristers , and a lawyer will usually only hold one title...
Norman Urquhart, before going to Harriet's flat to discuss reconciliation. That night he was taken fatally ill, apparently with gastritis. He died four days later after an agonising period of suffering.

Although it was assumed at first that Boyes died of natural causes, an indiscreet nurse and some of Boyes' friends insisted that foul play was involved. A post-mortem revealed that Boyes' death was due to acute arsenic poisoning
Arsenic poisoning
Arsenic poisoning is a medical condition caused by increased levels of the element arsenic in the body. Arsenic interferes with cellular longevity by allosteric inhibition of an essential metabolic enzyme...
. Apart from the evening meal with his cousin, where every item was shared by two or more people, the only opportunity for poison to have been administered appeared to be in a cup of coffee, offered by Harriet Vane.

Harriet is tried, but the result is a "hung" jury, thanks in no small part to the presence of Wimsey's aide, Miss Climpson, on the jury. With fewer than ten of the jury agreeing on a verdict, the judge must order a fresh trial to be held.

Wimsey visits Harriet in prison, declares his conviction of her innocence, and promises to catch the real murderer. In the course of the interview he also openly admits his intention of marrying her, an offer which she politely but firmly declines. Working against time before the new trial, Wimsey first explores the possibility that Boyes took his own life. Wimsey's friend, Detective Inspector Charles Parker
Charles Parker (detective)
Charles Parker is a fictional police detective who appears in several Lord Peter Wimsey stories by Dorothy L. Sayers, and eventually becomes Lord Peter's brother-in-law.He is first introduced in Whose Body? as a Detective Inspector from Scotland Yard...
, conclusively disproves this notion, but Wimsey has planted a spy, Miss Joan Murchison, in Urquhart’s office and discovers the real culprit is Urquhart.

Suspecting Urquhart's story that he, not Boyes, is in line to inherit the considerable fortune of their senile great aunt, Wimsey sends Miss Climpson to get hold of the great-aunt’s will, which she does in a comic scene exposing the practices of fraudulent mediums
Spiritualism
Spiritualism is a belief system or religion, postulating the belief that spirits of the dead residing in the spirit world have both the ability and the inclination to communicate with the living...
. Not only does the will name Boyes as the principal heir, but in Urquhart's office, Miss Murchison finds evidence that, misusing his position as his own family's solicitor, Urquhart embezzled
Embezzlement
Embezzlement is the act of dishonestly appropriating or secreting assets by one or more individuals to whom such assets have been entrusted....
the majority of the great aunt's holdings and subsequently lost them on the stock market
Stock market
A stock market or equity market is a public entity for the trading of company stock and derivatives at an agreed price; these are securities listed on a stock exchange as well as those only traded privately.The size of the world stock market was estimated at about $36.6 trillion...
. Urquhart knew that if his great aunt died, he would be exposed. Boyes, however, was unaware that he was heir to the money. With him dead, Urquhart would inherit the estate and hence his fraud would not be revealed. Miss Murchison also discovers a packet of arsenic hidden in Urquhart's office.

Wimsey has now established motive and means, but not opportunity. But after re-examining the details of Boyes' famous last dinner (and perusing A.E. Housman's A Shropshire Lad
A Shropshire Lad
A Shropshire Lad is a cycle of sixty-three poems by the English poet Alfred Edward Housman . Some of the better-known poems in the book are "To an Athlete Dying Young", "Loveliest of Trees, the Cherry Now" and "When I Was One-and-Twenty".The collection was published in 1896...
, in which the poet likens reading dark poems to King Mithridates' self-immunization against poisons) , he realizes that Urquhart laced an omelette with arsenic and shared it with Boyes after having built up an immunity to the poison with small doses over a long period. Wimsey tricks Urquhart into an admission before witnesses.

At her retrial the prosecution presents no case and Harriet is set free. Exhausted by her ordeal, she again rejects Wimsey’s proposal of marriage.

It is also in this novel that Peter finally persuades Parker to propose to Peter's sister, Mary.

Also the Honourable Freddy Arbuthnot, Wimsey's friend and contact for the stock market, in this book finds a long-delayed domestic bliss with Rachel, the daughter of Sir Reuben Levy who was murdered in Whose Body?
Whose Body?
Whose Body? is a 1923 novel by Dorothy L. Sayers, which introduced the character of Lord Peter Wimsey.-Plot introduction:Lord Peter is intrigued by the sudden appearance of a naked body in the bath of an architect, and investigates...
.

Strong Poison was adapted for television in 1987 as part of a series starring Edward Petherbridge
Edward Petherbridge
Edward Petherbridge is a British actor. Among his many roles, he portrayed Lord Peter Wimsey in several screen adaptations of Dorothy L...
as Lord Peter and Harriet Walter
Harriet Walter
Dame Harriet Mary Walter, DBE is a British actress.-Personal life:She is the niece of renowned British actor Sir Christopher Lee, as the daughter of his elder sister Xandra Lee. On her father's side she is a great-great-great-granddaughter of John Walter, founder of The TimesShe was educated at...
as Harriet Vane. It was also adapted for radio with Ian Carmichael
Ian Carmichael
Ian Gillett Carmichael, OBE was an English film, stage, television and radio actor.-Early life:Carmichael was born in Hull, in the East Riding of Yorkshire. The son of an optician, he was educated at Scarborough College and Bromsgrove School, before training as an actor at RADA...
as Lord Peter and Ann Bell
Ann Bell
Ann Bell is a British actress, best known for playing war internee Marion Jefferson in the BBC World War II drama series Tenko during the early 1980s. She was born in Wallasey, Cheshire, daughter of John Forrest Bell and Marjorie Bell, and educated at Birkenhead High School...
as Harriet Vane, also part of a BBC radio series in 1973.

There are several more clear similarities between the two books. In both, the culprit's identity is obvious from early on, but Wimsey has to work hard to discover the motive and means. Moreover, in both the motive turns out to be the inheritance of a considerable sum of money, but in both there was no apparent need to commit murder since the culprit stood to get the money anyway—and the bulk of both books is spent in finding out why this was in fact not so.

A section of the plot is autobiographical. The part about the Bohemian
Bohemian
A Bohemian is a resident of the former Kingdom of Bohemia, either in a narrow sense as the region of Bohemia proper or in a wider meaning as the whole country, now known as the Czech Republic. The word "Bohemian" was used to denote the Czech people as well as the Czech language before the word...
relationship between Harriet and Boyes was inspired by Dorothy L. Sayers' fraught relationship with fellow-author John Cournos
John Cournos
John Cournos , a writer of Russian-Jewish background, was born in the Ukraine, whence his family emigrated when he was aged 10. During the 1910s and 1920s, he lived in Britain, where his literary career started...
. Cournos wanted her to ignore social mores and live with him without marriage, but she wanted to marry and have children. After a year of agony between 1921 and 1922, she learned that Cournos had claimed to be against marriage only to test her devotion, and she broke off with him.

Following this Sayers became involved in another relationship which resulted in an unwanted pregnancy. In 1924–25, in the period of her life following the delivery, Sayers wrote eleven letters to John Cournos about their unhappy relationship, her relationship with Bill White, and that with her son. The letters are now housed at Harvard University
Harvard University
Harvard University is a private Ivy League university located in Cambridge, Massachusetts, United States, established in 1636 by the Massachusetts legislature. Harvard is the oldest institution of higher learning in the United States and the first corporation chartered in the country...
. Both Sayers and Cournos eventually fictionalized their experience: Sayers in Strong Poison, published in 1930, and Cournos in The Devil is an English Gentleman, published in 1932.