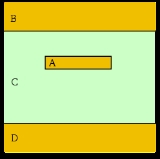 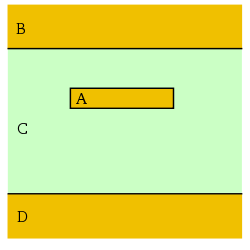 A stripline circuit
Integrated circuit
An integrated circuit or monolithic integrated circuit is an electronic circuit manufactured by the patterned diffusion of trace elements into the surface of a thin substrate of semiconductor material...
uses a flat strip of metal which is sandwiched between two parallel
Parallel (geometry)
Parallelism is a term in geometry and in everyday life that refers to a property in Euclidean space of two or more lines or planes, or a combination of these. The assumed existence and properties of parallel lines are the basis of Euclid's parallel postulate. Two lines in a plane that do not...
ground plane
Ground plane
In electrical engineering, a ground plane is an electrically conductive surface.-Radio antenna theory :In telecommunication, a ground plane structure or relationship exists between the antenna and another object, where the only structure of the object is a structure which permits the antenna to...
s. The insulating material of the substrate
Wafer (electronics)
A wafer is a thin slice of semiconductor material, such as a silicon crystal, used in the fabrication of integrated circuits and other microdevices...
forms a dielectric
Dielectric
A dielectric is an electrical insulator that can be polarized by an applied electric field. When a dielectric is placed in an electric field, electric charges do not flow through the material, as in a conductor, but only slightly shift from their average equilibrium positions causing dielectric...
. The width of the strip, the thickness of the substrate and the relative permittivity of the substrate determine the characteristic impedance
Characteristic impedance
The characteristic impedance or surge impedance of a uniform transmission line, usually written Z_0, is the ratio of the amplitudes of a single pair of voltage and current waves propagating along the line in the absence of reflections. The SI unit of characteristic impedance is the ohm...
of the strip which is a transmission line
Transmission line
In communications and electronic engineering, a transmission line is a specialized cable designed to carry alternating current of radio frequency, that is, currents with a frequency high enough that its wave nature must be taken into account...
. As shown in the diagram, the central conductor need not be equally spaced between the ground planes. In the general case, the dielectric material may be different above and below the central conductor.

To prevent the propagation of unwanted modes, the two ground planes must be shorted together. This is commonly achieved by a row of via
Via (electronics)
A via is a vertical electrical connection between different layers of conductors in a physical electronic circuit.- In IC :In integrated circuit design, a via is a small opening in an insulating oxide layer that allows a conductive connection between different layers. A via on an integrated circuit...
s running parallel to the strip on each side.

Like coaxial cable
Coaxial cable
Coaxial cable, or coax, has an inner conductor surrounded by a flexible, tubular insulating layer, surrounded by a tubular conducting shield. The term coaxial comes from the inner conductor and the outer shield sharing the same geometric axis...
, stripline is non-dispersive
Dispersion relation
In physics and electrical engineering, dispersion most often refers to frequency-dependent effects in wave propagation. Note, however, that there are several other uses of the word "dispersion" in the physical sciences....
, and has no cutoff frequency
Cutoff frequency
In physics and electrical engineering, a cutoff frequency, corner frequency, or break frequency is a boundary in a system's frequency response at which energy flowing through the system begins to be reduced rather than passing through.Typically in electronic systems such as filters and...
. Good isolation between adjacent traces can be achieved more easily than with microstrip
Microstrip
Microstrip is a type of electrical transmission line which can be fabricated using printed circuit board technology, and is used to convey microwave-frequency signals. It consists of a conducting strip separated from a ground plane by a dielectric layer known as the substrate. Microwave components...
.
Stripline provides for enhanced noise immunity against the propagation of radiated RF emissions, at the expense of slower propagation speeds.

A microstrip is similar to stripline transmission line except that the microstrip is not sandwiched, it is on a surface layer, above a ground plane.

Stripline is much harder (and more expensive) to fabricate than microstrip, and because of the second groundplane, the strip widths are much narrower for a given impedance and board thickness than for microstrip.

Stripline, now used as a generic term, was originally a proprietary brand of Airborne Instruments Laboratory Inc. (AIL). The version as produced by AIL was essentially air insulated with just a thin layer of dielectric material - just enough to support the conducting strip. The conductor was printed on both sides of the dielectric. The more familiar version with the space between the two plates completely filled with dielectric was originally produced by Sanders Associates
Sanders Associates
Sanders Associates was a defense contractor in Nashua, New Hampshire, USA, from 1951 until it was sold in 1986. It is now part of BAE Systems Electronics & Integrated Solutions, a subsidiary of BAE Systems. It concentrated on developing and manufacturing electronic systems, notably aircraft...
who marketed it under the brand name of triplate.