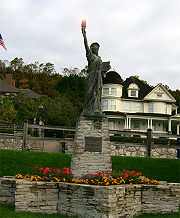 Hundreds of smaller replicas of the Statue of Liberty
Replicas of the Statue of Liberty
Hundreds of smaller replicas of the Statue of Liberty have been created worldwide.-Pont de Grenelle:This second Statue of Liberty in Paris is near the Grenelle Bridge on the Île aux Cygnes, a man-made island in the river Seine , 11.50 m high. Inaugurated on July 4, 1889, it looks southwest,...
have been created worldwide. The classical
Classical antiquity
Classical antiquity is a broad term for a long period of cultural history centered on the Mediterranean Sea, comprising the interlocking civilizations of ancient Greece and ancient Rome, collectively known as the Greco-Roman world...
appearance (Roman stola
Stola
The stola was the traditional garment of Roman women, corresponding to the toga, or the pallium, that were worn by men.Originally, women wore togas as well, but after the 2nd century BC, the toga was worn exclusively by men, and women were expected to wear the stola...
, sandals, facial expression) derives from Libertas
Libertas
Libertas was the Roman goddess and embodiment of liberty.- Temples and derived inspirations :In 238 BC, before the Second Punic War, having long been a Roman deity along with other personified virtues, Libertas assumed goddess status...
, ancient Rome's goddess of freedom from slavery, oppression, and tyranny. Her raised right foot is on the move. This symbol of Liberty
Liberty
Liberty is a moral and political principle, or Right, that identifies the condition in which human beings are able to govern themselves, to behave according to their own free will, and take responsibility for their actions...
and Freedom is not standing still or at attention in the harbor, it is moving forward, as her left foot tramples broken shackles
Fetters
Legcuffs, shackles, footcuffs, fetters or leg irons are a kind of physical restraint used on the feet or ankles to allow walking but prevent running and kicking. The term "fetter" shares a root with the word "foot"....
at her feet, in symbolism of the United States' wish to be free from oppression and tyranny.

Between 1949 and 1952, approximately two hundred 100-inch (2.5 m) replicas of the statue, made of stamped copper, were purchased by Boy Scout
Boy Scout
A Scout is a boy or a girl, usually 11 to 18 years of age, participating in the worldwide Scouting movement. Because of the large age and development span, many Scouting associations have split this age group into a junior and a senior section...
troops and donated in 39 states in the U.S. and several of its possessions and territories. The project was the brainchild of Kansas City businessman, J.P. Whitaker, who was then Scout Commissioner of the Kansas City Area Council.

The copper statues were manufactured by Friedley-Voshardt Co. (Chicago, Illinois) and purchased through the Kansas City Boy Scout office by those wanting one. The statues are approximately 8 feet tall without the base, constructed of sheet copper, weigh 290 pounds, and originally cost $350 plus freight. The mass-produced statues are not great art nor meticulously accurate (a conservator notes that "her face isn't as mature as the real Liberty. It's rounder and more like a little girl's"), but they are cherished. Many have been lost or destroyed, but preservationists have been able to account for about a hundred of them, and BSA
Boy Scouts of America
The Boy Scouts of America is one of the largest youth organizations in the United States, with over 4.5 million youth members in its age-related divisions...
Troop 101 of Cheyenne, Wyoming has collected photographs of over 100 of them.

Examples of the statues can be found at Fayetteville, Arkansas, Pine Bluff, Arkansas, Greeley, Colorado
Greeley, Colorado
The City of Greeley is a Home Rule Municipality that is the county seat and the most populous city of Weld County, Colorado, United States. Greeley is located in the region known as Northern Colorado. Greeley is situated north-northeast of the Colorado State Capitol in Denver. According to the...
, at the Mississippi riverfront in Burlington, Iowa
Burlington, Iowa
Burlington is a city in, and the county seat of Des Moines County, Iowa, United States. The population was 25,663 in the 2010 census, a decline from the 26,839 population in the 2000 census. Burlington is the center of a micropolitan area including West Burlington, Iowa and Middletown, Iowa and...
, and at Chimborazo Park
Chimborazo Park
Chimborazo Park is a park and historic land site in Richmond, Virginia, United States. Created in 1874, the park was the site of Chimborazo Hospital, one of the world's largest military hospitals.-Chimborazo Hospital:...
in Richmond, Virginia
Richmond, Virginia
Richmond is the capital of the Commonwealth of Virginia, in the United States. It is an independent city and not part of any county. Richmond is the center of the Richmond Metropolitan Statistical Area and the Greater Richmond area...
.

A Strengthen the Arm of Liberty brass pin was also available for uniform and civilian wear. The pin is in the shape of the Statue of Liberty superimposed on a fleur de lis. The Robbins Company, which made BSA's Eagle medals for many years, made these pins and the winged "R" hallmark is prominently displayed on the reverse. In addition, a commemorative neckerchief slide was made for Boy Scouts and for the Cub Scouts.

Over the years, the copper skins on several of the miniature statues began to take on oxidation, prefectly resembling the statue from which they are modeled, and several more had been renovated, and repaired, the statue in Burlington had been taken from its original position in Dankwardt Park, completely renovated, repaired, and polished, and then placed on a pedestal at the riverfront, where it sits today.