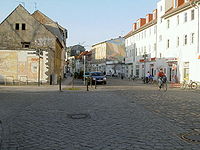 Strausberg is a city in Brandenburg
Brandenburg
Brandenburg is one of the sixteen federal-states of Germany. It lies in the east of the country and is one of the new federal states that were re-created in 1990 upon the reunification of the former West Germany and East Germany. The capital is Potsdam...
, Germany
Germany
Germany , officially the Federal Republic of Germany , is a federal parliamentary republic in Europe. The country consists of 16 states while the capital and largest city is Berlin. Germany covers an area of 357,021 km2 and has a largely temperate seasonal climate...
, located 30 km east of Berlin
Berlin
Berlin is the capital city of Germany and is one of the 16 states of Germany. With a population of 3.45 million people, Berlin is Germany's largest city. It is the second most populous city proper and the seventh most populous urban area in the European Union...
. With a population of 26,206 in 2010 it is the largest town in the district of Märkisch-Oderland
Märkisch-Oderland
Märkisch-Oderland is a Landkreis in the eastern part of Brandenburg, Germany. Neighboring are the district Barnim, the country Poland, the district-free city Frankfurt , the district Oder-Spree and the Bundesland Berlin...
.

Strausberg was founded around 1240 and in 1333 its first town hall was built. Today an historic defensive wall borders the old town. The town was the administrative seat of the Strausberg district until a 1993 merger with Bad Freienwalde
Bad Freienwalde
Bad Freienwalde is a spa town in the Märkisch-Oderland district in Brandenburg, Germany. It is situated on an old branch of the Oder river at the northwestern rim of the Oderbruch basin, east of Eberswalde, and northeast of Berlin, near the border with Poland...
and Seelow
Seelow
Seelow is a German town, seat of the Märkisch-Oderland, a district of Brandenburg.-Geography:It is situated in the extreme east of Germany, 70 km east of Berlin, 16 km west of the boundary with Poland.-History:...
formed "Märkisch-Oderland" with Seelow becoming the new administrative seat of the district.

Subdivision
The town is divided into nine boroughs (Gebiet): Fasanenpark, Gartenstadt, Hegermühle, Neue Mühle, Postbruch, Schillerhöhe (with the Spitzmühle), Strausberg Nord, Strausberg Stadt and Vorstadt.
The municipality has three hamlet
Hamlet
The Tragical History of Hamlet, Prince of Denmark, or more simply Hamlet, is a tragedy by William Shakespeare, believed to have been written between 1599 and 1601...
s (Ortsteile):

After an increase
Monotonic function
In mathematics, a monotonic function is a function that preserves the given order. This concept first arose in calculus, and was later generalized to the more abstract setting of order theory....
of population in last decades of 20th century, Strausberg has stopped her "growth" remaining at almost 26,000 inhabitants in last one, with a little decrease in early years of 2000.

Strausberg covers an area of 68 km2. Over 750 years old, it has a population of approx. 26,300 (the largest in its district). There are over 1500 businesses and 100 km of footpath.
It is known as "Die grüne Stadt am See" (the green city by the lake). Strausberg's forest and lakes are attractive, family friendly, and great for sporting. Its biggest lake is the "Straussee
Straussee
The Straussee is a lake, located in Strausberg, Brandenburg, Germany. It is situated about north-east of the city of Berlin. The town of Strausberg occupies the eastern shore of the lake, whilst the forest of the Strausberger Wald is on the western shore....
", located between the town and the biggest forest, the "Strausberger Wald". The forest and water protection nurtures a unique environment.

The town is served by Strausberg railway station
Strausberg station
Strausberg is the main railway station for the city of Strausberg in Brandenburg. It is served by the S-Bahn line .-Overview:There is also a station for the Strausberg Railway as well as Regional trains from Berlin Lichtenberg to Kostrzyn....
, situated some 6 kilometres (3.7 mi) to the south of the city, which is on the Berlin S-Bahn Line 5
S5 (Berlin)
S5 is a line on the Berlin S-Bahn. It operates from Strausberg Nord to Westkreuz over:*the Strausberg–Strausberg Nord line, completed in 1955 and electrified in 1956,...
and Deutsche Bahn
Deutsche Bahn
Deutsche Bahn AG is the German national railway company, a private joint stock company . Headquartered in Berlin, it came into existence in 1994 as the successor to the former state railways of Germany, the Deutsche Bundesbahn of West Germany and the Deutsche Reichsbahn of East Germany...
's Berlin Lichtenberg - Kostrzyn service. There are three other stops on the S5 line within the city, these being Strausberg Hegermühle, Strausberg Stadt and Strausberg Nord.

The town has also a small aerodrome
Aerodrome
An aerodrome, airdrome or airfield is a term for any location from which aircraft flight operations take place, regardless of whether they involve cargo, passengers or neither...
("Flugplatz Strausberg", ICAO
International Civil Aviation Organization
The International Civil Aviation Organization , pronounced , , is a specialized agency of the United Nations. It codifies the principles and techniques of international air navigation and fosters the planning and development of international air transport to ensure safe and orderly growth...
: EDAY) , opened in 1927, with a runway of 1.200 m × 28 m, and situated 2 kilometers in the east of town center. 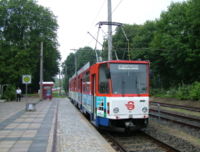 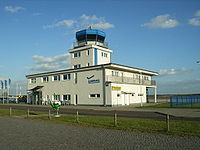