The AS-90 is used by five regiments of the Royal Horse Artillery
Royal Horse Artillery
The regiments of the Royal Horse Artillery , dating from 1793, are part of the Royal Regiment of Artillery of the British Army...
and Royal Artillery
Royal Artillery
The Royal Regiment of Artillery, commonly referred to as the Royal Artillery , is the artillery arm of the British Army. Despite its name, it comprises a number of regiments.-History:...
: 1 RHA, 3 RHA, 4 Regt RA, 19 Regt RA and 26 Regt RA, replacing the 105 mm FV433 Abbot SPG
FV433 Abbot SPG
FV433 Field Artillery, Self-Propelled "Abbot" is the self-propelled artillery variant of the British Army FV430 series of armoured fighting vehicles, using much of the chassis of the FV430 but with a fully rotating turret at the rear housing the 105 mm gun and given the vehicle designation of...
, the M109
M109 howitzer
The M109 is an American-made self-propelled 155 mm howitzer, first introduced in the early 1960s. It was upgraded a number of times to today's M109A6 Paladin...
155 mm SPG or the FH-70
FH-70
The FH-70 is a towed howitzer in use with several nations.-History:In 1963 NATO agreed a NATO Basic Military Requirement 39 for close support artillery, either towed or tracked. Subsequently Germany and UK started discussions and design studies and in 1968 established Agreed Operational...
155 mm towed gun.

AS-90 was designed and built by the Armaments division of Vickers Shipbuilding and Engineering (VSEL, owned by BAE Systems
BAE Systems
BAE Systems plc is a British multinational defence, security and aerospace company headquartered in London, United Kingdom, that has global interests, particularly in North America through its subsidiary BAE Systems Inc. BAE is among the world's largest military contractors; in 2009 it was the...
since 1999), who provided 179 vehicles from 1992 to 1995 at a cost of £300 million.

During 2008-09, the AS-90 underwent a capability enhancement program. This mostly involved replacement of electronics.

AS-90 started in the mid-1980s as a private venture on the 'gamble' that the tri-national SP70
SP70
SP70 Self propelled gun was a scheme setup by several European nations including the UK, Germany and Italy beginning in 1973. The project was shelved in favour of the US M109 which was already in service. The SP70 was 'outgunned' on several occasions by the M109 and further development was...
would fail. When this duly occurred, the Ministry of Defence
Ministry of Defence (United Kingdom)
The Ministry of Defence is the United Kingdom government department responsible for implementation of government defence policy and is the headquarters of the British Armed Forces....
(MoD) issued a cardinal point specification on one page for a new 155 mm SPG. Four tenders were submitted, and AS-90 was the only offer that was not 'brochureware'. The MoD was also required to consider the US "Paladin", an upgraded M109 howitzer
M109 howitzer
The M109 is an American-made self-propelled 155 mm howitzer, first introduced in the early 1960s. It was upgraded a number of times to today's M109A6 Paladin...
.

The MoD has undertaken studies in 2006-09 to "up gun" the Royal Navy's main shipboard gun armament, the 4.5 inch Mark 8 naval gun, to accept the 155 mm gun barrel and breech from the AS-90. This would introduce a common gun calibre for the British Army and Royal Navy
Royal Navy
The Royal Navy is the naval warfare service branch of the British Armed Forces. Founded in the 16th century, it is the oldest service branch and is known as the Senior Service...
, helping with ammunition logistics, and encouraging joint Army-Navy development of extended range and precision guided shells.

In 1963 certain NATO nations, including the UK, agreed a Ballistics Memorandum of Understanding for a 155 mm 39 calibre ordnance and a baseline projectile
Projectile
A projectile is any object projected into space by the exertion of a force. Although a thrown baseball is technically a projectile too, the term more commonly refers to a weapon....
with the shape used for the US M549 rocket-assisted
Rocket Assisted Projectile
A Rocket Assisted Projectile is an artillery or cannon round incorporating a rocket motor for independent propulsion. This grants the projectile both greater speed and range than an ordinary shell, which is propelled only by the ballistic force of the gun's exploding charge...
shell. The AS-90 uses a conforming 39 calibre barrel which fires the L15 unassisted projectile out to a range of 24.7 km. However, this was a new design of ordnance and uses a split sliding block breech
Breech-loading weapon
A breech-loading weapon is a firearm in which the cartridge or shell is inserted or loaded into a chamber integral to the rear portion of a barrel....
with Crossley obturation, instead of the more usual screw breech, to permit bagged charges (no metal cartridge cases). The breech mechanism has a primer magazine holding 18 primers.

It is fitted with an auxiliary power unit to eliminate the need to run the main engine
Engine
An engine or motor is a machine designed to convert energy into useful mechanical motion. Heat engines, including internal combustion engines and external combustion engines burn a fuel to create heat which is then used to create motion...
to keep the batteries charged while stationary; electrical servos drive the automated elevation, traverse, magazine, shell transfer arm and loader as well as power for electronics and communications.

The vehicle is fitted with an autonomous navigation and gun laying
Gun laying
Gun laying is the process of aiming an artillery piece, such as a gun, howitzer or mortar on land or at sea against surface or air targets. It may be laying for direct fire, where the gun is aimed similarly to a rifle, or indirect fire, where firing data is calculated and applied to the sights...
dynamic reference unit (DRU) mounted on the trunnion. All main turret functions are controlled by a Turret Control Computer (TCC) with control and display units for the No 1 (Detachment Commander), No 2 (loader) and No 3 (layer). The combination of the DRU, TCC and powered laying controls provide autolaying. Every gun is fitted with a radar Muzzle Velocity Measuring Device. Reversionary mode laying uses deflection laying via the direct fire sight.

The gun can be brought into action fully closed down, the barrel can be clamped and unclamped from within the vehicle. Into and out of action times are less than 1 minute. 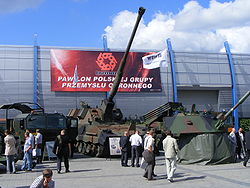 AS-90D - Modified for desert use. Thermal protection for crew and extra cooling for engine and machinery. Tracks adapted for reduced wear in sandy conditions.

AS-90 "Braveheart" - Basically the AS-90, but fitted with the 52 calibre length gun. This project was terminated due to non-compliant propelling charges.

Haubicoarmata "Krab" - (eng.
English language
English is a West Germanic language that arose in the Anglo-Saxon kingdoms of England and spread into what was to become south-east Scotland under the influence of the Anglian medieval kingdom of Northumbria...
Howitzer-cannon Crab
Crab
True crabs are decapod crustaceans of the infraorder Brachyura, which typically have a very short projecting "tail" , or where the reduced abdomen is entirely hidden under the thorax...
) Licensed "Braveheart" turret on a Polish chassis UPG, with modern "Azalia" BMS. Designed and integrated in Poland, by Huta Stalowa Wola and WB Electronics. , two Krab ("Crab") prototypes are built, and successfully completed all required evaluations and state acceptance trials. Order for 48 of 80 projected units for Polish Armed Forces
Polish Armed Forces
Siły Zbrojne Rzeczypospolitej Polskiej are the national defense forces of Poland...
is expected in 2008. Due to the use of a modified T-72 chassis the Indian Army
Indian Army
The Indian Army is the land based branch and the largest component of the Indian Armed Forces. With about 1,100,000 soldiers in active service and about 1,150,000 reserve troops, the Indian Army is the world's largest standing volunteer army...
is interested in this design.