Encyclopedia
Stock photography is the supply of photographs licensed for specific uses. It is used to fulfill the needs of creative assignments instead of hiring a photographer. Today, stock images can be presented in searchable online databases. They can be purchased and delivered online. Often, they are produced in studios using a wide variety of models
Model (person)
A model , sometimes called a mannequin, is a person who is employed to display, advertise and promote commercial products or to serve as a subject of works of art....
posing as professionals, stereotype
Stereotype
A stereotype is a popular belief about specific social groups or types of individuals. The concepts of "stereotype" and "prejudice" are often confused with many other different meanings...
s, expressing stereotypical emotions and gesticulations or involving pet
Pet
A pet is a household animal kept for companionship and a person's enjoyment, as opposed to wild animals or to livestock, laboratory animals, working animals or sport animals, which are kept for economic or productive reasons. The most popular pets are noted for their loyal or playful...
s. 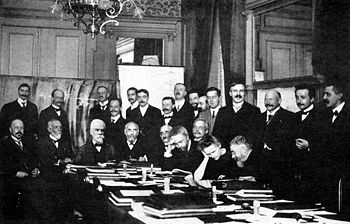 Whereas Getty and Corbis own the copyright to many of the images they sell, companies like Alamy
Alamy
Alamy is a privately owned stock photography agency launched in 1999. Its headquarters are at Milton Park, near Abingdon, Oxfordshire, U.K. It has a development and operations centre at Techno park in Trivandrum, Kerala, India and sales offices in Brooklyn, New York...
sell images on behalf of major collections and individual photographers and agencies.

With Rights Managed
Rights Managed
Rights Managed, or RM, in photography and the stock photo industry, refers to a copyright license which, if purchased by a user, allows the one time use of the photo as specified by the license. If the user wants to use the photo for other uses an additional license needs to be purchased. RM...
stock photography an individual licensing agreement is negotiated for each use. Royalty-free stock photography offers a photo buyer the ability to use an image in an unlimited number of ways for a single license fee. The client may, however, request "exclusive" rights, preventing other customers from using the same image for a specified length of time or in the same industry. Such sales can command many thousands of dollars, both because they tend to be high-exposure and because the agency is gambling that the image would not have made more money had it remained in circulation. However, with royalty free licensing there is no option for getting exclusive usage rights.

Some stock photography sites offer low-resolution photography free for the purpose of preparing advertising comps
Comprehensive layout
In graphic design and advertising, a comprehensive layout or comprehensive, usually shortened to comp, is the page layout of a proposed design as initially presented by the designer to a client, showing the relative positions of text and illustrations before the specific content of those elements...
to demonstrate a design. If the advertiser decides to use the image, the rights to use the high-resolution image then can be negotiated or purchased directly from the website.

Professional stock photographers place their images with one or more stock agencies on a contractual basis, with a defined commission basis and for a specified contract term. Some photographers fund their own photo shoots, or develop imagery in cooperation with an agency, while others submit photographs originally produced as part of editorial (magazine) or commercial assignments.

An important feature of web-based stock photography collections is that the images have been embedded with meta-data, therefore making the images searchable by using keywords.

Newspapers and magazines were first able to reproduce photographs instead of line drawings in the mid-1880s with the invention of the half-tone printing press
Printing press
A printing press is a device for applying pressure to an inked surface resting upon a print medium , thereby transferring the ink...
. Initially starting with staff photographers, eventually independent free-lance photographers took over.

One of the first major stock photography agencies was founded in 1920 by H. Armstrong Roberts, which continues today under the name RobertStock.

For many years, stock photography consisted largely of outtakes ("seconds") from commercial magazine assignments. By the 1980s, it had become a specialty in its own right, with photographers creating new material for the express purpose of submitting it to a stock house. Agencies attempted to become more sophisticated about following and anticipating the needs of advertisers and communicating these needs to photographers. Photographs were composed with more of an eye for how they might look when combined with other elements; for example, a photo might be shot vertically with space at the top and down the left side, with the conscious intention that it might be licensed for use as a magazine cover.

The 1980s saw a surge of interest into stock photography by individual freelance amateur and hobbyist photographers spurred on by the publication of a book series (5 editions 1981-1999) “Sell&ReSell your Photos”, Writer’s Digest Books, -Rohn Engh.

In the 1990s, a period of consolidation followed, with Getty Images and Corbis becoming the two largest companies as a result of acquisitions. Today, stock photography companies have largely moved online. In the early 2000s, Jupitermedia Corporation started buying some of the smaller players in the market, aggregating them under the banner of their Jupiterimages division, and became the third largest player in the market. The availability of the internet provided a means for other, smaller companies to get a foothold in the industry.

In the year 2000, istockphoto
IStockphoto
iStockphoto is an online, royalty free, international microstock photography provider operating with the micropayment business model. Images cost between 1 and 150 credits, depending on size and image collection .- History :The company was founded by Bruce Livingstone in May, 2000...
, a microstock image exchange website, began which later impacted the stock photo industry by driving prices of royalty-free images down as low as $1 per image. It was done because of the recent availability of high-resolution digital cameras in the mass market and the ability for amateur photographers to upload their images and share on the website.

In 2003, ShutterPoint, then later Dreamstime
Dreamstime
Dreamstime is a community-based stock photography agency and a major supplier of high quality digital images constituted in 2004 by Serban Enache . As of November 2010, the company had over 10 million images online, close to 100,000 contributors and more than 2,5 million users. Dreamstime is among...
, Shutterstock
ShutterStock
Shutterstock is a microstock photography website which maintains a library of royalty-free stock images available by subscription. Visitors can browse the entire image library for free, and can license and download images online through a variety of subscription offers.Shutterstock adds to its...
, 123RF.com and Fotolia
Fotolia
Fotolia is a microstock photography agency that is based in New York, New York. It was started by Oleg Tscheltzoff, Patrick Chassany, Thibaud Elziere in November 2005...
evolved existing models of image sharing and became established players. The trend was continued by fotoLibra
FotoLibra
fotoLibra is an open access picture library / stock agency. It was founded in 2002, produced a beta site in March 2004 and launched commercially in January 2005. It sells rights-managed and royalty-free images, with an approximate 80/20 split in favor of rights-managed. fotoLibra claims to be the...
in 2004 and in 2005 Scoopt started a photo news agency for citizen journalism
Citizen journalism
Citizen journalism is the concept of members of the public "playing an active role in the process of collecting, reporting, analyzing and disseminating news and information," according to the seminal 2003 report We Media: How Audiences are Shaping the Future of News and Information...
enabling the public to upload and sell breaking news images taken with cameraphones. In 2007 Scoopt was purchased by Getty Images, which closed it in 2009. In 2008, Cutcaster created a stock photography marketplace where buyers could purchase images at a price set by the photographer or let buyers name their price by submitting a bid, which a photographer could accept, reject or submit a new offer back to the buyer.