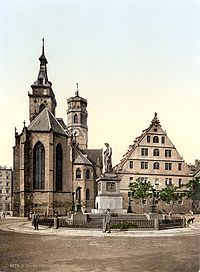 With the adoption of the Lutheran Protestant Reformation
Protestant Reformation
The Protestant Reformation was a 16th-century split within Western Christianity initiated by Martin Luther, John Calvin and other early Protestants. The efforts of the self-described "reformers", who objected to the doctrines, rituals and ecclesiastical structure of the Roman Catholic Church, led...
in Württemberg in 1534, all pictures and altars are removed from the naves, pewage and a gallery is added. The tombstones are moved to the interior of the church.

From 1574, small statues of all the Counts of Württemberg (i.e. since Ulrich I) are added at the North wall of the chancel.

In the 1950s, the church was restored, however, not in all historical detail.