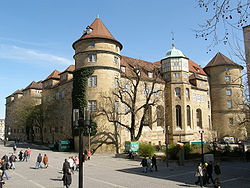 The first castle dated back to around 950 when Stuttgart was a settlement for breeding horses. In the 14th century it became the residence of the sovereign Counts of Württemberg
Württemberg
Württemberg , formerly known as Wirtemberg or Wurtemberg, is an area and a former state in southwestern Germany, including parts of the regions Swabia and Franconia....
. In the 16th century dukes Christopher
Christoph, Duke of Württemberg
Christoph of Württemberg, Duke of Württemberg ruled as Duke of Württemberg from 1550 until his death in 1568....
and Ludwig ordered it to be converted into a Renaissance
Renaissance
The Renaissance was a cultural movement that spanned roughly the 14th to the 17th century, beginning in Italy in the Late Middle Ages and later spreading to the rest of Europe. The term is also used more loosely to refer to the historical era, but since the changes of the Renaissance were not...
castle. Moats around the castle were removed in the 18th century.

In 1931 the castle was severely damaged by a fire and before it could be reconstructed it was damaged by bombing in the Second World War. The castle was finally renovated in 1969.