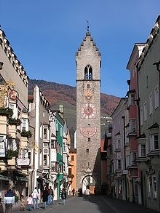 Encyclopedia
Sterzing is a comune in South Tyrol
South Tyrol
South Tyrol , also known by its Italian name Alto Adige, is an autonomous province in northern Italy. It is one of the two autonomous provinces that make up the autonomous region of Trentino-Alto Adige/Südtirol. The province has an area of and a total population of more than 500,000 inhabitants...
in the region of Trentino-Alto Adige/Südtirol, Italy
Italy
Italy , officially the Italian Republic languages]] under the European Charter for Regional or Minority Languages. In each of these, Italy's official name is as follows:;;;;;;;;), is a unitary parliamentary republic in South-Central Europe. To the north it borders France, Switzerland, Austria and...
. It is the main village of the southern Wipptal, and the Eisack
Eisack
The Eisack is a river in Northern Italy, the second largest river in South Tyrol. Its source is near the Brenner Pass, at an altitude of about 1990 m above sea level. The river draws water from an area of about 4,200 km². After about 96 km, it joins the Adige river south of Bolzano. At first the...
River flows through the medieval town.

The town traces its roots to 14 B.C., when Nero Claudius Drusus
Nero Claudius Drusus
Nero Claudius Drusus Germanicus , born Decimus Claudius Drusus also called Drusus, Drusus I, Nero Drusus, or Drusus the Elder was a Roman politician and military commander. He was a fully patrician Claudian on his father's side but his maternal grandmother was from a plebeian family...
founded a military camp called "Vipitenum" along the road between what are now Italy and Germany. Ancient ruins found nearby include a sepulchral monument dedicated to Postumia Vittorina, a milestone of the Imperator Septimus Severus period and a stone altar dedicated to Lord Mithras. In 550, following an invasion of Bavarii
Bavarii
The Bavarii were a Germanic tribe whose name emerged late in Teutonic tribal times. The full name originally was the Germanic *baio-warioz. This name has been handed down as Baiwaren, Baioaren, Bioras, latinised Bavarii, Baioarii. or Bavarii, Bavarians, Bajuwaren, Bajuvarii, Bajuwaren and Baiern....
, the town of Sterzing take place, the first mention of a town called Wibitina dates back to the years between 985 and 990. That name, which is still memorized in Wipptal
Wipptal
The Wipptal is a valley extending along the Sill River southward from Innsbruck, Tyrol, Austria, where the Sill meets the larger Inn river, up to the Brenner Pass at the Austro-Italian border, one of the lowest passes across the Central Eastern Alps...
, is traced back to the nearby Celto-Roman settlement *Vibidina. In 1180 the name Sterzengum appears in a document.

In 1280 Meinhard, Duke of Carinthia
Meinhard, Duke of Carinthia
Meinhard II from the House of Meinhardin was ruling Count of Gorizia from 1258 until 1271 and Count of Tyrol from 1258 until his death...
promote the village to the rank of city. As the region's proximity to Brenner Pass
Brenner Pass
- Roadways :The motorway E45 leading from Innsbruck via Bolzano to Verona and Modena uses this pass, and is one of the most important north-south connections in Europe...
made it a frequent trade route, the Fugger
Fugger
The Fugger family was a historically prominent group of European bankers, members of the fifteenth and sixteenth-century mercantile patriciate of Augsburg, international mercantile bankers, and venture capitalists like the Welser and the Höchstetter families. This banking family replaced the de'...
of Augsburg
Augsburg
Augsburg is a city in the south-west of Bavaria, Germany. It is a university town and home of the Regierungsbezirk Schwaben and the Bezirk Schwaben. Augsburg is an urban district and home to the institutions of the Landkreis Augsburg. It is, as of 2008, the third-largest city in Bavaria with a...
opened a branch to sort the products of the nearby silver mines in Ridnaun Valley and Pfleres Valley. Sterzing knew its magnificence in 15th and 16th centuries after the 1443 fire who destroyed part of the town. New embattled houses were built, some late gothic style, in Neustadt (New Town) as: Town and Regional Trial House (1450), Hotel "Goldenes Kreuz" (1446), Fugger's Branch (1553), Rafenstein House (former Köchl, 1472), the Town Hall (1473), Geizkofler House (1600) and the Mining District House (1500) all still in use.

In the course of the Italianization of South Tyrol
Italianization of South Tyrol
In 1919, at the time of its annexation, the southern part of Tyrol was inhabited by almost 90% German speakers. Under the 1939 South Tyrol Option Agreement, Adolf Hitler and Benito Mussolini determined the status of the German people living in the province...
, the modern Italian name of the town Vipiteno - created from the old roman settlement of Vipitenum was made official. Throughout the late 1940s and early 1950s a number wanted Nazis stayed in Sterzing at the Hotel Goldenes Kreuz which still exists today. At different times people like Erich Priebke
Erich Priebke
Erich Priebke is a former Hauptsturmführer in the Waffen SS. In 1996 he was convicted of war crimes in Italy, for participating in the massacre at the Ardeatine caves in Rome, on March 24, 1944...
, Adolf Eichmann
Adolf Eichmann
Adolf Otto Eichmann was a German Nazi and SS-Obersturmbannführer and one of the major organizers of the Holocaust...
and Josef Mengele
Josef Mengele
Josef Rudolf Mengele , also known as the Angel of Death was a German SS officer and a physician in the Nazi concentration camp Auschwitz-Birkenau. He earned doctorates in anthropology from Munich University and in medicine from Frankfurt University...
were in transit here as they waited for forged passports for their journey out of Europe and by ship to South America.

Parish "Our Lady of Marsh"

The Parish is the biggest church between Verona and Munich, was built from 1417 to 1451. The gothic altar, wood-work by Hans Multscher
Hans Multscher
Hans Multscher was a German sculptor and painter.Multscher was born in Reichenhofen .He made himself with new artistic styles from northern France and the Netherlands, and became a free citizen of the city of Ulm in 1427. There, he married Adelheid Kitzin the same year...
of Ulm , is 12 meter high and was completed in 1458. The church was later enlarged from 1497 to 1525 by Hans Lutz. In 1753 was than modified in baroque style, with paintings by Adam Mőlckh and the gothic altar removed; at present time the altar is showed at the Multscher Museum.

Holy Spirit is the oldest gothic church in town. Built in 1399, in the same main building of the old Hospital, is located in Town Square; the nave is painted in fresco by Giovanni of Bruneck (1402).

The Zwölferturm is a 46 m. high tower erected in 1470, it is the symbol of the city that divides the New Town from Old Town. A fire in 1867 destroyed the original spire, which was replaced with the existing embattled roof.

Built in 1468 - 1472 in late gothic style while, the angular "Erker" was added in 1526. In the patio take place a roman stone altar, dedicated to Lord Mithras and a milestone of the Imperator Septimus Severus; the same period the military road was completed in 200 A.D.

Is the main street in the old city centre with buildings erected, after the 1417 fire, between XIV and XV century when the town was prosperous with the trade and the silver mines in the nearby Ridnaun Valley and Pflersch Valley.

According to the 2001 census, 75.28% of the population speak German, 24.29% Italian and 0.44% Ladin
Ladin
Ladin is a language consisting of a group of dialects spoken in the Dolomite Mountains in Northern Italy in the border regions of the provinces Trentino, South Tyrol and Belluno...
as first language.

Sterzing is home of the Leitner Group
Leitner Group
Leitner Group is an Italian conglomerate, based in the province of South Tyrol, that owns and runs several industrial and equipment companies....
, an international industry, a manufacturer of cable systems, snowgroomer, utility tracked vehicles, systems for urban rail called minimetrò
MiniMetro
The Minimetrò is an automated people mover on rail, built by the Leitner Group from South Tyrol in northern Italy. Leitner has a test track for the vehicles in Sterzing. Current maximum capacity of the system is around 8000 passengers per hour.-Perugia:...
and wind turbines.