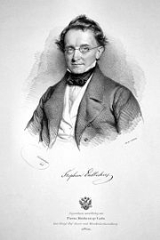 Encyclopedia
Stephan Ladislaus Endlicher (24 June 1804 – 28 March 1849) was an Austrian
Austrian Empire
The Austrian Empire was a modern era successor empire, which was centered on what is today's Austria and which officially lasted from 1804 to 1867. It was followed by the Empire of Austria-Hungary, whose proclamation was a diplomatic move that elevated Hungary's status within the Austrian Empire...
botanist, numismatist and Sinologist. He was a director of the Botanical Garden of Vienna
Vienna
Vienna is the capital and largest city of the Republic of Austria and one of the nine states of Austria. Vienna is Austria's primary city, with a population of about 1.723 million , and is by far the largest city in Austria, as well as its cultural, economic, and political centre...
. He was born in Pressburg (Bratislava)
Bratislava
Bratislava is the capital of Slovakia and, with a population of about 431,000, also the country's largest city. Bratislava is in southwestern Slovakia on both banks of the Danube River. Bordering Austria and Hungary, it is the only national capital that borders two independent countries.Bratislava...
and died in Vienna.

Endlicher studied theology and received minor orders. In 1828 he was appointed to the Austrian national library to reorganize its manuscript collection. Concurrently he studied Natural History, in particular botany, and East-Asian languages. He wrote the fundamentals of Chinese grammar.

In 1840 Endlicher became professor at and director of the Botanical Garden of Vienna. He wrote a comprehensive description of the Plant Kingdom according to a natural system, at the time its most comprehensive description. As proposed by Endlicher, it contained images with text. It was published together with the reissue of Franz Unger
Franz Unger
Franz Joseph Andreas Nicolaus Unger was an Austrian botanist, paleontologist and plant physiologist.- Life and work :...
's "Grundzüge der Botanik" (Fundamentals of Botany).

Endlicher was fundamental in establishing the Imperial Academy of Science (Akademie der Wissenschaften), but when contrary to his expectations the Baron Joseph Hammer von Purgstall was elected its president in his stead, he resigned in a tiff.

As a known liberal, Endlicher was asked to act as mediator during the revolution of 1848, but eventually was forced to leave Vienna for a time. In 1848 he also became a member of the Frankfurt Parliament
Frankfurt Parliament
The Frankfurt Assembly was the first freely elected parliament for all of Germany. Session was held from May 18, 1848 to May 31, 1849 in the Paulskirche at Frankfurt am Main...
and the assembly at Kremsier (Kroměříž)
Kromeríž
Kroměříž is a town in the Zlín Region of the Czech Republic. The town's main landmark is the Baroque Kroměříž Bishop's Palace, where some scenes from Amadeus and Immortal Beloved were filmed...
.

Endlicher established the botanical journal Annalen des Wiener Museums der Naturgeschichte (1835 and on). He began the work Flora Brasiliensis
Flora Brasiliensis
Flora Brasiliensis is a book published between 1840 and 1906 by the editors Carl Friedrich Philipp von Martius, August Wilhelm Eichler, Ignatz Urban and many others...
with Martius
Martius
Martius may refer to:* an adjectival form of the theonym Mars in Latin:** Campus Martius, the "Field of Mars" in ancient Rome** Martius, the month of March; see Roman calendar**Telo Martius, an ancient name for Toulon, France...
. He also published early works on the flora of Australia
Australia
Australia , officially the Commonwealth of Australia, is a country in the Southern Hemisphere comprising the mainland of the Australian continent, the island of Tasmania, and numerous smaller islands in the Indian and Pacific Oceans. It is the world's sixth-largest country by total area...
, including the plants collected by Carl von Hugel.

Endlicher described many new plant
Plant
Plants are living organisms belonging to the kingdom Plantae. Precise definitions of the kingdom vary, but as the term is used here, plants include familiar organisms such as trees, flowers, herbs, bushes, grasses, vines, ferns, mosses, and green algae. The group is also called green plants or...
genera
Genus
In biology, a genus is a low-level taxonomic rank used in the biological classification of living and fossil organisms, which is an example of definition by genus and differentia...
, perhaps most notably the genus Sequoia.

The genus Endlicheria
Endlicheria
Endlicheria is a genus of plant in family Lauraceae. Endlicheria is a neotropical genus consisting of approximately 60 species occurring mostly in the norther South America and Amazon region.-Overview:...
of the family Lauraceae
Lauraceae
The Lauraceae or Laurel family comprises a group of flowering plants included in the order Laurales. The family contains about 55 genera and over 3500, perhaps as many as 4000, species world-wide, mostly from warm or tropical regions, especially Southeast Asia and South America...
was named in his honour.