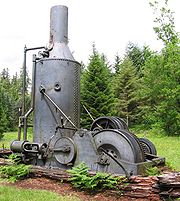 Steam donkey, or donkey engine is the common nickname for a steam-powered
Steam engine
A steam engine is a heat engine that performs mechanical work using steam as its working fluid.Steam engines are external combustion engines, where the working fluid is separate from the combustion products. Non-combustion heat sources such as solar power, nuclear power or geothermal energy may be...
winch, or logging engine widely used in past logging
Logging
Logging is the cutting, skidding, on-site processing, and loading of trees or logs onto trucks.In forestry, the term logging is sometimes used in a narrow sense concerning the logistics of moving wood from the stump to somewhere outside the forest, usually a sawmill or a lumber yard...
operations, though not limited to logging. They were also found in the mining
Mining
Mining is the extraction of valuable minerals or other geological materials from the earth, from an ore body, vein or seam. The term also includes the removal of soil. Materials recovered by mining include base metals, precious metals, iron, uranium, coal, diamonds, limestone, oil shale, rock...
, maritime, and nearly any other industry that needed a powered winch
Winch
A winch is a mechanical device that is used to pull in or let out or otherwise adjust the "tension" of a rope or wire rope . In its simplest form it consists of a spool and attached hand crank. In larger forms, winches stand at the heart of machines as diverse as tow trucks, steam shovels and...
.

Steam donkeys acquired their name from their origin in sailing ships, where the "donkey" engine was typically a small secondary engine used to load and unload cargo and raise the larger sails with small crews, or to power pumps. They were classified by their cylinder type – simplex (single-acting cylinder), or duplex (a compound engine); by their connection to the winches (or "drums") – triple-drum, double-drum, etc; and by their different uses: high-lead yarder
Yarder
A yarder is piece of logging equipment which uses a system of cables to pull or fly logs from the stump to the landing. It generally consists of an engine, drums, and spar, but has a range of such as the Swing yarder.-Early Yarders:...
, ground-lead yarder, loader, snubber, incline hoist, etc. A good deal of the cable-logging terminology derived from 19th century merchant sailing, as much of the early technology originated from that industry.

A logging engine comprised at least one powered winch
Winch
A winch is a mechanical device that is used to pull in or let out or otherwise adjust the "tension" of a rope or wire rope . In its simplest form it consists of a spool and attached hand crank. In larger forms, winches stand at the heart of machines as diverse as tow trucks, steam shovels and...
around which was wound hemp rope or (later) steel cable. They were usually fitted with a boiler
Boiler
A boiler is a closed vessel in which water or other fluid is heated. The heated or vaporized fluid exits the boiler for use in various processes or heating applications.-Materials:...
, and usually equipped with skids, or sleds made from logs, to aid them during transit from one "setting" to the next. The larger steam donkeys often had a "donkey house" (a makeshift shelter for the crew) built either on the skids or as a separate structure. Usually a water tank, and sometimes a fuel oil tank was mounted on the back of the sled. In rare cases, steam donkeys were also mounted on wheels. Later steam donkeys were built with multiple horizontally-mounted drums/spools, on which were wound heavy steel cable instead of the original rope.

This describes the use of a steam donkey for logging operations. In the simplest setup, a "line horse
Horse
The horse is one of two extant subspecies of Equus ferus, or the wild horse. It is a single-hooved mammal belonging to the taxonomic family Equidae. The horse has evolved over the past 45 to 55 million years from a small multi-toed creature into the large, single-toed animal of today...
" would carry the cable out to a log in the woods. The cable would be attached, and, on signal, the steam donkey's operator (engineer) would open the regulator, allowing the steam donkey to drag or "skid" the log towards it. The log was taken either to a mill or to a "landing" where the log would be transferred for onward shipment by rail, road or river (either loaded onto boats or floated directly in the water). Later a "haulback" drum was added, where a smaller cable could be routed around the "setting" and connected to the end of the heavier "mainline" to replace the line horse.

If a donkey was to be moved, one of its cables was attached to a tree, stump or other strong anchor, and the machine would drag itself overland to the next yarding location.

John Dolbeer
John Dolbeer
John Dolbeer was a partner in the Dolbeer & Carson Lumber Co., one of the early major Humboldt County, California lumber operations in based in Eureka. While in that business, he invented the logging engine, more commonly known as the steam donkey or donkey engine...
, a founding partner of the Dolbeer and Carson Lumber Company in Eureka, California
Eureka, California
Eureka is the principal city and the county seat of Humboldt County, California, United States. Its population was 27,191 at the 2010 census, up from 26,128 at the 2000 census....
, invented the logging engine in that city in August 1881. The patent (number: 256553) was issued April 18, 1882. On Dolbeer's first model, a 150-foot, 4½ inch manila rope was wrapped several times around a gypsy head (vertically mounted spool) and attached at the other end to a log.

The invention of the internal-combustion engine led to the development of the diesel-powered tractor crawler, which eventually put an end to the steam donkey. Though some have been preserved in museums, very few are in operating order. A great number still sit abandoned in the forests.

Steam donkeys were also found to be useful for powering other machines such as pile driver
Pile driver
A pile driver is a mechanical device used to drive piles into soil to provide foundation support for buildings or other structures. The term is also used in reference to members of the construction crew that work with pile-driving rigs....
s, slide-back loaders (also known as "slide-jammers", cranes which were used to load logs onto railroad cars and which moved along the flat-bed rail cars that were to be loaded), and cherry-pickers (a sled-mounted crane used for loading, onto railroad cars, logs that a grading crew had cut down).

An auxiliary engine on a sailing craft (which does propel the vessel) is still sometimes informally known as "the donk".

Another steam donkey is preserved at Legoland Billund
Legoland Billund
Legoland Billund, the original Legoland park, opened in 1968 in Billund, Denmark. The Park is located next to the original Lego factory and Denmark's second busiest airport Billund Airport. 1.6 million guests visited the park in 2007 and over the years more than 40 million guests have been through...
on their Wild West gold mine themed railroad.
On August 1, 2009 a Steam Donkey was officially unveiled at McLean Mill National Historic Site
McLean Mill National Historic Site
McLean Mill National Historic Site is a steam-operated sawmill on Vancouver Island, officially open to tourists since July 1, 2000.-History:The mill originally ran as a family operated saw-milling business from 1926 to 1965...
in Port Alberni, British Columbia
Port Alberni, British Columbia
Port Alberni is a city located in the province of British Columbia in Canada. It is the location of the head offices of the Alberni-Clayoquot Regional District. The city has a total population of 17,743, and the census agglomeration area a total of 25,396....
. It is now the only commercially operating steam donkey in North America. On that occasion, due to extreme fire risk, demonstrations of the donkey were not performed but the logs hauled by previous test runs of the donkey (and had been loaded onto a truck) were dumped into the McLean Mill millpond, representing the first steam-powered commercial logging operation in North America for decades. This machine continued to operate after R. B. Mclean shuttered the steam-powered McLean Mill site in 1965. It ran until 1972 and was abandoned on site. It was restored by the Alberni Valley Industrial Heritage Society in 1986 for Expo 86
Expo 86
The 1986 World Exposition on Transportation and Communication, or simply Expo '86, was a World's Fair held in Vancouver, British Columbia, Canada from Friday, May 2 until Monday, October 13, 1986...
and more recently was re-certified for commercial use at McLean Mill. Agreements have been made with forest land owner Island Timberlands (owned by Brookfield Asset Management
Brookfield Asset Management
Brookfield Asset Management Inc. is a Toronto, Ontario-based asset management company that manages a global portfolio of assets valued at over $150 billion...
) to log, mill, and sell, trees and lumber from the surroundings of McLean Mill.

A wide-face steam donkey (called that because the width of the drum is greater in proportion to that in later machines) has been operational at the Tillamook County Pioneer Museum in Tillamook, Oregon since the early 1980s. Manufactured by the Puget Sound Iron & Steel Works in the early 1900s, this donkey was abandoned in the woods when the Reiger family finished logging their land in about 1952. The steam donkey was rescued and restored from 1979 to 1981. It was donated to the Pioneer Museum by the Ned Rieger family and has been on display on the Museum grounds.