Encyclopedia
Stationery has historically meant a wide gamut of materials: paper
Paper
Paper is a thin material mainly used for writing upon, printing upon, drawing or for packaging. It is produced by pressing together moist fibers, typically cellulose pulp derived from wood, rags or grasses, and drying them into flexible sheets....
and office supplies
Office supplies
Office supplies is the generic term that refers to all supplies regularly used in offices by businesses and other organizations, from private citizens to governments, who work with the collection, refinement, and output of information .The term includes small, expendable, daily use items such as...
, writing implement
Writing implement
A writing implement or writing instrument is an object used to produce writing. Most of these items can be also used for other functions such as painting, drawing and technical drawing, but writing instruments generally have the unique requirement to create a smooth, controllable line.Another...
s, greeting card
Greeting card
A greeting card is an illustrated, folded card featuring an expression of friendship or other sentiment. Although greeting cards are usually given on special occasions such as birthdays, Christmas or other holidays, they are also sent to convey thanks or express other feeling. Greeting cards,...
s, glue
Glue
This is a list of various types of glue. Historically, the term "glue" only referred to protein colloids prepared from animal flesh. The meaning has been extended to refer to any fluid adhesive....
, pencil case
Pencil case
A pencil case or pencil box is a container used to carry pencils. A pencil case can also contain a variety of other stationery such as a pencil sharpener, pens, erasers, a stapler, and a calculator....
etc.

Originally the term "stationery" referred to all products sold by a stationer, whose name indicates that his book shop was on a fixed spot, usually near a university, and permanent, while medieval trading was mainly peddler
Peddler
A peddler, in British English pedlar, also known as a canvasser, cheapjack, monger, or solicitor , is a travelling vendor of goods. In England, the term was mostly used for travellers hawking goods in the countryside to small towns and villages; they might also be called tinkers or gypsies...
s (including chapmen
Chapmen
A chapman was an itinerant dealer or hawker in early modern Britain.-Etymology:Old English céapmann was the regular term for "dealer, seller", cognate to the synonymous Dutch koopman....
, who sold books) and others (such as farmers and craftsmen) at non-permanent markets such as fair
Fair
A fair or fayre is a gathering of people to display or trade produce or other goods, to parade or display animals and often to enjoy associated carnival or funfair entertainment. It is normally of the essence of a fair that it is temporary; some last only an afternoon while others may ten weeks. ...
s. It was a special term used between the 13th and 15th centuries in the manuscript culture
Manuscript culture
Manuscript culture uses manuscripts to store and disseminate information; in the West, it generally preceded the age of printing. In early manuscript culture monks copied manuscripts by hand, mostly religious texts. Medieval manuscript culture deals with the transition of the manuscript from the...
. The Stationers' Company formerly held a monopoly over the publishing industry in England and was responsible for copyright
Copyright
Copyright is a legal concept, enacted by most governments, giving the creator of an original work exclusive rights to it, usually for a limited time...
regulations.

In its modern sense of (often personalized) writing materials, stationery has been an important part of good social etiquette
Etiquette
Etiquette is a code of behavior that delineates expectations for social behavior according to contemporary conventional norms within a society, social class, or group...
, particularly since the Victorian era
Victorian era
The Victorian era of British history was the period of Queen Victoria's reign from 20 June 1837 until her death on 22 January 1901. It was a long period of peace, prosperity, refined sensibilities and national self-confidence...
. Some usages of stationery, such as sending a manufactured reply card to a wedding invitation, has changed from offensive to appropriate. Many of these social guidelines may have been defined by the manufacturers of stationery products themselves, such as "Crane's Blue Book of Stationery" showing so much influence by Crane & Co. that the company name is included in the title.

The usage and marketing of stationery is a niche industry that is increasingly threatened by electronic media
Electronic media
Electronic media are media that use electronics or electromechanical energy for the end-user to access the content. This is in contrast to static media , which today are most often created electronically, but don't require electronics to be accessed by the end-user in the printed form...
. As stationery is intrinsically linked to paper and the process of written, personalized communication, many techniques of stationery manufacture are employed, of varying desirability and expense. The most familiar of these techniques are letterpress printing, embossing, engraving, and thermographic printing (often confused with thermography
Thermography
Infrared thermography, thermal imaging, and thermal video are examples of infrared imaging science. Thermal imaging cameras detect radiation in the infrared range of the electromagnetic spectrum and produce images of that radiation, called thermograms...
). Flat printing and offset printing are regularly used, particularly for low cost or informal needs. 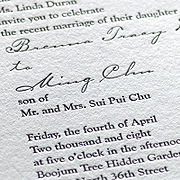 Letterpress is a printing method that requires characters being impressed upon the page. The print may be inked or blind but is typically done in a single color. Motifs or designs may be added as many letterpress machines use movable plates that must be hand-set. 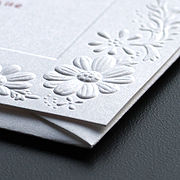 Embossing is a printing technique used to create raised surfaces in the converted paper stock. The process relies upon mated dies that press the paper into a shape that can be observed on both the front and back surfaces. 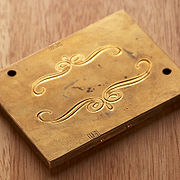 Engraving
Engraving
Engraving is the practice of incising a design on to a hard, usually flat surface, by cutting grooves into it. The result may be a decorated object in itself, as when silver, gold, steel, or glass are engraved, or may provide an intaglio printing plate, of copper or another metal, for printing...
is a process that requires a design to be cut into a plate made of a relatively hard material. It is a technology with a long history and requires significant skill and experience. The finished plate is usually covered in ink, and then the ink is removed from all of the un-etched portions of the plate. The plate is then pressed into paper under substantial pressure. The result is a design that is slightly raised on the surface of the paper and covered in ink. Due to the cost of the process and expertise required, many consumers opt for thermographic printing, a process that results in a similarly raised print surface, but through different means at less cost. 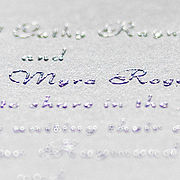 Thermographic printing
Thermographic printing
Thermographic printing refers to two types of printing, both of which rely on heat to create the letters or images on a sheet of paper.The simplest type is where the paper has been coated with a material that changes colour on heating. This is called thermal printing and was used in older model...
is a process that involves several stages but can be implemented in a low-cost manufacturing process. The process involves printing the desired designs or text with an ink that remains wet, rather than drying on contact with the paper. The paper is then dusted with a powdered polymer that adheres to the ink. The paper is vacuumed or agitated, mechanically or by hand, to remove excess powder, and then heated to near combustion. The wet ink and polymer bond and dry, resulting in a raised print surface similar to the result of an embossing process.